Good morning, everyone! We can win at home? We swept the season series with the Penguins? Always something different with this team. Nice to start the morning with a win!

Here are trade scenarios for every Bruins player. This is tongue-in-cheek. I'm sorry. https://t.co/MzW14DmDOj

I woke up this morning thinking it was Wednesday and I had to get ready for some more job talk fun. No, that was yesterday.

I actually didn’t watch the game last night. I needed to watch fluffy shows and have pizza. I was also kinda worried that watching it would jinx them. I know it’s not logically possible, but it’s how I roll.

Also talked to a Swedish guy on Twitter who said he thought the Bruins were a “classic” team and that his favorite player there was Bergeron*. That’s a nice change of pace.

On tap, coffee that I am apparently not drinking fast enough.

* I do not like when spell check tells me this isn’t a correctly spelled word. Spell check is missing out.

Means they’re gearing up for a Cup run. If they don’t get it this year, they’ll get it next. Because Thorty brings the Cup.

We just lost power in the building for about 10 seconds. All the pages for technicians have begun.

Bullet points, for your pleasure:

Morning everyone. Bullet points for your pleasure: 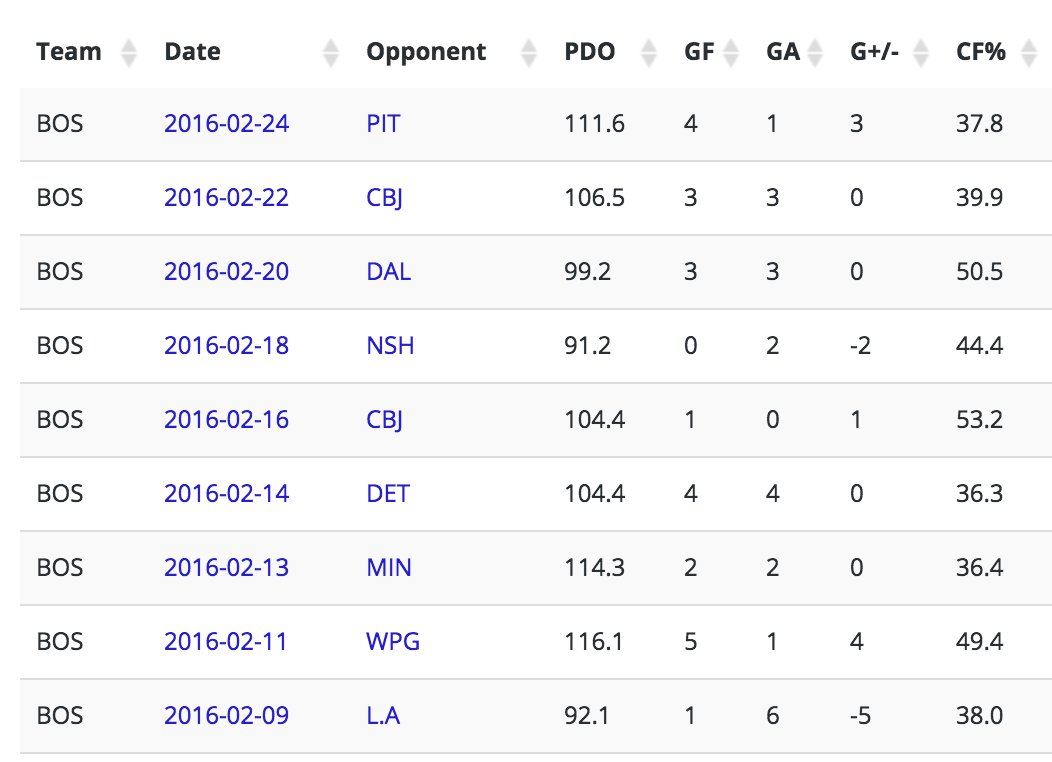 Some of those PDO’s are a sight to behold.

What a surprise. The Bruins broke logic.

That game was heavily affected by score effects I think. Minnesota was chasing from the very start of the game, so getting wildly (heh) outshot makes sense, but wow thats savage

I only know a little about PDO and trust it even less, but wow, the Winnipeg and Minnesota games look positively awful, and meanwhile…the 7-3 Dallas game is one of the lower values in that chart.

PDO is pretty straightforward. Add a team’s shooting % and save % together and you have their PDO. PDO doesn’t actually stand for anything – it was just the username of someone on a hockey site who came up with the stat or some similar story.

So where does the luck part come in? If a team is having a lot of success, but their PDO for the season to that point is over 102, then they’re probably getting a lot of bounces going their way or riding a hot goalie, or both. A PDO over 102.0 is generally not sustainable over the course of a whole season. Similarly, if a team is in the middle of a slump, but their PDO is below 98.0, then some amount of unluckiness is probably involved.

For individual games, PDO varies very wildly, as you can see from the recent Bruins game data that Handgrenaid posted. If you see that for a given game your team has a CF% significantly below 50% and a PDO well above 102, then your friend on a rival team will most certainly be complaining to you that their team really won the game because they had all the Corgis, except for the part where they really lost, and they only lost because you were lucky.

There’s a misconception out there that PDO is supposed to regress to 100.0. That’s not true – 100.0 is the average of ALL teams. Each team has its own PDO resting point. For good teams, it’ll be a little above 100.0, for bad teams it’ll be a little below 100.0. Good teams tend to have good goalies and better shooting, bad teams tend to have bad goalies and worse shooting.

I was wondering if the PDO “resting point” for each team was individual to themselves or if it was “supposed” to be 100.00 across the boards.

I seriously don’t like paying too much attention to this stat cause I know people who use it to complain about why their team didn’t make the playoffs and another one did, but you explained it pretty painlessly.

I prefer 5-on-5 goal differential over 5-on-5 CF% as an indicator of performance. We’re +1 in that stretch. Room for improvement for sure, but that’s been the theme all season.

I’m not trying to denigrate the record the Bruins have managed over that time, but time and time again the sustainability of success with numbers like these hasn’t been there. Something clearly does need to be fixed here.

5-on-5 CF% above 50% includes Toronto, Winnipeg, Montreal, and Carolina.

Only non-playoff team at the moment with a positive 5-on-5 goal differential is Minnesota.

is it too early to start drinking?

I don’t understand the question.

nonsense is hovering around a 6 right now. Will regroup after finishing the coffee & hitting lunch. Could go either way. Not looking good though

It is in my job description to tell you that no, it’s never too early.

This is why you got a promotion.

Yesterday I ventured to another website because I was curious. I saw two people bashing the South. I really wanted to rant, but I changed my mind.

I was born and raised in the South. Yes, we have people that might support one’s negative stereotype, but we are diverse group and we are culturally rich.

It’s interesting being an American in Europe, as I consistently find that Europeans think that Americans are all one kind of people. I make sure to explain to them that we’re a big country with a lot of different kinds of people, all with different needs, different values, different cultures, and different things to offer.

One of the best trips you can make is to New Orleans. Apart from it being, in my opinion, the most important city in America (it’s the nexus of our intra-national superhighway river network), you get to see (and hear!) your nation through a French colonial filter. You’ll try American cuisine you’ve never heard of before.

Another great place to visit is Louisville, Kentucky. Oh, right, yeah, the state that makes bourbon. The Maker’s Mark bar is really cool in that they hype up and showcase bourbons from the whole state, not just their own. The Louisville Slugger factory is a must, too.

Side note: There’s a New Orleans style place in Manchester that’s by far, my favorite restaurant (non-bar category) that we’ve found up here. So I agree with the cuisine comment. Plus, who doesn’t like some old-fashioned New Orleans-style jazz?

I typically am not a huge fan of Kentucky, but their bourbon will always give them a pass in my book.

Louisville: bourbon and baseball bats. The story writes itself. What’s not to like?

It was really weird being in Korea. They all thought we ate junk food all the time (pizza, hamburgers, hot dogs) that we all loved George HW Bush (that was really hard to swallow) and that American women were a little…uh, loose with their morals?

On the other hand, my cousin in Sweden just posted on Facebook that he got a really judgey stare from a lady this morning while walking to the train and he had no idea whether it was due to saying good morning to her or from picking up some litter off the street. And he once read in a book about Swedes that “if you say hello to a stranger, they will either think you are insane or an American.”

He defiantly said he will NOT stop saying hello to strangers, which I found kinda funny.

I also once told some Australian friends that I thought Americans overseas (at least the tourists) were like Golden Labs (overly friendly, really wanting to be liked, kinda goofy) and they thought it was a good analogy.

I’m kinda rambling here but it just is something to consider when you live overseas or in a region how much of an unintentional ambassador you are for that region or country and you have to work hard to challenge the stereotypes people have of your country.

HAHAHA that is great, i have a coworker that is in his mid 40’s and has spent much time in Korea for work and all he ever gets is “WHY YOU NO MARRY YET?!? YOU GAY?

An adult student of mine constantly asked me why I wasn’t married (I was like 26 or 27 at the time) and then one day we were all out for coffee or something and he caught me smiling at a toddler and he asked me a new question: “Do you like babies?” and I said “Yes,” not wanting to be iffy about it and then he said “Well, then you should be married!”

Stereotypes are annoying. I’ve finally just learned to ignore them. Or ignore sites that perpetuate them. That’s why I basically stopped reading certain New York based sites, for example.

We all have that one hill we will stand and die on, I suppose. I support you, though.

The South is also responsible for inventing one of the greatest machines of all time: the Ditch Witch.

Take a backhoe, remove the backhoe arm, and replace it with a giant fucking chainsaw. Beautiful.

I would have thought this a Texas inventions. Something about everything’s bigger there?

Invented in Oklahoma, which is part of the South (as is Texas).

Fair-ish. I usually lump Texas into the Southwest which is pretty distinctively different from the South, in my opinion.

Texas is huge. Its the South. Its the southwest. Its the Great Plains.

Hell, El Paso is farther from Dallas than is from LA

It’s true. El Paso is really in the middle of nowhere.

These suckers is German