First Period
The 1st started off with a conga line to the penalty box with Marchand going off for elbowing at 0:38 then Colborne at 1:14. No harm, no foul, no goals. Game has a nasty sort of feel to it with lots of pushing and shoving after every whistle. Gonna be a good one! At 7:05 Krug fed Ferraro a perfect pass into the slot for Ferraro’s 5th goal of the year (Krug and Connolly with the assists).

Nothing more doing in the period other than a Kevan Miller holding penalty at 13:41 until the dreaded vulnerable minute. To which Rask said “Nah Bro I got this” and made a huge save.

Second Period
Again the period starts off with a penalty with Beleskey taking a two minute minor for usual penalty of “unsportsmanlike conduct”. What gives with that penalty lately? Rask with a huge save on the PK

Nice save by Tuukka to keep Calgary off the board pic.twitter.com/zZUisky4AD

The conga line kicks back up again with Hathaway taking a tripping penalty at 8:41 then noted goon Matt Beleskey taking his 2nd penalty of the night at 9:53 for goaltender interference. (Officials have it out for Beleskey tonight. Claude Julien was furious with the call) Still no scoring, however a pretty good scrum broke out at 15:44 from Bergeron taking exception to an attempted hit by Hathaway that could have been a kneeing penalty. Boston got it’s 3rd power play opportunity of the game thanks to a Frolik trip at 17:31, and that wrapped up the second period.

Third Period
No first two minute penalties to start the period, however Calgary gets the equalizer with Nakladal’s first career goal

Jakub Nakladal scores his first career NHL goal and ties it up pic.twitter.com/l9Zz9NRW7D

It was a boring period for most of it, Frolik didn’t want Beleskey to feel bad for having 4 penalty minutes so he took a boarding call against Seidenberg. Bruins power play kicked into gear a little bit, getting some good chances. If only they’d take another penalty. The B’s didn’t have to wait too long as the Flames took a “Too much man” penalty at 15:53. Bruins really needed a power play goal to take the lead in this game and St. Patrice delivered his 24th of the year.

Is there anything he can’t do? Seriously, if you put him in goalie pads I bet he’d win a Vezina. A flurry of Flames chances with the net empty and that’s it for tonight! Bruins win 2-1 and move back into 3rd place in the Atlantic. 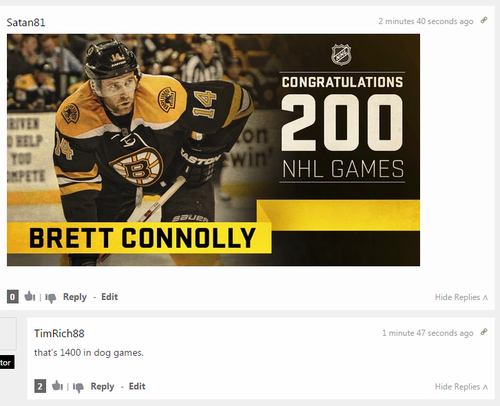 Next on the schedule is a visit from the Chicago Blackhawks.