So here we are, barely a week after the trade deadline and John Michael Liles’ former team is here for a visit! Bruins have had a pretty impressive run, albeit with some ugly wins of late- but finally we’re playing a weak opponent.

You know what that means!

…game.
Right you are Admiral Ackbar, right you are. Luckily we have General Calrissian manning the 4th line to help out!

Bruins are coming off a killer goaltending duel in Tampa in which they won 1-0 in OT, and the Canes beat the sad, pathetic Sens (seriously guys, maybe give your most gifted goal scorer minutes that don’t involve Chris Neil, mmkay? 4-3 in the shootout, coming off of Jeff Skinner’s buzzer beater with 10 seconds left in regulation to tie the game (the second time he’s done that this season, which is nut. Bruins: how about we don’t let this happen, mmkay?)

Okay, some lines for alls y’alls:

Nothing to report here, can’t be messing with a good thing

Nice to see Kevlar skating, he looked none to happy after that Ovechkin hit, but looks like Kevlar and Trotman will be working with Randall to feed Neely Nachos.

And the the Birthday Sparkly BAMF looks to be in net.

Tuukka Rask the first goalie off the ice at morning skate. #NHLBruins

That forward lineup ain’t too great and super-awesome happy fun time defenseman Justin Faulk is out of the lineup. On the surface, I like the look of this. 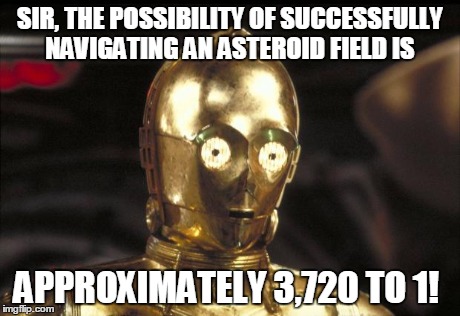 But ignore Admiral Ackbar at your own risk kids!

Come one, Come all to that Period that comes after the first and before the third!

i dont like having more than one Rask on thr ice!!!

The only good Rask is a BRUINS Rask

Bergy is on a crime spree!

Bergy, it’s never a good idea for you to take a penalty.

hey, if it’s only gonna cost him 2 minutes to hook me i’m gonna let it happen

Are you such a big fan of hookers?

hey all, just got in to watch game.

Hopefully you bring better luck than I did!

they seem to be playing with good energy.

My heart is now in a puddle on the floor. This puppy is way too cute.

i feel that way about all puppies?

All puppies are adorable. But there’s something about this one where I want to hug him and want him to be cute and little forever.

Ron Hainsey’s name must drive his teammates crazy, seeing as its already a hockey nickname

and joke’s on me, I now have Eddie Money stuck in my head

That was a junk goal.

We’re officially giving up on the house. It’s honestly a huge relief.

Good for you guys. I’m sorry it came down to that though. I bet you’ll find a place that you just love though

Honestly, we’re seeing better houses come up anyways. Sure, there’s no guarantees, but we can do better now anyways.

You learned a lot from this one that will no doubt help next time around.

Sorry it didn’t work out but glad it’s a relief. Stupid dumb big adult purchases. No doubt you two will find the house that’s right for you.

This made me laugh. We’re at the run phase.

He needs to go for a fighting major:

Bergeron now one PIM short of his career high. #BadassBergeron