Game Recap: Leaf Your Troubles Far Behind You

After a five-game losing streak, the Bruins managed to put together a win against the lowly Leafs. Although this normally would not  be called a quality win, every win now in the remainder of the season is what we like to call a “Super Duper Important Win™”. What the Leafs don’t have in playoff hopes they make up for in youth and speed.

Bruins spend a lot of time in their own zone fending off the Leafs spirited shot taking. Matt Beleskey takes an Unsportsmanlike Conduct Penalty at 6:39 for snowing Jonathan Bernier, which does not change the course of the game since the Bruins successfully kill the penalty.

Later in the period, it looks a little more perilous. Brooks Laich takes the puck away in the neutral zone, creating a tense situation in front of the Bruins goal with a swarm of blue uniforms. Minutes later at 16:55, Ben Smith, scores with a redirect in front of the net on a shot from Colin Greening.

The goal was credited to Greening, later changed by officials during the first intermission.

At 2:39, Maple Leafs Defenseman Connor Carrick is called for tripping on Bruins Winger Loui Eriksson. Thirteen seconds later, the most Perfect of Power Play Goals occurs when St Patrice lobs the puck on net with Beleskey jamming in front. Bergeron is on the cusp of another 30 goal season. 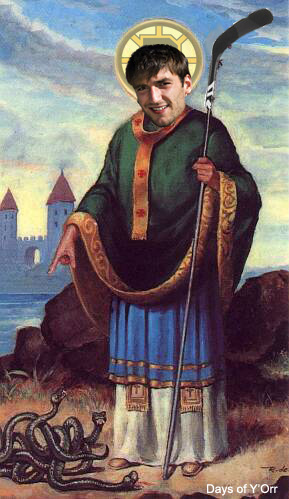 It’s time for the newest in a long line of buddy films in the tradition of Lethal Weapon and Tango & Cash…a Swedish wunderkind and a Czech legend in the making …introducing William Nylander as “Hook” and David Pastrnak as “Dive”. 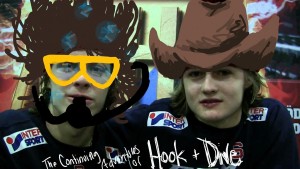 Two young men outside of the law on the ice and off, brought together by a frigid sport that takes no prisoners, that can be both of glory and shame…

Yep, simultaneous penalties on the besties, for Hooking and Embellishment respectively at 4:55. They would go talk it out or feel shame, each in their own box.

Despite the fact that both teams were down a man on the ice, Bruins Captain Zdeno Chara managed to score his first goal in 21 games on a backhand shot to give the Bruins the lead at 6:29.

The team looks energized by the goal. It is amazing.

To round out the period: Noel Acciari gets Brooks Laich’s stick in his face (#B2BAfterDark) and goes down (#MoreB2BAfterDark). Adam McQuaid goes to the box for holding and the Leafs Power Play is still useless. McQuaid and Nazem Kadri have some words for each other. I’m going to guess that they weren’t trading blueberry scone recipes. My actual notes on this exchange:

Frank Vatrano makes a big hit near the bench on Morgan Rielly (pictured above and below).

The Leafs continue to swarm around Tuukka Rask, who manages to make saves. Krejci blocks a shot and looks hurt, but returns for his next shift. Beleskey blocks a shot out of play. At 18:23, PA Parenteau hooks Lee Stempniak. Bruins go on the Power Play, Toronto goes Empty Net and Matt Beleskey nets one at 19:10. Also at 19:0, a fracas breaks out after Kadri had taken a couple of cheap shots at Loui Eriksson, who was down on the ice. Kevan Miller and Morgan Rielly start to fight, Kadri is called for Cross Checking and is tossed from the game. Essentially, Miller, Rielly, and Kadri are all done for the night.

JERKFACE OF THE GAME

Nazem Kadri. He’s a diving :poop:. Please enjoy these gifs of him getting knocked down:

Kadri is such a shit head. He’d be a perfect fit in Montreal. Missed all but the last 5 minutes of the 3rd period last night. Glad we got the win (also glad pittsburg thumped detroit)