Did I ever tell you that I had a Rottweiler once? She was a gorgeous gal, that Amber. So much her own dog, she loved her people, but she was fine to walk herself on her own. Many people have no idea just how funny and smart these dogs are. Amber had a Rottie friend, Thor, who lived down the street from her, and they would often make up games to play with each other like “Around Around Around, Through the Car” and “I Got the Stick”. The look that the above dog has is a look I have seen often especially when told she had to go home, like she had no idea what that meant.

So, why am I talking about my beloved, long deceased dog? Because I’d rather talk about dead dogs than the Bruins right now. They are doing themselves no favours with their play of late.

While they are 5 playoff spots open in the Eastern Conference, each day and each game played closes the door a little more for the Bruins. Simply put, they need to win these last few games. The Red Wings have 1 point and no games in hand on the Bruins. The Flyers also have 1 point plus 1 game on the Bruins for the second Wild Card slot. Interestingly enough, the next game for each of these teams is on Wednesday in Detroit.

The Bruins will wrap up the regular season with a three-game homestand, the first of which will be against the Hurricanes on Tuesday. Every win is Super Duper Important™ but the game against Detroit on Thursday might be the most important game of the week, the season even, for the Bruins. Let’s hope that the Wings play poorly on the second game of a back-to-back. Better yet, let’s root for Team Meteor on Tuesday.

Aw, thank you! I retweeted it and posted a link on my FB page but felt kinda awkward telling you big dumb jerks to comment on it, already!

Chris Kelly and Dennis Seidenberg on the ice for practice. Brett Connolly and Kevan Miller not on the ice. #NHLBruins

Not to dampen your excitement but I think he’s been practicing for at least a couple weeks now. Skating at least. 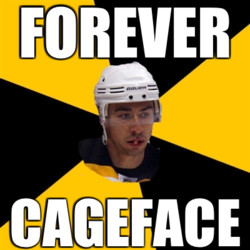 All I’m saying is the news is better than he thought.

All of this is pretty awesome stuff.

“Bad news, cannot send through the mail”
Well not legally.

What if there is a nasty, mean, old troll who guards the portal between our respective post offices and the toll is illegal packages of beer?

Also, I hear that both FedEx and UPS regularly pull packages that they suspect are beer and “damage” them.

We’re not too far away, we’ll figure something out.

Oh darn, do I have to come down at some point and collect OK beer and have German dinner with more OK beer?

Well, there’s that. Or we could come to you. We have transportation.

(one day we should bring VA to Cafe Polonia for beautiful Polska goodness… or you could come down to Polish Fest on May 1st! AHH!)

I would like to point out at this time, that I am a crazy clever engineer with a well-appointed workshop.
I forsee a heavily overpowered t-shirt cannon as a delivery system in our future.

Or I could just drink some beer.

Drink beer THEN make the t-shirt cannon. This won’t end badly at all.

I did okay with some wine. Packaged the hell out of it and labeled it vinegar. I used the post office, I think.

Now I’m curious… what kind of beer and what did it do!?

Very very red and hot but not itchy, well, not itchier than I could tell. Unsettling. Too bad, because I like Susanna Hoffski and her goat, the one that her milkshake brought to the yard.

It is pretty OK with me!
(poor VA)

I had SO MUCH fun on Saturday.
You guys are a bunch of weirdos.

You guys are a bunch of weirdos.

I hope this works from my phone. Me and The Mighty (Silly) Thor before I returned to Boston after visiting my family.

Now that I can see the picture… Thor is adorable. I want to roll on the floor with him.

I had a dog when I was in high school who was named Thor. He was a big galoot. Ironically hated thunderstorms and would try to squeeze his 50+ pound body under a bed every time they happened. Loved kids on bicycles. If he wanted to stay out on a walk and realized you were heading him home he would just find a spot in a neighbor’s yard and lie down. Go on strike. This 50+ pound baby also caused my brother to wreck his car because whenever you drove with him, Thor decided he needed to be in your lap. While driving.

He was such a sweet boy. He was a German Shepherd-Lab mix (I think) and just kind of a goofball. My brother brought him home when he was just a puppy and I remember saying to my brother as he walked in “Matt, dogs are a really big responsibili-OH LOOK AT THE PUPPY!❤!❤!” He had these huge feet and one ear up and one ear down.

He ended up being my dad’s dog and moved with him ages ago to the South. My dad would always complain about him but he loved him too. I think he finally passed away in 2007. He lived a really good, loved life.

I love that you felt it necessary to defend yourself.

Hands up, who thought phony didn’t read it!

Just throwing it out there. I’ve been all over the place lately and haven’t had the attention span for paragraphs, hahaha!

Also frustrating, nay, infuriating was The Walking Dead season finale. I’ve never been angry at a TV show before, but the “cliffhanger” actually made me scream at the TV.

On tap: Friar Odoric and a carafe full of coffee.

Never got into that show, mostly because of the blood.

And a zombie outbreak would last a month at the most. Dead flesh rots.

It’s about the characters for me, really. And the dynamics of the human part of the world.

The show got me into the comics and then I walked away from the show. Mostly because of how they butchered (not literally) Andrea, who is one of the best characters in the comics, by turning her into Basic Bitch

Agreed. I just got caught up with the comics, and Andrea is fucking great. Basically what Mishone has become in the show.

I’ve stuck with the show because I want to see what changes to the story they decide on. That, and to see it in full color and live action is kinda neat.

My overall problem with the zombie genre is that in nearly every book, comic, movie, videogame, tv show set in that genre, the characters have no previous knowledge of what a zombie is. This despite a mountain of stories about zombies in mainstream culture since Night of the Living Dead came out in 1968.

With what today’s mainstream culture knows about zombies, an outbreak would last an afternoon at most. “Eeek! Zombies! Call the cops!” The cops then proceed to shoot the handful of existing zombies in the head. Roll credits.

My problem is that they never show the downfall of society. We’ve explored the post-apocalyptic worlds 1000 times over, and barely get flashbacks of the world falling apart. Never mind a full story.

Fear The Walking Dead is doing that exact thing. I don’t find it particularly compelling.

I fell so far behind in that show back in the 3rd or 4th season that I just gave up. I just don’t like watching TV much, I’ve learned. I literally have no shows that I am following right now and that’s fine by me.

I just love stories, in whatever medium, and I get sucked in way too easily.

Didn’t watch the finale last night because Satan81 and I were (quite amusingly) watching wrassling. Checked Twitter this morning (spoilers don’t bother me) and whoa people are maaaaaaaaaaaaaaaaad.

Twitter this morning was thoroughly disgruntled about several television events last night that didn’t matter much to me. I suppose it was an improvement over it being angry about hockey or whatever rageahol they’ve imbibed on any given day, but eh.

And they should be mad! I don’t buy the producer’s explanation one fucking bit. I actually turned off Talking Dead before the “In Memoriam” bit. I just couldn’t be a part of it any more.

* My brother turned 22 Sunday. We had a good day playing wiffle ball and putt putt with our girlfriends. For some reason we watched all of the Bruins game too.
* Will this job make up it’s mind and hire me or not?
* My girlfriend began applying to post docs Saturday.
* My friends from Charlotte visited Saturday night and we played Settlers of Catan all night long.
* I haven’t played bass guitar in a week! NOT GOOD!
* My friend’s girl loves the Carolina Hurricanes and her name is Carolina. Ends up I’ve accidentally tweeted her a few times.

*Nice
*Seriously, this is the dumb
*Best of luck for her. I just couldn’t even bring myself to consider that route
*Woo Catan
*GASP!
*lol

I always stock pile bricks so I can scream “Nick’s Bricks!” when someone trades with me.

Carolina needs to change her last name to “Hurricanes”!

I hope the job people make up their minds soon. The wondering sucks.

Ever since last night’s Wrestlemania, when I hear the churchbells ringing in town, I keep expecting to hear The Undertaker’s music.

I’ve had Sasha Bank’s theme stuck in my head all morning.
“Had a dream I hadn’t made it
There’s nothing dragging down me now
Cause a girl gonna push it all out the waaaaaaaaaaaaaaaaay yay yay.”

What made that game even weirder is that it was 11:30 in Chicago.

Being yelled at for talking?! Are people trying to get naps in over there or something?

My Outlook won’t open today. I have to use it on my phone.