The Case for Retaining Claude Julien

If the coach should be fired due to the team’s lack of success, did the team actually lack success, and was the coach a primary contributor to that failure?

Certainly the Bruins did not qualify for the post-season, and that was considered an imperative for the 2015-16 season. Last season, in a similar situation, CEO Charlie Jacobs stated that “for us to be a team that’s out of the playoffs is absolutely unacceptable”, and there is little reason to think that attitude has changed. Team President Cam Neely has approached this season as a playoff season, as demonstrated by the trade deadline strategy to keep Loui Eriksson even though he would become a UFA rather than get less than percieved value.

Well, why did the team fail to make the playoffs? (Uuuhhhh, they didn’t win enough games?

Thanks captain obvious)
Last season, a weakness of the team was a failure to score goals. They were 23rd in the league at 213 GF, and Neely publicly complained that you can’t win a game 0-0. So how was their offense this season?
They were 5th in the league for scoring, at 240 GF. That is roughly an additional 1/3 goal per game over last season. Neely asked, the Bruins delivered.

Goaltending wasn’t perhaps quite as sharp this year as last — last season the Bruins were 5th in the league in SV% at .918, while this season, they were dead average. Not anywhere close to the league leading .928 of 2013-14, but respectable. Certainly dead center in the range one would expect of a bubble team. 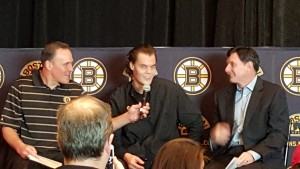 Tuukka Rask talks with Goucher & Beers at Cuts for a Cause fundraiser.

Is that where they fell short? Well they fell short in one other area. Team defense.
In 2015-16, the Boston Bruins were 12th of the 16 Eastern teams in GA (20th of 30 league-wide). No teams in the 2016 playoffs allowed more than 230 goals (and the one who did allow 230 goals led the league in scoring with 267). They were 19th in the league in shots against, ~50 SA worse than average. And anyone who watched the games would conclude that they were less effective at keeping shooters to the perimeter.

Then what changed defensively?
No Johnny Boychuk, an older slower Zdeno Chara, Dougie Hamilton replaced on the roster by Colin Miller with Kevan Miller taking 1st pairing duties. Defensive-minded center Chris Kelly was injured and replaced by the more defensively dubious Ryan Spooner. Dennis Seidenberg never returned to his 2013-14 performance levels after an MCL injury. And we will not speak of the Matt Irwin experiment.

If you were an NHL GM, how many of the defensemen on this team would you consider appropriate to be in the top 4 roster spots on your team? Chara (perhaps no longer an elite #1D, but easily top-4). You might try Krug (barely)? You could trust McQuaid or Miller or Seids to fill in on a short term basis, but if you are being honest, you wouldn’t voluntarily start any of them there.

I think it is fair to say that if one is given a bottom-10 defensive roster, that expecting a playoff appearance is just not reasonable. So what was asked of Claude was clearly a stretch. One does not generally fire employees for missing a stretch goal.

However, we’re talking about the NHL. In a league in which this sort of employer behavior is expected, a team may be expected to upgrade a coach if a better coach is acheivable. Justifications are given such as “We need a change”, “He’ll do better with a change in scenery”. Has Claude under performed? Has he hit a plateau? Well, he did get the Bruins to two Stanley cup finals, bringing home the Stanley and a President’s Cup in the past 6 seasons. So in spite of 2 playoff DNQs, he’s not exactly Marty Schottenheimer or Marv Lewis. He’s had success, and fairly recently. He is obviously one of the best coaches in the league and has shown the ability to bring home the bacon.

Another likely justification to move on: “We’re going in a different direction with the team” — Are you? It sure as hell looks like Bergeron/Krejci/Chara/Rask is still your core. You replaced Milan Lucic with a fairly similar Matt Beleskey, kept Brad Marchand, kept Loui Eriksson… What we saw was a team that got younger, and perhaps a little faster on the bottom-6 and the blue line. Claude integrated Pastrnak & Spooner, made them develop their defensive skills, and jumped on Ferraro & Acciari. I don’t expect to see the Bruins take this approach with Coach Julien. Julien seems to have gotten a substantially similar team forward makeup as he’s gotten in the past, and has actually been fairly successful at integrating the younger players he had the opportunity to.

“Nobody gets to coach the same team forever” – this argument is completely asinine. Bill Belicheck is going into his 16th season coaching the Patriots, and no one is seriously thinking he should be moved. Red Auerbach lasted 16 years as a coach and 30+ as GM of the Celtics. You coach as long as you are the best option for the team. Which brings up a point – is Claude still the best option for this team? After all, you’ll need to repace him with someone. Well, who would be a better option?

My question is this. If Claude did so fantastic this year, what were the expectations for this year? Being like a bottom 5 team with the Buffaloes of the league? Being a legit contender?

I’m not in the fire Claude camp, but, this team finished about exactly at their ceiling. Claude is not an irreplaceable coach.

He may not be irreplaceable but he also is not easily replaceable. He’s the best coach this franchise has had in decades and one of the better ones in the league.

Coming into the season, I don’t think most people thought we’d eve come close to making the playoffs. I’d say the team was better than expected. Not good, but not the complete and utter steaming pile of trash we thought it’d be.

I don’t think he should be fired, but at the same time, I couldn’t really fault them for doing so.
I really hope they wait to see if a worthwhile replacement opens up first, though, as I’d rather not take a coach who isn’t ideal as a temporary solution just so we can fire him halfway through the year. it’s not good for the young guys to not have stability, IMO.

That’s where I’m at. He’s one of the best coaches in the league and I have a really hard time giving that up, even if some of this season’s failings are on him. I also don’t buy into the narrative that he’s driving top young talent away, given the giant stack of empirical evidence to the contrary. If management decides that he really has to go, then it had better by Hitchcock who replaces him. He has the Cup-winning pedigree, his style fits the Bruins, and he has an innovative/creative mind for the game.

Each time my phone buzzes with sports updates I fear that it will be a Breaking news: Julien fired by Bruins and then I read something like this and I hope that smarts outweighs emotion.

Yep. I’m nervous they’re gonna can him, but I really hope they don’t.

I’ve resigned myself to be pleasantly surprised if he stays.

Torts isn’t available (Columbus), but I agree with the piss poor quality of the readily visible alternatives right now

Oh geez, right. He was still stuck in my head from the last round of “Fire Clode, the musical”. His appearing on TV early in the season didn’t help. Oddly enough, he seemed really really nice on TV. I think I’ll yank that line out of the article.

I like to think that I would have caught that given another read-through, but since folks are talking about Sweeneely acting *today*, I figured that it would have to be good enough as is and needed to get published this morning.