Three First Round Series ended today. Good bye to the Flyers, Wild, and FancyCats. Perhaps that llast one is the one that hurts the most.

Claude Giroux was held to two shots on goal in game 6. Two shots. Philly went 0-for-2 on the power play.

Both teams brought the same effort at even strength through the game (and the series, really). The Flyers’ penalty kill improved exponentially as the series went on, but it wasn’t enough. They couldn’t capitalize on their power play opportunities, nor could they put enough pressure on to get the puck past Holtby during 5-on-5.

In the second period, Marcus Johansson had the puck in the slot, fed it to Backstrom at the bottom of the left circle. Backstrom flung it past Neuvirth, who apparently was actually human for a second. Who knew?

The Flyers brought their A-game in the third period, but Holtby held it together. They put a ton of pressure on in the last couple minutes, to no avail. Also, Karl Alzner flattened Jakub Voracek.

Holtby denies Gostisbehere. He ain’t afraid of no ghosts.

Capitals win 1-0, and win the series 4 games to 2. They will now advance to the second round to face the Penguins. Holtby made 26 saves and is tied with Olaf Kolzig for most playoff wins for the Caps, ever. The Flyers scored four goals in the three games Neuvirth started, and one was on an empty net. Their powerplay went 1 for 24 in those three games.

The Minnesota Wild honored Prince inside the Xcel Energy Center. (Via @mnwild) pic.twitter.com/nXmihRxfJu

Minnesota continues to honour Prince both in the stands and just prior to the game with a Moment of Silence in a packed, purple-bathed arena.

Kari Lehtonen is the starter for Dallas after having the past two games off when Antti Niemi showed how unreliable he could be. Truthfully, this Finnish tandem is very flukey.

Shortly after the game begins, Dallas shows that it has terrible counting skills, getting a bench penalty for Too Much Man. 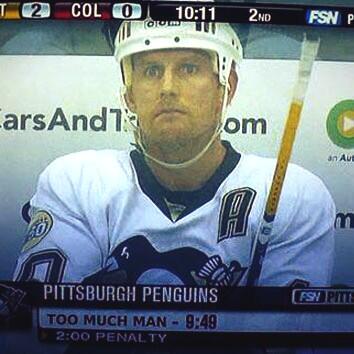 The animosity between the two teams starts up when Wild Centerman Charlie Coyle is called for Elbowing Jason Demers at 4:16. To add (potential) injury to insult, Marco Scandella High-Sticks Patrick Sharp, who was looking for blood on his own face, at 4:51. It is now 5-on-3 for the next 1:25, or is it?

No. At 5:56, John Klingberg scores his first-ever playoff goal, a Power Play Goal at that.

The Stars remain on the Power Play time for 55 seconds due to Scandella penalty.

Jason Spezza adds another goal at 9:07 with a backhand into the net.

Jason Spezza doubles down on the Stars early lead pic.twitter.com/G4qWNgdJ4p

Sharp snaps one in at 18:11. After this goal, the officials checked the net and the camera since there seemed to be some sort of problem. I guess Patrick’s snap shot was a little too sharp.

Though it may not be the best idea at this point, Devan Dubnyk stays in the game. He will have to get it together after letting in 3 goals on 13 shots.

The Wild has their first Power Play of the game when Vernon Fiddler is thrown in the box for Tripping Mikael Granlund. Pierre is saying something about the best way to get your crowd to be against you is to look lost, hopeless, to do nothing on the power play. Yep, that sounds about right. The audience is pretty quiet and you can hear the players yelling to each other on the ice.

Almost 14 minutes in, each team only has an additional 2 shots on goal this period. This has been the Most Boring Period Ever! It doesn’t get much more exciting even when Jamie Benn scores his 4th goal of this series at 19:36. Yawn.

Dallas leads 4-0 going into the Third. Why couldn’t you do this a couple of games back, Dallas?

At 8:22 Stephen Johns is called for High-Sticking on Jason Zucker. Spurgeon, feeling like he has to lead the comeback all by himself

Almost two minutes later, a funny faceoff bounce goes over Dubnyk and Coyle pushes it in for an own goal. Dallas 5-3.

Alex Goligoski would get credit for the goal because Charlie Coyle cannot be credited for it for obvious reasons.

Krispy Kremes go empty net with about 2 minutes left in the game, down by two goals. Dallas takes a weak icing call at 0:52, and again off the next faceoff at 0:46.

Lehtonen has a sloppy stop and Jason Demers tries to help, possibly closing his hand on the puck, nearly pushing it in. The puck is “millimeters from being in” on the overhead. Review: NO GOAL

THIS CLOSE TO TYING IT pic.twitter.com/GWEk3oyIAe

Stars barely outlast the Wild. Mike Milbury during the second intermission claimed that the Stars were ready to play playoff hockey. No, they’re not.

Not much happened. Jaromir Jagr Hooked Kyle Okposo, but nothing resulted from this.

Cal Clutterbuck was < a href=”http://uproxx.com/sports/cal-clutterbuck-puck-to-the-face/”>kissed by a biscuit, losing much blood and presumably teeth, when Logan Shaw tried to backhand pass the puck to Jiri Hudler.

With 1:02 left in the period, Jonathan Huberdeau sends a snap shot on Thomas Greiss.

Another look at Huberdeau’s goal pic.twitter.com/gjk9GdiXKq

Clutterbuck is back on the bench. He’s a tough SOB.

Late in the second, the FancyCats have a great scoring chance. The puck is bobbled by Greiss, Calvin deHaan, and old friend Johnny Boychuk before it’s finally stopped.

The teams would play 4-on-4 for most of the last three minutes due to minor penalties assessed to each club seconds apart. This is what happens:

Thomas Hickey upended Reilly Smith and was sent to the box for Interference at 9:11. The Islanders Penalty Kill is stout. As the penalty expires, John Tavares rushes up the boards with the puck on his stick, waits for backup and sends the puck to them to shoot on goal. Roberto Luongo ends up like a snowangel on the ice. Nothing got by him.

Huberdeau Cross-Checks Hickey at 12:37 and aside for a couple of shots and a poorly done short-handed attempt, not much happens. A flurry of activity on each end occurs.

The Islanders do not want to die here. They tie up the game at 19:16 with their own net empty when an unseen Tavares tucks it in the goal. But, should it really count? Deep in the Islanders zone, with the net empty, a Tripping of Vincent Trocheck goes uncalled on Matt Martin.

“Excuse me while I just tie this game up…” pic.twitter.com/SIvJsy2uGC

I keep calling to the higher powers, the Hockey Gods™, the Noble Spirits if you will, for this to end quickly.

All I want to do is go to bed like any normal person.

Jagr is in pain, looks like it was a slap shot to his knee from Aaron Ekblad. He gets some attention, will return.

The Isles advance on John Tavares’ second goal of the evening, a wraparound goal from a rebound off his own shot.

John Tavares wins it in OT and the Islanders advance pic.twitter.com/TkdBLPcycP

One double overtime is pretty cool. For me, that was 3 double overtimes in 3 consecutive nights, when I had something else I needed to do. By the time this Panthers/Isles one happened, I just wanted it over.

Yeah, spending 5 hours at the old PCC, with concessions closed at the normal time, was a bit too much.