Who will win in the 2nd round? The hockey spirits know – but will they tell us their secrets?


the german hammer
(1)Dallas Stars vs (2)St. Louis Blues : I don’t believe in either of these teams. To me they could be locked in a terribly long, dragged out tie that will cause these playoffs to go on forever. So I used the ultra-scientific method of random selection of picking teams and numbers out of a hat. 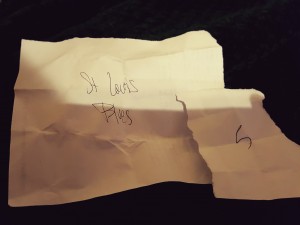 (3)San Jose Sharks vs (WC1)Nashville Predators: Nashville has the ability to ride out a series but they have to make sure they don’t take games off. Pekka Rinne WAS ON the past two games; he needs to make sure the ON switch is stuck in that position. San Jose just dominated that series against the Kings. Nashville won the regular season series 2-1. Can they hold on against the hot Sharks? Yes, yes they can. Predators in 7.

Miss Muse
(1)Dallas Stars vs (2)St. Louis Blues : I still think Tyler Seguin is kinda gross and I am in love with the Twitter account of the guy who just discovered playoff hockey by watching Game Seven of the Blues-Hawks series. If there’s any time to get into hockey, that would be the one.

Tony X is a hoot!

dude in the penalty box holding back tears like hes in real life timeout.

wait goalies fight? that must be setup pregame….. how can u have beef with dude who allllll the way on the other side?

The Blues have to do well just so Tony X can keep tweeting out more gems.

In the regular season, the Blues ran over the Stars quite handily, potting 13 goals to the Stars 10. I don’t have too much of an opinion of either team, but since I like Tony X’s spirit, I am gonna say Blues in 6.

The team I hate because they defeated my second favorite team is up against the team that I love for defeating the team I hate the second most in all the league.

In other words, San Jose clobbered the Kings and sent them packing, but OH MY GOD THE PREDS BEAT THE DUCKS AT THE PONDA AND ALL IS RIGHT WITH THE WORLD.

I’m a sucker for the underdog. I’m a sucker for Finnish goalies. I want this series to go seven games so I can look at Roman Josi for a long time. Mike Ribeiro can get bent like a pretzel.

The Predators and Sharks met three times this year, with Nashville taking two out of those three games, and outscoring the Sharks 10 goals to 6.

I want the Preds to take the series, if only as a public safety measure. Joe Thornton‘s and Brent Burns‘ beards pose a tripping hazard if they get any longer.

So I will say Preds (please) in six.

Intentionally Weidenberg
(1)Dallas Stars vs (2)St. Louis Blues :
Both these teams are flawed, teetering on the edge of a faceplant at any moment, yet can dump 4 goals on an opponent at times as well. And both were better teams than their adversaries on the last round – no upsets allowed. Dallas is missing top scoring threat Tyler Seguin, and has by far the worst goaltending of all the playoff teams. The Blues are a very inconsistent scoring threat, and have a history of disappointing in the playoffs. However, they did manage to get by the Blackhawks – their nemesis, and a team that keeps a horseshoe up their hockey pants. Even though the Stars are the top seed in the West, the Blues are probably the better team overall. I expect the Blues to win in 7, giving up 4-6 goals per game in each of their losses.

(3)San Jose Sharks vs (WC1)Nashville Predators:
The Preds are a tough matchup for the Sharks, and did win the regular season series. Both teams are fairly healthy and have good goaltending. I’d be prone to picking the Preds due to them riding the emotions of winning more recently and winning the regular season games, but my gut is saying the Sharks will be the more consistent team and will pull out the win. Sharks in 6.

Carvinbass18
(1)Dallas Stars vs (2)St. Louis Blues : The old saying is “defense wins championships” and the Blues defense is much better than the Stars. That will be key to this series. Dallas can score for sure with Jamie Benn (and if he ever returns) Seguin, but just like the Hawks series it’s a battle of skilled offensive players vs skilled defense. Blues in 6.

(3)San Jose Sharks vs (WC1)Nashville Predators: I thought that the Ducks would win the series against the Predators, so now I’m a little bit at a loss on this one. The Predators have a terrific top four with a scary as all hell bottom pairing. San Jose is looking to get past the “We can’t win in the post season” narrative they have going for them, despite boasting some very talented players in Joe Thornton, Brent Burns and Joe Pavelski. Pekka Rinne might be the best goaltender left in the playoffs, so I’m flipping a coin on this one. Preds in 7.

Satan81:
(1)Dallas Stars vs (2)St. Louis Blues: The Blues struggled against the defending champion Blackhawks. The Stars struggled against the Wild. The Stars are built around having an overwhelming offense to make up for substandard defense and goaltending. It’s going to be tough to be overwhelming if Seguin remains out. The Blues, on the other hand, have depth, balance, and talent. Blues in 6.

(3)San Jose Sharks vs (WC1)Nashville Predators: Shea Weber has serious beard game, but the Predleys will wilt before the awesome beardosity of Burns and Thornton. Sharks in 5.

Phonymahoney:
(1)Dallas Stars vs (2)St. Louis Blues:
Blues in six. They’re going to be riding on the high that is beating their super talented Cup dynasty rival. I believe that in the two games Dallas wins, they absolutely trounce St. Louis, but I’m giving the Blues the round on this one.