Last night saw the second game of the Eastern Conference Final. And it went into Overtime, which is exactly what everyone wanted!

And Crosby proved that he’s a sniper!

Yes he is, Sarah Manning!

Anyway, the one thing I have discovered in only peripherally catching this series is that Andrew WK’s “Party Hard” actually sucks so hard as a goal song. I thought it would be better. Maybe it’s because it’s the Penguins that use it that makes it suck.

Yes, Helena, I agree; the Penguins are poor copies!

Oh yeah, I guess I should mention the Sharks and Blues play again tonight.

“Ramp pesto”? Sounds like something scraped off the pavement of a highway exit.

Also, i feel like attention hasnt been brought to the fact that Orphan Black is simply a fantastic show.

I hear that frequently from my friend.

The show is fantastic. Tatiana Maslany is fucking phenomenal.

I still need to catch the third season because my cable company decided to drop BBC America because of course they would drop one of the channels I watched most.

I’ll have to look for it and give it a try. We are heading into the 10th and final season of “New Tricks” (also BBC America and my library).

A couple of afternoon bullet points for ya!

For the record, I now have this image of “Take Me Home, Country Roads” playing on repeat non-stop.

That would be awful. Also, it is awful because it has happened in the past.

But… isn’t Pippi scared shitless of that cat?

Your dog is weird.

she was for a little while, but they bonded over the past couple of months. He still kicks her ass all the time, but Izzy has put the claws away whenever she jumps at him.

But yeah, she is weird

Just picked up “The Best of Doc Watson” at the library – inspired by your post!

They have music at libraries?

So our receptionist is the hub of all human relations here – not like HR, more like, who gets along with who, yadda yadda.

Anyway, she is convinced that my work crush is the right man for me, and she wants us to be married.
“You’re both very intelligent. You have a great sense of humor. He’s a nice Jewish boy… and you love redheads. This is perfect.”

Get her laying the groundwork! WIng(wo)manning and all that shit!

In February someone bought a subscription to the Rolling Stone on my behalf. I don’t know who it was was or why they did it, but I appreciate the gift. The Rolling Stone actually covers a broad range of music and politics. There’s always enough material that I disagree and agree with to keep me reading.

Matt Taibbi is one of the better long-form political writers working right now. So long since I read the print edition, I don’t know if hes only online now or not though

YES!
Greatest thing ever just happened. They scheduled the Quarterly Update Meeting for next week and I’ll be on vacation! WOOOO FUCK YEAH

Doing anything fun for vacation?

And a good morning Recch to you sir

If you take the Putin heads off, damn that looks good and I want to eat it.

I feel mildly offended by this despot-ing of Canada’s gift to the world.

…says the guy who conceived the idea of the Poutini while driving one day. 15 parts gin, 1 part gravy, garnished with a cheese curd lanced on a fry.

I may have conceived the idea. It does not mean that I believe myself or anyone else should ever try it.

In Soviet Russia Poutini curds you.

I thought you were gonna say 15 parts gin, 1 part Putin.

That would be the Putini rather than the Poutini.

He’s Russian, so it’d have to be a vodka Putini.

The choice of facial expression is what really makes the picture work.

Good Morning All! I’m still on a high from the weekend… it’s all natural, really!

I don’t mind the Guins tying the series, because we all want 7 games plus OT, right?

Not much to add except the bourbon to my coffee!

I don’t mind the Guins tying the series, because we all want 7 games plus OT, right?

No I want the season to be over because there has already been too much hockey with no Bruins playing and I’m growing bitter. It’s time for everyone else to stop having fun and get off my lawn lol

Top o’ the morning to ye!

I better go get some things done.

Yes, the new skates are amazing! Glad yesterday was better. Seriously, if you skate well, you don’t need to be fast. Being in control is a better skill. I see lots of fast players that can’t maneuver well. Older, slower players just deke the shit out of them with stops, turns and circles. You don’t even have to be a great stickhandler. As long as you can protect the puck with your body, you’re golden. We need to play some hockey together. We need to get Bagel Bruin in the mix, as well!

Hey, I can Jagrbutt all damn day!

I used to be sneaky-fast. Now, I’m not even sneaky, hahaha. I’ll keep working at it, I think there are 14 public skates between now and the start of the skills clinic. After I finish that (ten weeks), I’m gonna join a league.

And yes, definitely on board for hockey!

Hey, I can Jagrbutt all damn day!

Jagrbutt is the best hockey skill there is!

I’m down for a game!

But can you handle this? 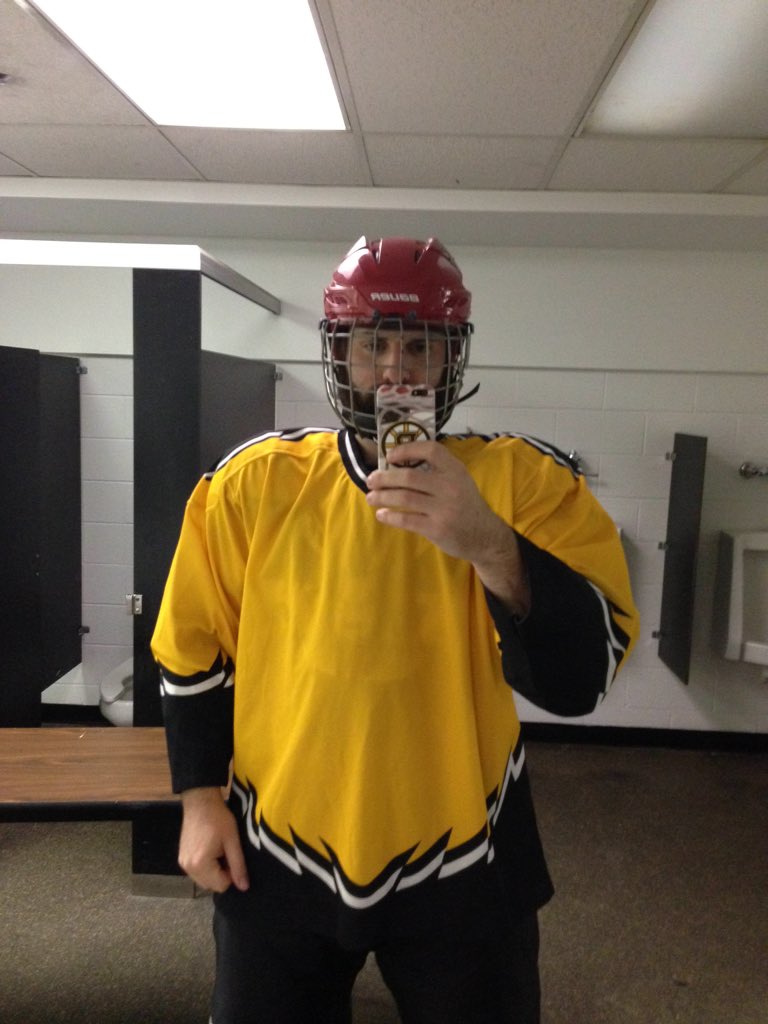 This jersey smelled bad all the time. No matter what I did it always had an odor, so I donated it to goodwill. The sleeves were short as well, so I didn’t wear it often.

It’s an improvement over full-pooh. Now you’ve just got to do something about all that damned yellow!

Good morning, have some bullet points for your reading pleasure this morning

My desire to not have coffee has passed thank god

Oh, good. Thought you were a goner.

It was a weird time. I can only handle mediocre coffee in a plastic mug for so long though and I need something new.

mediocre coffee in a plastic mug

Barf! You need a french press at work. They make them in stainless steel so you could get one that can withstand a work environment. The coffee is fresh. You need a decent mug, as well. Plastic coffee mugs would make me stop drinking coffee. I’d rather have it poured hot right into my hands. Get some unbreakable nonplastic mug. You will then be free to fall in love with coffee again.
PS A little bourbon wouldn’t hurt.

I love coffee and I used to have a metal mug that would keep my coffee hot all morning long here but it got knocked off my kiosk one day and bent so it wouldn’t stand up straight. A french press would be great, but the coffee machine here at work is in the break room in the middle of the building and production is all the way down at the far end of it. We’re not allowed to have food or drink on the floor with coffee mugs and water bottles being the exception.

Funny thing with that is they say it’s for the “oh chemical fumes from acetone and isopropyl could land on your food / drink and be unsafe but everyone’s coffee mugs don’t have close-able lids and they’re okay. Styrofoam cups that have lids & soda bottles that have caps that seal the bottles aren’t okay. Way to think that one through guys

Maybe just a new metal mug then. I can’t drink coffee out of plastic – bourbon or no bourbon.

Barf! You need a french press at work.

Who knew Joe was so classy?

When it comes to coffee (and bourbon) I can rise to the occasion.

Sure come on up!