Yay! We’re one step closer to the official end to the 2015-2016 NHL season with the San Jose Sharks advancing to their first ever Stanley Cup Final. Some of us will care, some of us will not and that’s how it is.

The Sharks may start on the road if the Penguins win tonight. If the Bolts win, San Jose will host it’s first ever SCF game.

The Bruins didn’t make any moves yesterday, did they? I didn’t see anything. Then again, I guess I was too busy keeping cool during the heatwave

and drinking away my disappointment.

The good news is the gang is getting back together and there will be a shiny new Bearly on Topic episode for you to listen to next week. Come on! Admit it- you’ve missed us and you want to hear the emotion and timbre of our voices when we talk about recent Bruins transactions.

Long weekend for me ’cause of a German holiday. Gonna go to Strasbourg, France tomorrow, ’cause it’s only 2 hours away.

Oof. The Hamburg Freezers of the DEL folded:

Watching Blues-Sharks now. Some good shifts by the Blues, but the Sharks dominated this game almost from start to finish.

For those wondering about up coming prospects. Satan81’s got B2B’s #43rd ranked prospect right here!
https://bobbytobergy.com/2016/05/26/b2bs-2016-nhl-entry-draft-preview-pick-43-dennis-cholowski/

Hudson, NH? If so, WHY? This area sucks.

That’s where he lives and has a job. She was able to transfer from the Plymouth Hanaford to there.

Ugh. I currently work in Hudson (and therefore am sitting in the town right now). It’s definitely got a lot of spill-over from Nashua.

Yeah, there was lots of lobbying that he transfers jobs from there to here, but with his family down there and whatnot… Bunch of jerks. All there is to it

By “quality cup of coffee” I assume you mean there’s bourbon in it. Me also mowing. Brush burning next week.

The Bruins think they signed Kevin Millar. Instead they got Kevan Miller. They signed the wrong misplaced A!

they do look similar for miller’s

Time for the Bruins to Cowboy Up! In related Red Sox stuff, this may be my new favorite picture ever: 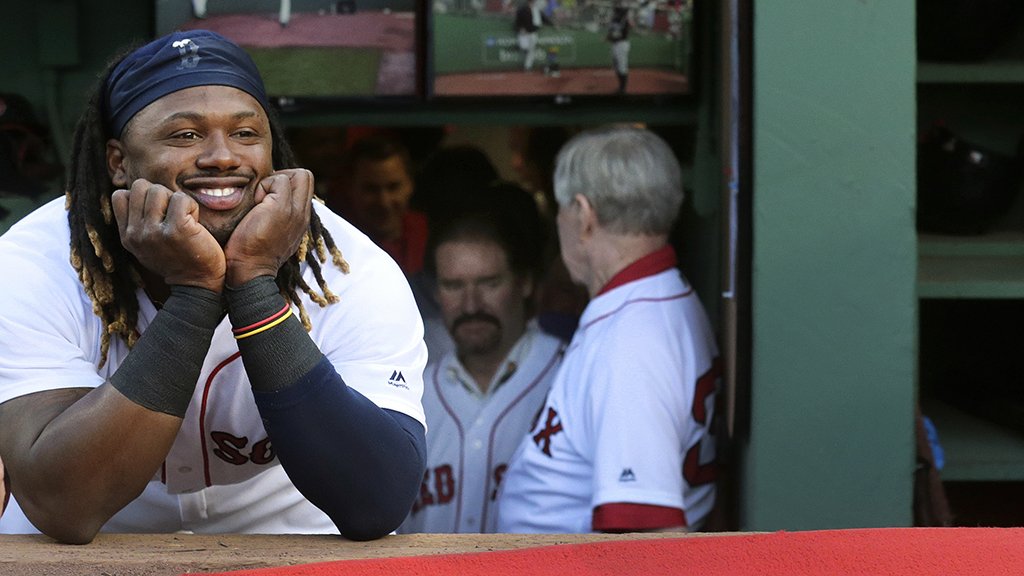 The Bruins think they signed Kevin Millar. Instead they got Kevan Miller.

Weid that you should bring that up. I had just been wondering which Boston-area team would be the next to sign some fucked-up permutation of that name.

Good Morning All!
Fork the Shorks!
More work today. Will it ever end? Yes, tomorrow about noon.
Double last night. Had to work a little first game, nice and smooth in second.
Coffee with ALL the bourbon on tap. Work, work, work!!

Goddamn Sharts! Since the Isles got knocked out, I’ve kinda been rooting for the Blues. Now I guess the Bolts are the least unlikeable team remaining, because fuck California and double-fuck Shitsburg!