The 2016 NHL Awards were last night, and Bruins won no prizes!

We had our own running thread during the ceremony, but here are some highlights of the awards.
The Bruins players who were finalists for awards were Loui Eriksson for the Lady Byng, and Patrice Bergeron for the Selke.

To a fair amount of surprise, Anze Kopitar won both awards. There also seemed to be differing pronunciations of his name between award presenters, and since he wasn’t there to correct them, the confusion would not be corrected.

Kopitar won the Selke by a surprisingly large margin in spite of Bergeron’s higher goals, defensive zone starts, faceoff %, and Corsi-rel. In fact the Kings took 3 of the 4 awards they were in the top 5 in voting for, which makes me wonder if the PHWA inducted 20 new members from LA this season.

Also a surprise, the NHL Foundation Award for charitable & community work went to Mark Giordano. Not to downplay Giordano’s efforts, but I have it on good authority that PK Subban personally saved 40,000 puppies from a burning building and trained them to run a chain of luxury soup kitchens.

However, even if the award voters didn’t completely endorse him, it seems like someone is pretty high on him.

More interest for PK Subban since 48 hours. I count close to 10 teams who have interest in PK. Canadiens are not shopping him 1/2

To no one’s surprise, the Cap’s goaltender won the Vezina

And finally it was mostly unsurprising (if disappointing) to see Patrick Kane win the Hart trophy. 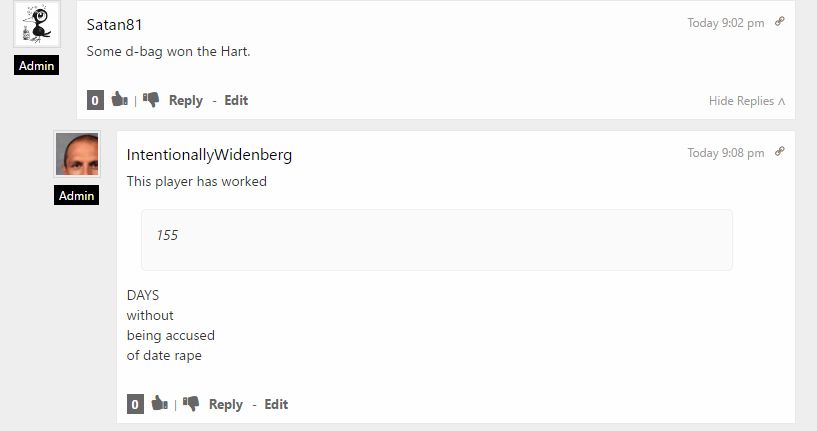 I’ve had a muscle twitch in my cheek all day and I want to chop my head off.

That will fix it, for sure.

Do what im doing….(see above).

Entertain me people…. cause this is how i feel at work today..

They fed us free ice cream today. I got the one loaded with espresso beans. I’m fucking wired. Why is the room shaking?

If you want to feel smart, read that and laugh

But…haggs…makes me feel dumb not smart…its like a vulcan mind meld….

$9.3 mil…..yep…thats all i needed to read….i seriosuly dont think he owns a toilett…i think he shits in a 3D printer and makes the paper to write his ideas on.

And why Jones? he’s not even the best RFA on the market for D

Coach of an 84-point team (Hynes) got a 1st and 3rd place Adams vote. They finished 7th in the Metro!
Jagr and Kopitar got 1st place Harts? Yea, no.
Filip Forsberg and his 72% Ozone start got two 1sts and a bunch more Selke votes?
Mark Stone and his 55% Ozone got a 1st Selke vote?

So glad I got drunk watching grass grow last night instead of watching the awards.

Well uh…. this hasn’t been a fun way to open the day. Replaced 5 more jets which brings my total up to 9 on this unit.

Does the printer even have 9 jets, or have some now been replaced twice?

I wouldn’t be covered in ink & struggling with quality

Somehow, I don’t believe this. Ink and quality would find a way.

So, at Mom’s 96th b’day party she brought up her philosophy. “Life has a way of working itself out.” She knows, oh yes, she knows.

Good Morning All!
Pulling together my zinc counter top job this morning. I hate/ love these jobs. They are intense as the material is expensive, but very satisfying when completed.
Lots of mowing and shit on tap today.
Coffee was pretty good this morning…. even without the special sauce.
Drinking lots of water!!
Getting pumped for Riverfest!!!

Upset Bergy got robbed. As he did when towes won his award. Ironically this was one of the few years in my lifetime I’ve agreed with the Norris selection. The NPWA has no clue what the fuck they’re doing

And stupid Dickweed Queen for not making you a knight?

Make me a fucking knight, dickweeds! Coincidentally, I’ve had Queen stuck in my head all morning.

Wow, you read my mind.

if you like queen..you may find this band interesting: https://www.youtube.com/watch?v=yJnXLOPTx8k

MAKE ME A FUCKING KNIGHT, YOU STUPID DICKWEEDS

Notice has been submitted the timer has started. I QUIT. HOLY SHIT, THIS IS HAPPENING. How much notice did you give them?

Two weeks. Ending July 7th. I’m assuming they’ll want me to start the 11th, so I wanted to at least give myself a long weekend. Plus we run a 9/80 work schedule in the summer and half the company will be out on the 8th anyways.

Awesome. And there’s the 4th of July long weekend so really you only have 8 days left here?

(Plus I’m taking the 1st off for a wedding)

You got any sick days you can use to reduce that number further?

BULLET POINTS BECAUSE I INVENTED THEM AND I CAN:

You with bullets is a given…its automatic even. Yessss! I heart Snagglepuss and totally read it in his voice.

and totally read it in his voice even

fixed it for you.

Remember when people could afford things in Boston and didn’t need roommates?

I told him I’ve had drinks with creepier people
Hey, I resemble that remark! (Curly voice over, please)

Apartment hunting is not going anywhere.
One of the reasons I keep working where I do is because hunting for a new home and moving really suck.

I told him I’ve had drinks with creepier people
Hey, I resemble that remark! (Curly voice over, please)

Hahahaha, I didn’t even think of you, but good point! Hahahah