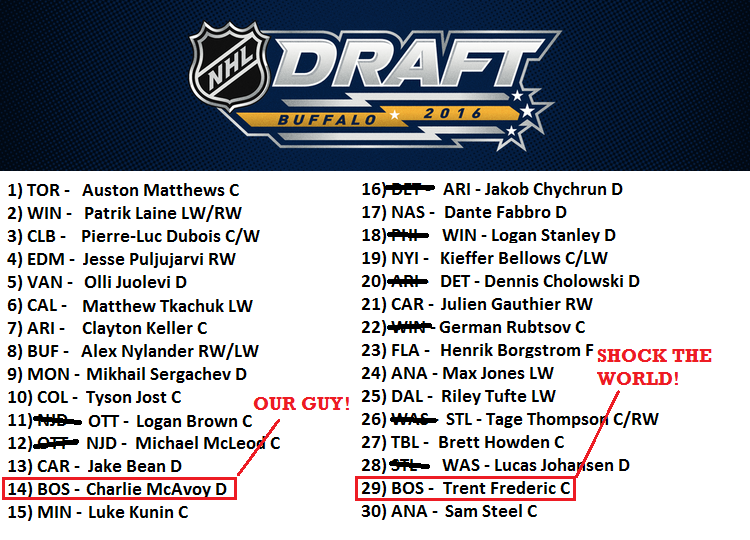 Okay folks, welcome to Day 2 of the 2016 NHL Entry Draft. The picks last night were… interesting? Overall, a lot of players went a bit off their projections, and there weren’t a whole lot of trades. Not like the wheeling and dealing of last year. Bruins made the smart choice and drafted BU defenseman (Right shot!) Charlie McAvoy with the 14th overall pick, but went a little crazy with #29, selecting the USNTDP’s (and U. Wisconsin commit- future teammate of Bruins prospect Cameron Hughes) Trent Frederic (a Centre), in a move that #SHOCKEDTHEWORLD . Naturally, twitter reacted with its accustomed dignity and aplomb. The bigger news was that there was no big trade for a defenseman, and apparently Sweeney was saying that anyone ‘selling’ was asking for both 1sts AND Pastrnak to start off with. So yeah, no thanks.

Anyway, grab yourselves some coffee and lets do rounds 2-7!

Well folks, that wraps up the 2016 NHL draft. No Trades for a defenseman.

No 7th round pick today friends.

Boston takes Oskar Steen. I'm a fan of the highly skilled forward as is the Swedish program as he was one of few 1998 invited to WJC camp.

32 points in 33 games for Farjestad U20, 6 assists in 17 games for the Farjestad big club (also 0 points in 5 playoff games there). Didn’t hit 18 until March 3rd. Nice value late pick by the sounds of him

Saw Koppanen at the U18s- massive size, typical skater for one that big but smart defensive pivot. No points in 7 games.

Scored 50 in 59 in the NAHL last season. Ferris State Commit

Jack Kopacka, owner of absolutely killer hockey name, still on the board after 3 rounds. Uncle bob had him ranked 66th