It’s the calm before the storm of NHL free agency. At 12:00 ET today, teams are allowed to sign UFAs and offer sheet RFAs. Will the Bruins re-sign Loui? Will they sign Jimmy Vesey? Will they finally acquire some defense? Please? I mean, like, y’know, the good ones? Strap on your helmets and get your drinks ready!

Last year, the Bruins charted a new course in dramatic fashion by moving Milan Lucic and Dougie Hamilton. In the days leading up to the start of free agency today, the Bruins were much less dramatic but the moves they made were still very significant. They started by buying out Dennis Seidenberg. Next year’s expansion draft for the Las Vegas team likely factored into the decision, as Seidenberg’s NMC/NTC might have forced the Bruins to protect him.

Sweeney on Seidenberg: "Very, very difficult decision and call to make with Dennis. I want to thank Dennis on behalf of the organization."

The Bruins followed up with signing Scorey Krug to a 4-year, $5.25mil/year extension. Krug is still recovering from shoulder surgery, but he’s hopeful about being ready for Opening Night.

"It's a place that I fell in love with right away."

Talks between the Bruins and Loui Eriksson remain at an impasse, as the Bruins aren’t budging from a 4-year offer and Loui isn’t budging from a 6-year request. Sweeney said that he had “productive” talks with John-Michael Liles. Lee Stempniak expressed interest in returning to Boston. Jimmy Vesey will test the UFA market despite the Buffalo Sabres trading a 3rd-round pick to the Predators for his negotiation rights. The Bruins are in the mix for Vesey, along with Toronto and Buffalo. With $19 million in cap space and a bunch of roster spots to fill, the Bruins should be active in the UFA market today.

TSN released their list of Top 50 free agents. Milan Lucic tops the list, and he may end up getting a 7-year, $7mil/yr deal. Suitors apparently include Edmonton, Vancouver, Dallas, and…hahaha…the Habs.

Should be a fun day, folks! What’s on tap?

Free Agent Frenzy thread is up!!!!!

Looks like David Backes going to market. STL took a run at re-signing him this morning. BOS significant interest in Backes.

Free agent frenzy thread is ready to go. I’ll publish it at noon.

I just saw some chatter about the Leafs being interested in Bishop. That would make me sad.

Nah I just mean, the Bolts are good and the Leafs are…Leafs.

With the contract they just gave Andersen, I think this is unlikely even a little true.

Right, I forgot they grabbed him.

I wouldn't expect the Oilers to be in on Jason Demers today. My bet is they stay patient and wait for Barrie situation to play out.

Still hope in the Demers sweepstakes

I hope this is true. Demers could help us a LOT.

A right side of Chiller-Demers-Kevlar is not bad.

Not at all. I don’t think we’ll get him but here’s hoping. Donny pulled a rabbit out of his hat last year with Beleskey.

Well… there’d been a ton of talk of Beleskey to Boston. It was the contract that was the magic trick

Yeah, that’s what I mean

John Scott is much larger than James Duthie 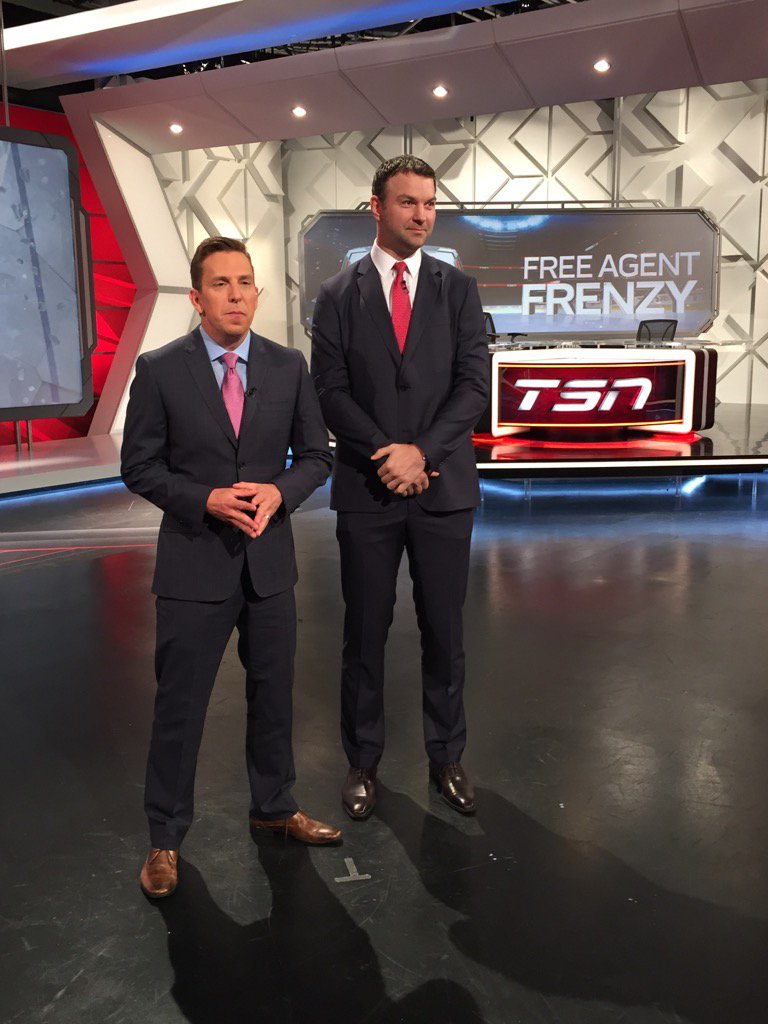 He is much larger than almost everyone. I’m glad Hockey Twitter and the NHL being dicks made liking Scott OK.

Oh man, I’d love to know what he has to say.

As many have speculated, Brian Campbell has made his decision and it's going to be a return to Chicago. Likely a one-yr deal around $2M

Impressive deal for Chicago if true

So, do you guys think we really pick up a defenseman today?

I think we get Liles. Beyond that, dunno. Who we do or don’t sign may say a lot about what the B’s management thinks of the readiness of the D prospects.

If they’re small enough, we may even pick up two at the same time!

Two defensemen stacked together in a trenchcoat?

Or in a horse costume! #Polishcavalry

Why would we dress a couple defensemen up as Jordan Caron?

It’s a smokescreen. No one will want them in that costume.

Hahaha it never goes away!

The #Habs are one of the team pushing for the defensemen Kris Russell.

Please make it so.

Oh man I love this

Today in Slava Malamud is dumber than a bag of hammers:

Radulov in Montreal is a smart PR move. He is still loved in Quebec, and will have people shut up about PK for a bit. Will be interesting.