The AHL has finished its annual Board of Governors meeting, and the divisional alignments have been updated, as well as a few rule changes for the next season.

As any of you who live in the Portland, Manchester or Worcester areas will know, the AHL has been reorganizing in order to allow the Pacific Division NHL teams to have AHL affiliates located much closer to their parent clubs. This resulted in our formerly AHL-rich eastern New England region losing 3 AHL franchises, back-filling them with only 2 ECHL franchises. All AHL franchises have an NHL and ECHL affiliate.
The AHL has now completed re-alignment to match the vision of the western NHL clubs, who wanted an AHL division centered in California, so their AHL clubs could play each other, minimizing travel time & expense.

Teams will play 76 games each with except for 6 of the 8 Pacific teams (Bakersfield, Ontario, San Diego, San Jose, Stockton, Tucson), who will only play 68 games each. That makes obvious sense, right? Teams will be ranked by points percentage rather than total points.

Rule Changes:
The league also updated some rules – most interesting were the changes to fighting.

Rule 46 (“Fighting”)/Rule 23 (“Game Misconducts”)
• Players who enter into a fight prior to, at, or immediately following the drop of the puck for a faceoff will be assessed an automatic game misconduct in addition to other penalties assessed.

• In any instance where the opposing player was assessed an instigator penalty, the fighting major shall not count towards the player’s total for this rule.

Rule 82 (“Icing”)
• In addition to not being permitted to make player substitutions, the offending team on an icing violation also may not use its team time-out.

Rule 1.10 (“Ice Cleaning”)
• The ice cleaning procedures used during promotional timeouts will also be used prior to overtime during the regular season, replacing the “dry scrape.”

These new rules seem specifically designed to discourage the “enforcer” role and staged fighting. The AHL is typically used as an incubator for rule changes in the NHL, so these changes may very well be destined for an NHL arena near you…
Over the past two or three seasons, the NHL teams have ‘de-escalated’ in the enforcer arms race, retiring players like Colton Orr, John Scott, Frazer McLaren & Brian McGrattan by burying them in the AHL and not replacing them. The next step on this path appears to be tightening the rules to keep teams from developing more players whose primary skill is pugilism.

As sentiment, particularly among Canadian fans, has changed towards fighting in the NHL, concussion research in the US has also developed, indicating that repetitive blows to the head, particularly those leading to concussions, is probably a precursor to severe cognitive impairment later in life. The potential liability for the NHL is vast, which can be foreshadowed by the financial impact for the NFL, which has been on the order of 1 billion $US. Is this a means of heading off concussion-related lawsuits?

Updated TFA to be pretty.

Toronto… they’re hilarious. As if Bernier was ever their problem.

Bernier was extraneous after they brought in Anderson. Gives Garrett Sparks a chance to develop as a backup, too.

I thought the Leafs should have cut bait a couple years ago.

Hey All! Still super busy!!! We’re not traveling this weekend, so that helps.

Sorry to see CF go, but he was odd man out.

With all this bagel talk, I might have to go get some tomorrow morn.

Nice double header last night. Three days on the water followed by three nights on the ice. That’s a great week. I’d like to paddle the Mongaup River tomorrow, but the two hour drive each way is too much right now.

The coffee tasted good this morning! Seltzer and lemon juice is on tap.

Not drinking is saving me so much money I’m buying a new paddle – $345. I might skip another month!!!

Bent carbon shaft, 30 degree offset, fiberglass blades. I could get carbon blades for an extra $100

Sorry to see CF go, but he was odd man out.

OTT signed him for 1 year at $900K. At that price, Sweeney could have found a role for him.

Possibly, but considering our current defensive situation, I’d feel more optimistic having another guy with a proven track-record of being “responsible in his own zone”. Kelly logged a lot of PK time and was often Bergy’s back-up for D-zone face-offs. He will be missed.

Agreed. And if he’s disastrous then you send him to the AHL for no cap hit. No risk situation at all

Wow, it got quiet in here.

I took a nice dump earlier.

Bagels are good for the digestive tract.

I like the fighting rules. Seem reasonable. Same for no timeouts after icing. The uniform and schedule rules are goofy

The 80’s were really, really weird.

TSN’s list of 5 AHLers ready to make the leap to the NHL next season:

Greetings from teh land of the Pitts. I went to sign on yesterday at 6:30 but there wasnt a morning skate yet…slackers.

– Two people have been out sick from work for a week and I think I might be coming down with the same thing. Here’s hoping I can sleep it off over the weekend.

– I downloaded the Iron Maiden game for my phone and it’s good dippy fun.

– There’s a Highland Games thing this weekend near my town in Germany. If I’m feeling well, I ought to check it out. http://www.highland-games.info/

I’m sad to see Cageface leave the B’s, but I’m glad he has an NHL contract.

If I understand correctly, there are only 6 players left from the 2011 Cup team: Bergy, Krejci, Marchand, Chara, McQuaid, and Tuukka.

To my mind the 2014 team were even better, but there’s only nine of them left, too. Loved the Looch-Krejci-Iginla line that year and hoping to see Beleskey-Krejci-Backes at some point this year.

Yeah, I’m not at all upset about that period. A Winter Classic win, a Cup championship, a Finals appearance, and a President’s Trophy in the span of 4-5 years? I’ll take that gladly. Let’s have another span like that!

Does Paille still not have a contract anywhere?

Brynäs IF of the Swedish Hockey League.

Aren’t you forgetting Khudobin?
He was a critical part of that team.

I suspect that some of the other Bruins even learned his name.

Nevermind. I was remembering incorrectly. Dobby’s 1 game inteo was the next season.

I think he was part of the reserve roster, and was on the ice for the Cup celebration. 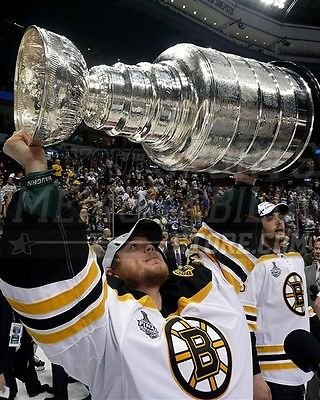 Did you finish that bagel or are you having another one?

Getting another one soon. Fingers crossed they have asiago bagels left.

I read that as Asia-Go Bagels. Perhaps a Chinese take-out bagelry. Is “bagelry” a word? I declare it so.

Asiago bagel with butter is being consumed.

Bagel Watch Day Three: has Bagel Bruin had a bagel yet?

Gosh darnit. No. No I haven’t.