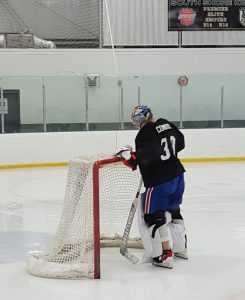 So, I went to the Foxboro Pro League last night and was reminded that despite the rosters being set and posted, not everyone is on the ice each Wednesday night at the Foxboro Sports Center. For instance, I can tell you that Jimmy and Kevin Hayes were playing, both with borrowed numbers, and Brian Boyle wasn’t; there were two number 10s on the black-garbed team and neither of them was Keith Yandle (but one was Kevin Hayes). I spotted Noah Hanifin on one rink but no Jack Eichel. And Mike Condon, noted backup to Carey Price, was the goaltender for a team of mostly college players. Oh, and I spotted no one’s favourite Bruins “reporter”, Joe Haggerty, grabbing a roster sheet and disappearing, presumably to the second floor where people can get a cats-eye view of two rinks.

Anyway, this is all well and good, but y’all probably want some Bruins related stuff. How about this:

What’s great about this deal is that it’s a one-way deal, which means that he’s likely to stay up with the big club. The term and money are good too, because if he sucks, he can just go away.

There was also this news about our old friend, Walter Colin Miller: 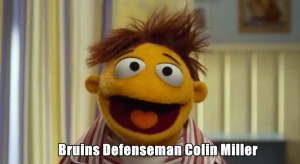 So, Miller is going to be a $1 million cap hit for the next two years on a one-way deal. So, Chiller will be up in Boston this year, which makes one wonder if there are going to be any more defensive signings.

With Morrow and C. Miller signed, #Bruins have estimated $6.73M cap space with roster of 12F/7D/2G.https://t.co/No2EqRDjVI

Im pretty damn happy with both signings as well as the Riley Nash acquisition.

Finally got a work computer. B2B is a blocked site. Womp womp.

I’ll be around, but since it will have to be on mobile, it’s likely to be a lot more sporadic from here on out. On the one hand that sucks because I liked being able to have you guys on a background tab. But on the other hand, his job was probably going to have me too busy anyways. Plus, its probably a good thing that my focus won’t be diverted at first. Gotta make a good impression after all (especially because I have vacation days in my first week)

That all said, I’m clearly going to have to make sure I don’t get autocorrected to kingdom come since I’m not used to mobile.

Finally got a work computer. B2B is a blocked site. Womp womp.
Booo! Considering the massive number of articles per day and untold dozens of readers this site has, how can you blame them?

However, you might try to see if it is just a matter of your browser being petulant. Try explicitly giving your browser “https://bobbytobergy.com” with the ‘https’ and no ‘www’, so it doesn’t have to do a redirect.

Morning all! Sesame bagel with cream cheese and jam has been procured.

The Habs may have fired their fancy stats guy for vehemently opposing the Subban trade:

Sounds like beautiful beautiful chaos in Habs land. I love it.

This reminds me, need to check to see if Preds Subban shirseys are available yet.

Someone(s) you know is trying to plan a trip to Nashville, during which she and he are planning on taking in a Preds game. Perhaps if you’re really nice to them, you could end up with your shirsey.

And I thought asking for tea in exchange for stuff was a cheap enough deal!

Oh, that will be a fun trip! Thanks, but no doubt I will have one by then. Just waiting somewhat patiently until they are available.

You might have to go directly through their ProShop.

Yeah, last I saw on their twitter was them telling somebody they’d be available soon. Whatever “soon” means.

Yeah, I’ve been checking both the fan shop and official NHL one. Not there yet. Maybe this week or next week.

They must be waiting to see if he makes the final roster or not.

Oh yeah. Must be the same for Josi because they've never had his stuff either

I’m pretty sure Weekend Hockey does a tournament in Nashville in the fall. Hoping to put together a team in time for this year’s tourney. Schedule is not out yet. They usually include an option to see an NHL game during their weekends. Stay tuned. Phony, you better be ready by then!

You may not find them on their site. They have woefully limited stock.

Busy, busy week. Workhusband on vacation, and crazypants on vacation as well, so it’s been rough.

Really happy with Chiller and Morrow deals. Seems like we’re going to move a defenseman, though, since we have all these one-way contracts, no?

With 7D signed to 1-way deals, one would think that they are done acquiring defensemen this off-season.

I wonder if they had something else in the works (Trouba, Demers, Shattenkirk) that fell through, causing them to pull the trigger on these relatively easy deals.

Still, these are cheap enough that either player can be buried in Providence if they fail to work out, or something better comes along.

Only question is whether they require waivers. I never know how to determine that easily

Do they sign a veteran guy (Nick Grossman, Barret Jackman) to a one year insurance deal in case of injury or general suckiness?

Love both contracts. Saw someone complain about them being one way which just boggles my mind. For one, if they suck they can be buried in Providence for free (or a whopping 50K for Miller this season) and it’s not like they can’t be send down on a one-way deal.

Today’s really big news does not come from Bs camp or from France….. yesterday I got my ass down to Tony’s Coffee Express in Thomaston, CT for a real fuckin’ bagel!!! It was so good I had another. They do a french toast that is too good for words. Eat your hearts out, fuckers!

That’s a french toast bagel, sorry. I was still so excited about it I forgot to write bagel.

Hahahah I love you

Morning All! Making a screen house for the blueberries today. The blueberry bushes are loaded this year. Making a more permanent structure to keep deer and birds away.
Nice double header last night, one more tonight.
Coffee is tasting pretty good these days.
Sunday the month of no drinking is over. What to drink, what to drink?

I’m thinking bourbon is a good choice. Are there such a thing as bourbon bagels?

This place in Lexington, Kentucky has maple bourbon bagels:

Two of those with bacon, please!!!

Bagels with booze?! That’s my kind of bagel!

Pens fans with another Cup… Yuck!