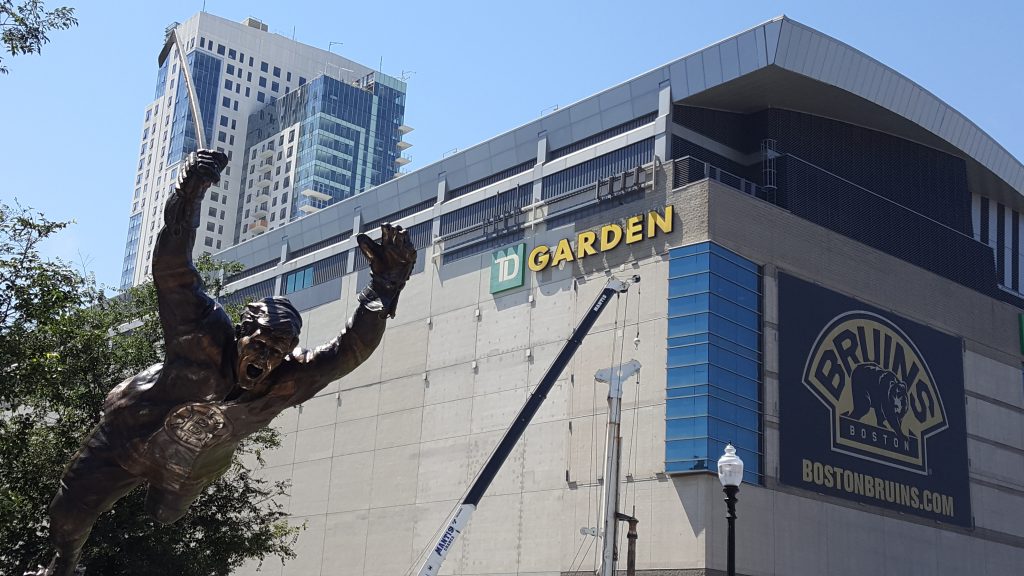 I’ll take inspiration where I can get it. The problem is, I haven’t found it.

Yesterday, I walked around Boston. The Pokemon were lacking, so it was a good opportunity to just explore. I ended up at North Station, then went up to the Bruins ProShop just to take a look. Good news: if you wanted a Chris Kelly, Loui Eriksson, or Dennis Seidenberg shirsey, you can get them for $10 each. They advertised having those former players’ jerseys on sale for 30 bucks, but I couldn’t find them. However, if you were looking for a deal on the Winter Classic jerseys they had left (Krejci, Connolly, and uncrested), you would still have to pay $240. Bastards!

Anyway, back to outside. They moved Bobby Orr out to the adjacent park because construction on that Shaw’s that-nobody-really-wants has begun. I guess someone wants it, but it just makes getting around that area stupidly difficult right now. I was coached on how to take the above picture by a couple of ladies lunching in the park. Of course, my right foot stepped in a puddle of SOMETHING and had to debate whether or not I wanted to chop off my leg, soak it in bleach, or be completely normal by washing it while considering buying a hazmat suit.

All of this is unimportant.

My problem right now with the Bruins is that I find them completely uninspiring. My namesake is gone. We won’t be chanting HINGA DINGA DURGEN in game threads anymore. The defense looks strikingly similar to a dumpster just prior to the being-on-fire part. I can’t find it right now, nope. Maybe training camp will reveal something different. Maybe the World Cup of Hockey will get me excited for the sport again, seeing Bruins players play making me realise what I love about them. (By the way, ESPN has released it’s schedule of the games. They are televising every game.) I hope so.

Anyway, maybe I need reminding- maybe we all do- about what we love about the Bruins.

I think this is my fourth consecutive day of checking in. Hooray winning streak.

Today’s a review day for my class. I get to sit in the classroom and see if anyone shows up. It’s to their benefit if they do. I’m known to hand out my share of hints to those who put in extra effort.

Why do I love the Bruins?

Most of all, they represent Boston, my favorite city in the USA. I don’t need more than that, honestly.

baiscally….so you dont have to listen to his stupid head…”Miller has the same agent as Vesey so its a quid pro quo that signing Miller helps land Vesey because we did his agent a favor.”

Just like Chara’s hockey days were over because he got his real estate license…while he was recovering from injury…because he needed something to do. Haggs is so dumb.

“hockey sources”…aka he talks to the little dome hockey players in his basement and they talk back.

I love this image.

I talk to bobble heads because they just nod “yes” back at me.

Well you sure arent going to get agreement from the wife…might as well get it from somewhere.

There’s a nice serenity to this place when no one is on the production floor & I can work by myself.

Thanks for this! He had that kid lined up from jump!

Cool. I heard it from the bathroom but hadn’t seen it.

Nothing arouses me like a perfectly timed hip check.

I don’t remember Leetch being a big hip checker. Maybe it’s because I always confuse him with Mark Messier due to the whole “90’s Rangers” thing? Idk

Back when we had great D.

What do you think it would take to get him back? I’d happily give up Krecji to put Boychuk back in Black-and-Gold.

and his baby blues….and just hearing jack yelling ” A BOMB FROM JOHNNY ROCKET”

He had a monster of a slapshot, but his goals mostly came on wristers.

BTW, I was giving a center a hard time last night. He asked “Don’t you ever shut up?” I had to tell him – ” No I don’t because I’m a long winded striped mofo. ” The look on his face was priceless.

This is a wonderful story.

I regret that I only have one recch to give you. That’s awesome

There are not enough Recch’s for this

I must have missed this!

Morning all.
Bullet points for DAYS
Why I love the Bruins

I woke up to the Misfits’ “Die, Die My Darling” this morning.

That is a strange alarm clock.

I use the alarm function in the iHeartRadio app on my phone.
That way I can always have the music I want when I travel, without having to find a decent radio station.

As expected, I will finish the engine swap today. I couldn’t find my gear puller yesterday, so I made one!

On my second cup o coffee as the first one was sooooooooooo good!

A FEW THINGS:
-I don’t need reminding, I’m actually really fucking excited for hockey season.
-Our internet is down at the moment.
-Don’t focus on the bad D. Focus on the interesting changes we’ve made, and the flexibility Backes brings us, even if the contract length isn’t optimal.
-Our internet is back up.
-Also, in a year or two, our defense is going to be really good. Carlo, Grzelcyk, O-Gara… Oh yeah!
-I look fucking adorable today. Orange sweater and skirt with pineapples.
-Trivia tonight with the BFF.

-Also, in a year or two, our defense is going to be really good. Carlo, Grzelcyk, O-Gara… Oh yeah!

Not to mention Lauzon and possibly Zboril..

What (if any) are the chances of some of them being ready this year?

Chara, Krug, Liles, C. Miller, K. Miller, Morrow, Quaider….whomever has the best camp will most likely be called up and see time while Quaid or K. Miller are injured. Some people feel like Carlo is closest.

Don’t focus on the bad D.

You know me. I maybe a “doctor,” but my PhD is in phallic humor.

Orange you glad you wore that outfit?

It’s Thursday. Almost to the weekend. And tomorrow barely counts because it’s a community service day at my new place, so I’ll actually be at a food pantry instead with a cookout later. So yeah. This company actually does events with its employees. There’s a nice change.

There might be a coconut at the food pantry.

Hopefully we can find some limes, too.

I read it as food party with coconut!