Who do you talk to about concussions?
Well… Paul Sorvino has stopped taking my calls… and that dummy I made out of butter & shotgun shells has fallen apart so… how about Gabriel Landeskog? He wrote a nice little piece for the Players Tribune.

Speaking of international play, the schedule for the World Cup of Hockey has been released. We will get a dozen games in the group play, followed by 2 Semi Final games and 2 (or 3) Final round games.

How is preseason in the KHL?
Foggy, apparently…

The NWHL has entered into a partnership with “You Can Play”, the group encouraging LGBT acceptance and participation in hockey.

Each team has a YouCanPlay captain and will make a promotional video. The CWHL and NHL have also done this in previous seasons, but this is the first year the NWHL has officially jumped on board.

They are also retiring last season’s jerseys and taking fan votes on new ones for the upcoming season.

Our inaugural season jerseys are being retired, and you get to vote on the new designs! https://t.co/KnoNh24zQA pic.twitter.com/nfLcsSoH6S

Why? I have no idea.

It’s final exam day. After the exam is over and I’ve graded them all, I’m gonna treat myself. Don’t know to what yet, but it’s definitely a “treat yo self” kind of day.

I’ve been rewatching Scrubs. Such a great show.

All except for the last season, which didn’t happen.

Dr. Cox is going to be in a new series on IFC called “Stan Against Evil”. I look froward to it.

Season 8 is the last season. You’ll get no argument from me.

When I binged on Scrubs again late last year, I watched the fake last season and the only thing that was good was that Denise wore a Bruins jersey once.

That sounds about right. I’m about halfway through season 8. I’m trying to brace myself for the finale. I’ve watched those two episodes so many times, but the room always manages to get dusty. Every single time.

I understand. Same thing happens with me.

a new series on IFC called “Stan Against Evil”

At first read, I thought this said “Satan Against Evil”.

Evil is all about perspective.

is it anyhting like Dale and Tucker vs evil???

I think it’s going to be more Evil Dead/ Army of Darkness-like. Also, I heard D&T 2 is happening.

Is that good or bad?

i think it could go either way. I would have to see. It could be Dumb and dumberererer bad.

Brilliant. They found something to swim in, I guess.

so in other news..my boss called me tuesday and told me im needed in PA again. So i was like “ok well im house sitting till the 10th, so i can fly the 11th. Also, its my birthday on the 18th and kinda wanted to be home that weekend. Then on the 27th i have a golf tourny that i have to be there for.” So she was like..”ok we can send you home on weekends no problem” (easy for her to say shes not 6’10 and has to fly on airplanes). So i was like “so…29th to ..what the 5th?” and she was like…”would most likely want you longer than that.” so i was like..ok…so…what? “I’ll get back to you on that.” As of today still nothing.

There has to be a medium. Although travelling home for the weekends is not a bad deal. At least you know they like you.

You didn’t know this? Huh.

Anyway, the only time I’ve seen him was when he was seated comfortably at a Bruins/ Isles game and he didn't want to say hi to me. His height struggle is real (at times).

You didn't spring from your seat which is totally what we deserved.

I’m going to just keep busting your chops about it until we meet someday when you’re not stuck in PA.

there should be a B2B big E meetup. Assuming im not in PA.

Well, yeah. Anthony is having a party in a couple of weeks, but you’ll be celebrating your birthday instead. I’m having an Oktoberfest in, well, October. Stripes requested a weekend in the middle of the month, so I’m guessing it will either be the 15th or the 22nd.

Hey, I’m not promising pie. I’m still a ‘maybe’. You wouldn’t be missing much; I’m not that fun right now.

Any chance to see you & IW is a good day

and I know. That was just really funny (also delicious)

Big E is Sept 16 – Oct 2, 2016….I should hopefully be back by then. Would actually be a decent halfway point for most people.

If you do octoberfest in October let me know (even though they are actually held in september (43 days and counting actually).

I know that it’s usually in September. You can’ t have your own if you’re going to others.

I’ll let you know. It’s just a matter of trying to plan the right time for it.

or you just have them all at the same time and set up tents next to each other with picnic tables!

I would be okay with this.

I missed the Big E part of this the first time I looked at it which made my response weird.

haha its ok..looks like ill be in PA till the 25th, so if anyone wants to go the weekend of the 1st, im totes down.

That’s why I put it in sarcastifont. You were wedged in there.

such is life for me. good thing im not spiteful. I should totally get a handicapped sticker though so such things.

I have a niece that topped out at 4′ 9″ and could have a handicap plaque..

Yes, but it it also has to be a dwarf that’s on a rampage, so it can be a small medium at large.

I sympathize with the flying disdain. I’m only 6’0″, but have shoulders slightly too wide for the seats. So no window seats or center seats, and sometimes I still get bumped into on the aisle.

Going to PA I’d normally drive rather than spending 45 min driving to/from each airport, waiting an hour at each end for security/luggage return, and an hour+ in transit. But for a weekend escape, it’s probably a 6-8 hour drive each way and the exhaustion might not be worth it, even if the time is close to a wash.

But for a weekend escape, it’s probably a 6-8 hour drive each way and the exhaustion might not be worth it, even if the time is close to a wash

Translation: we finally discovered that we’re too old for that shit.

8 hours is even tough for a young wipper snapper like me.

We drove to Edmonton once. To be fair, not all in one shot, but we did drive through Northern Ontario in two days, which if you’ve been there, you would realise is a tough haul.We took our time from there, even spending a couple days in the Calgary area because we wanted to explore some towns in southern Alberta.

Yikes. I took a similar trip from Chicago in October.

Goodness, everyone is so tall. HHG is 6’5″ and that’s a full foot taller than me. I think we need a tallness fest.

Almost everyone is short (except from your perspective.)

all of life is dependant on relativity.

$70, four guaranteed games, teams are assembled with A, B and C lines (more fun than this way), money goes to ACLS

I don’t think I can say no.

I know an Olympian! I used to work with Laura and one of her sisters. Her dad and I talk Red Sox whenever we run into each other.
https://www.facebook.com/notes/joe-posnanski/the-rio-diary-day-1/1064835460279335

That said Sean Burke lived down the road from me when he played for the Whalers.

Didn’t we vote on the last shirt design? Are the saying we chose poorly?

Faster double header last night… I survived and the knee is feeling like it’s on the road to recovery. I was a little worried about it.

Looks like we will forego the river this weekend to do some practice disc on Saturday. Tournament on Sunday.

I could watch that McAvoy hit all day.

Coffee – looking for that second cup.

McAvoy also had a nice breakout play, but for the life of me I could not find the clip when I tried to link to it.

Morning ya’ll.
-I’m worried that the Whitfield hiring means that the P-Bruins will never win a 3-0 series again. As Doc pointed out last night he’s the only player on a team to blow a 3-0 lead in the NHL & the AHL.
-GV softball drops to 3-11 on the season, however it was probably the most fun we’ve had in a month. Thank heavens. We also played some quality defense (aka, did not have major mistakes all over the place).
-That was a good piece by Landeskog. Some quality stuff right there. I love the Players Tribune
–

Patrice Bergeron is not going to be happy about this pic.twitter.com/O27sDWDVYU

i cant see the picture 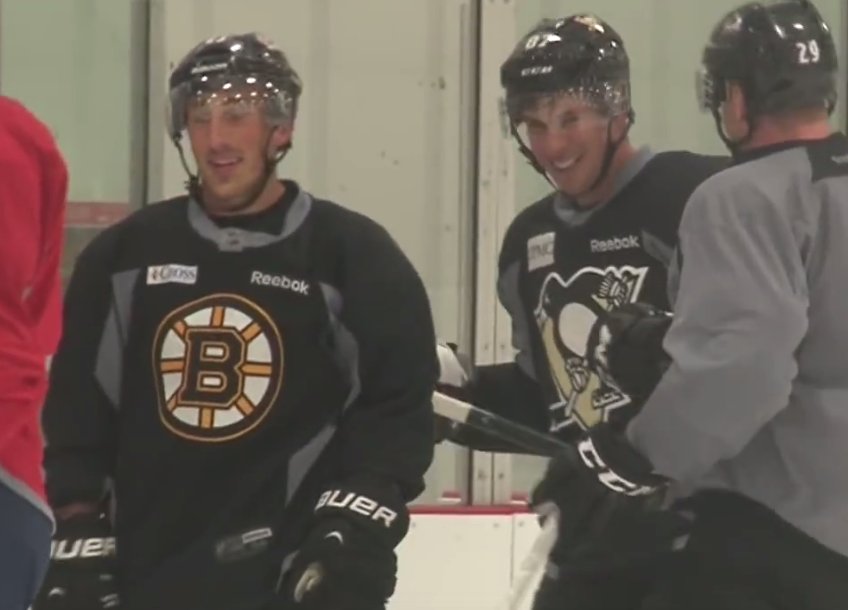 Marchand in practice gear laughing with Sidney & another Canadian player

Patrice and Sidney won two Gold medals in the Olympics, so I don’t see the problem here. Muckraking because it’s dead. I expect better of him. Tsk tsk.

A lot of this has to do with my mega-loathing for the Penguins, so if they were in Canada gear I wouldn’t be bothered, but moonlighting with a Penguin NO BRAD NO

I am not gonna lie…other than Crosby and fuckhead letang…i really enjoyed this past year’s team. The fact that it was the non-core players that were coming through when needed made the team fun to watch.

the fact that they weren’t the Hawks was nice

truth…it did annoy me that Crosby got the MVP…should have been Kessel.

Speaking of that fuckhead Letang, here he is disrespecting the Stanley Cup: