Today, we’re taking a trip around the NHL, mostly West Side it seems.

Patrick Roy is no longer with the Avalanche. Not only did he leave his coaching position, he also left a cushy VP of Hockey Operations gig. Joe Sakic weighed in on this sudden departure. I’m just sad that we won’t get to see Roy pull his goaltender with ten minutes to go in the third period.

The Hockey News is speculating about who could be the next Avs coach. So many familiar names.

Team Sweden has named their Captain for the World Cup of Hockey.

Remember how PK Subban proved his awesomeness when he arrived in Nashville? Remember how everyone and their sister loved it and shared it with the world? Well, here’s Dave Lozo’s suggestions for how every team can get that kind of publicity. You’re probably not going to like the Bruins one. Or maybe you will, who knows?

On the Player’s Tribune, Logan Couture discusses the five toughest defensemen he’s faced in the NHL, one of which happens to be a favourite of a couple of B2B writers.

Joel Ward writes about how his father, overcoming adversity, and accepting the help of others helped him carve his path into the NHL. 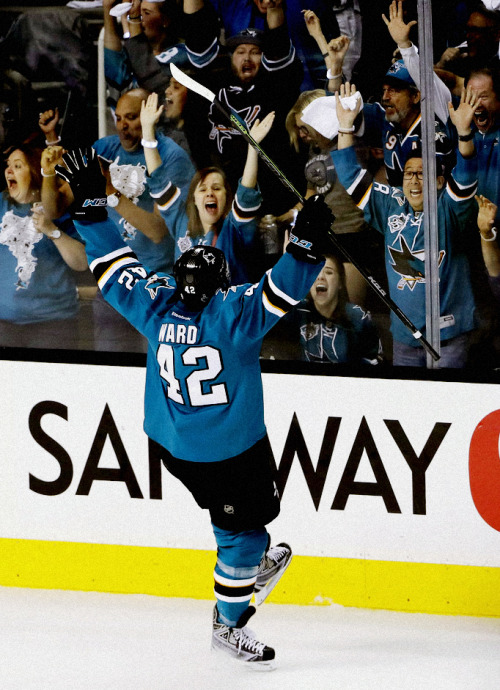 Anyway, have a great day, a great weekend and keep cool.

I have now reached peak boredom taking screenshots of peoples printers & having them be full sized so that when they click on the icons to do things nothing happens.

In college, My friends and I were very white and nerdy and dating white women wasn’t working for us, so I created a FB group about dating nerdy men wanting to date black women. I just got a notification from FB. The group has over 200 people now and nerdy white men and athletic black women are actually using it to connect.

You should make a NerdyMenInterracialMinglewithAthleticWomen.com

Pick up lines: “Hey baby, just thinking about you gives me a partial differential equation.”

“Show me your algorithm and I’ll give you my logarithm.”

“X= Y don’t you come over and help me make a bell curve?”

I saw the news about the Colorado coach yesterday, and I was all like

I’ll show myself out again.

I found out my great-great grandparents were born in Slovakia.

Nice! Do you know which town? Ooooo…and what were their family names? There’s a pretty good chance they could be Hungarian (or non-Hungarians forced to change their names to a Hungarian equivalent during Magyarization).

Don’t know which town. Immigration papers state they were born in “Slovakland”. They would have been born in the mid 1800s. The original spelling of our last name is somewhat of a mystery. My grandfather said that it was originally pronounced “Betch-ka.” Why it became Badgio he really doesn’t know. My great grandfather never explained why to my grandfather.

EDIT: My great grandfather was born in Albania. He considered himself Albanian and spoke English, Greek and Albanian. If you meet another Badgio, I am certainly related to that person. There’s a few of us in Brockton and Bridgewater. Evidently one of us settled around Philadelphia because Facebook brings up a ton of results.

That might be the Hungarian last name Becska, which would be pronounced exactly as you describe. There’s also the Polish word “beczka”, which means “barrel”. “Beczka” also appears to be a Polish family name. There were definitely ethnic Poles in the Kingdom of Hungary, which included Slovakia. The Hungarian Becska might be a Magyarification of the Polish Beczka. In Slovak, it might be spelled Beczka like the Polish, or maybe Bečka.

Bečka!!! Yes! I’ve seen this before! I’m having a mini epiphany over here.

Bonus points for correctly using “Magyarification” in a sentence.

I do believe that automatically makes you related to Chara.

Oooooo!!! Nice one! Saving that!

Morning all. Even with the AC going it’s still a balmy 81 degrees in my office. Our AC leaked water into the electrical circuit in the floor below, so we had it turned off yesterday. It sucked, a lot. I got fed up & replaced the unit with another one, which is tipped back at a sharp angle. So even in “econo mode” it is dripping all kinds of water out the back onto our front stairs (making them delightfully slippery).
Hooray, summer

I wish you luck…they fixed ours after 3 months of complaining about 81 degrees in my cube.

P.s. by fixing all they had to do was turn the thermostat down from 76 degrees to 72. …because you know…76 is room temperature…. *rolls eyes*

Buongiorno!
The Bruins publicity stunt is just weak. I don’t like it, but I don’t dis-like it either. The best one is Calgary’s by far. It’s Friday and it’s supposed to rain this weekend. I am kind of okay with this development as long as it doesn’t rain next weekend. PARTY TIME!

The Calgary one was definitely the best one I read, but I stopped reading them after the author apologized for how bad his jokes were one too many times.

Yeah you can only make that joke like, 3 times tops. Not 10

Bruins should hire Talbot as head of PR.

At a certain point you need to ask yourself, “Why am I still writing this article?”

As much as I dislike Weise, I got a kick out of the Phlyers one.

And if you want to be a hit in Habs-town, have Shea Weber hit Marc Bergevin in the face with a slapper. Somehow it wasn’t a problem in Nashville, and Poile is a much more likeable GM.