Game play in the NHL begins again tonight after a four-day break for the All-Star Game. Tonight’s Bruins game is the first in an away back-to-back; tomorrow night’s game is at the the Capitals. With starting goaltender Tuukka Rask travelling from Los Angeles and current backup Zane McIntyre returning from Pennsylvania after the AHL All Star Game, looks like old friend Anton Khudobin could be back in net tonight.

🎥 Anton Khudobin on being back with the big club: pic.twitter.com/isEc2yH5yU

After having a terrible time and leaving the game on Thursday with a twisted ankle, Brandon Carlo says he feels good and presumably will play tonight. Yes, he’s hit a wall or tumbled off the map -really any number of idioms could be used to describe his play of late- but surely he will benefit from this time off.

February will see the Bruins play only 10 games after having a compacted, exhausting schedule the past few months. (Thanks, World Cup of Coffee.) While many teams have already have taken their five-day bye weeks, Bruins players take theirs February 13-17. The league first announced this back in 2015 when preparing for the upcoming season and the World Cup. During the bye, there will be no practices for the five-day break:

The Bruins will not be playing on the sixth day but will likely be travelling out to California for the dreaded West Coast trip. So, we totally have that to look forward to.

Tuukka Rask was the first goalie off the ice at morning skate.

Sounds like Tuukka tonight.
He was solid in the shootout on Saturday. Meh in the ASG on Sunday.

Here’s an interesting thing that I pulled from this article by Amalie Benjamin:

If you’re looking to watch some impressive power-play units, watch the Atlantic Division. Of the top six teams in the NHL in power-play percentage, four of them hail from the Atlantic, with the Canadiens second (23.5 percent), the Toronto Maple Leafs third (23.3), the Lightning fourth (22.8) and the Buffalo Sabres sixth (22.5). Of course, the division also has the worst power-play unit in the NHL; the Red Wings have scored on 18 of 162 man-advantage opportunities (11.1 percent). … The Atlantic also boasts two of the top three penalty kills in the NHL, with the Boston Bruins second (86.5 percent) and the Maple Leafs third (85.4). The Carolina Hurricanes lead the League (88.1).

Isn’t the Atlantic supposed to be weak?

Right? Doesn’t the whole east suck, according to everyone?

Is there a stat that gives a ratio of Power Play to Even Strength? I feel like there should be one and I’d want to call it the RAT stat for some reason, maybe because so many teams are good at drawing insane penalties.

I feel like the east plays a more playoff style hockey all year. The west seems to run and gun more, then try to buckle it down at playoff time. It’s more accurate to say the east is more boring than the west, but doesn’t suck to any greater degree.

I was doing kettlebell squats last night
It’s rumored that Jagr does a gozillion of these every day (well, it is a rumor). Might have to try some as the knee improves.
Have you ever used a slide board? I found mine at a local Goodwill store. Not really a board, you can roll them up. plastic sheet with a bumper on each end and slippery booties to wear over your shoes. They are really helpful for developing your stride.

just had to google “slideboard” – it looks great. My sister is big into keep fit stuff, she would love that

It looks like something that would cause me serious injury!

I hear they’re pricy, but on the hockeyplayers Reddit page, people say they buy stuff at Home Depot and make their own. I think that’s what I’m going to do.

And, judging by Jagr’s thighs, and all the rumors about his crazy fitness routine, I 100% believe that.

I set two alarms because in my sleep I know how to dis-alarm one. Today I found out that number is two.

Oops. I do the two alarm thing as well because I always tell the first alarm to fuck off.

I’ve been hitting snooze like forty times a morning lately. I need to get it together.

That was the one good things about living with someone who also slept in the same bed. When that alarm went off, you got to turn it off or get moving!

For this reason, my alarm was always located across the room from my bed. Forced me to at least step out of bed, even if only briefly

That was my trick in high school. It worked reasonably well.

I tried that once. Then crawled back in bed and went back to sleep. I did not do well waking up in college.

I always had problems when I used alarms in college. It often ended poorly for the alarm clock. One day the alarm did not go off and I missed something important. It was one of those drop-leaf mechanisms.

Well, I had a large screwdriver within arms reach of my bed (one of those really big ones that gets used as a crowbar as often as a screwdriver). I drove the screwdriver through the front of the clock — sending little black numbered tiles everywhere — and went back to sleep.

I have since found that my best solution is to go to bed promptly, and make sure I don’t have to get up prior to 7:30am. Getting up for all-day classes prior to my previous job was a nightmare.

Remind me not to wake you up. Ever.

I wish I had known this alarm story. However, I cannot do the “the sun wakes me up” because truthfully I never want to be awake.

I’m usually awake before the alarm goes off. Just knowing that an alarm is set is enough to make me not sleep well. I’ll be up three or four times during the night to see what time it is, if there’s something important going on. Jo’s alarm doesn’t affect my sleep that way for some reason. I still get up, but no place to go at a special time takes the pressure off.

I do set an alarm, but the living alarm clock (aka six-year-old daughter) usually activates before it goes off …

Morning all. It’s cold and I want to not be at work and would rather go back to bed.

It was colder than I expected this morning. At least my office isn’t as cold as it was yesterday.

Maybe I’ll catch some of the game for once.

So, six games to play between the AS break and the “bye week” and there’s also a four-day gap in the middle of that stretch of games, so hopefully the guys will be able to keep concentration during that.

One possible advantage the Bs might have from getting their break at this point in the season is that on the run-in they could be facing teams as tired as they were so maybe we won’t get the traditional Bruins weak finish to the season. Here’s hoping.

I witnessed first-hand the phenomenon of playing-to-the-level-of-your-opponent last night at darts.

The standard was very low early on and I was in shocking form. After an hour or so a couple of old boys at the bar joined us, and they were pretty tasty at darts. All of a sudden my own game picked up and the arrows started going where I was aiming them! Can’t really explain it – wasn’t trying any harder (not consciously anyway) – just that when the level of competition went up my play improved.

I can sympathise with the Bruins now.

Time for a spot of lunch now. Tonight’s game is a 12.30am start for me – a bit too late to stay up even for the first period. We’ll see.

Win or lose, I just hope they stop looking lost out there.

Time for a spot of lunch now.

If I didn’t know where you were before (or if your name didn’t say it), this line gives it away, haha.

Yes! This is the most London thing I have ever read on this blog.

I’d say the user-name should be a dead giveaway, but then again, I get confused every time I see the Ontario Reign uniform.

Silly Ontario story: Last time the Pats went to the SuperBowl, I bought tickets in the few minutes after the AFC conference championship. It was played in Arizona (right next door to the Yotes’ arena). The next day, the airport was having A.C. problems so it was ~85 degrees in the gate area, and the airport folks were giving out free bottled water.
It was Ontario brand water — never heard of it? That’s because it also is out of Ontario California and is rarely sold east of the Rockies.
The gate area was overrun with Seahawks fans, and they refused to touch the water because ‘That’s New England water’
– A. California, dumbasses
– B. Ontario Canada is not particularly partisan towards any NFL team other than the Bills
– C. It’s water and it’s stupidly hot. Drink the fucking water. 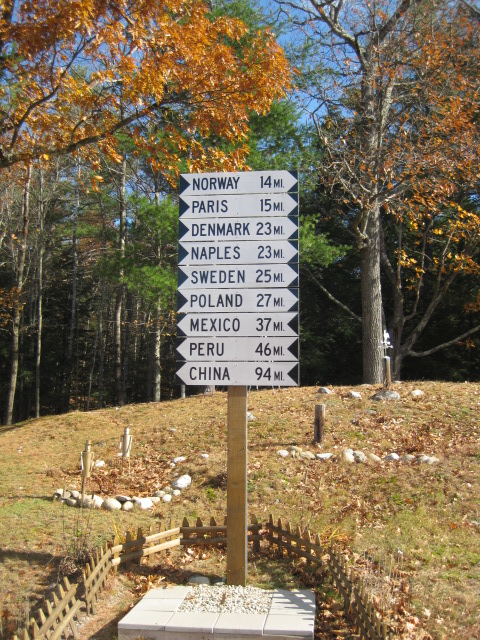 Ha ha! Where is that?

They’re known for their prowess in the fields of geography, and being incorrect!

All tese places are towns in Maine!!!

So many states have places named after other international cities and countries.

Fun fact: Minnesota has towns named for both my first and last names.

Those fans were especially obnoxious. Doing their stupid chants every few minutes. You guys fucking lost, stop it already.

Guys at the Yotes Pro Shop were pretty cool.

Time for a spot of lunch now

That hit the spot!

Hey, yer man got in the Royal Rumble didn’t he? Someone told me Finn Balor was a good bet, but he wasn’t even in it as far as I could tell.

Don’t know much about WWE, but I used to love it – me and my sister both. We went to see it when they came to England in 1991 or 92. The Undertaker was in it then and he still is now! The Jagr of WWE!

Jagr is in much better shape than The Undertaker! He does not look good at all these days. Royal Rumble is always a fun time. Just a ring full of dudes throwing each other around.