For the first time since 1993, Harvard won the “Beanpot” hockey tournament last night.

Forward Nathan Krusko, a freshman, won the tourney MVP, scoring the go-ahead goal last night. He would score twice and tally an assist versus the Boston University Terriers. Harvard went on to win the game by a score of 6-3, outshooting their opponent by an impressive 46-17.
As for Bruins prospects?
Terrier D-man Charlie McAvoy, took two short-handed penalties, resulting in a pair of 5-on-3 situations, resulting in goals against. Jakob Forsbacka-Karlsson would be one of the defenders remaining on ice for both tallies. The first was a boarding vs Bruins prospect Ryan Donato. Donato would score an even-strength goal in the 3rd.

This would be the Crimson’s 11th win in a tournament that has been dominated by BU and BC.
Learn more about the Beanpot at www.beanpothockey.com

Would now be a good time to listen to the Whalers fantastic old theme song?
Damn right it would.

Is there ever a bad time?

My eagerness to not screw up the interviews today means I will arrive in Hopkinton 2.5 hours early. Is there anything to do there to kill time?

Good idea. Maybe not be in interview shape when he’s done.

I think I forgot to say Happy Valentine’s Day?

I generally like the holiday but I am also generally Valentineless because I am just not a person you want to pair yourself with (or that can even bother getting to that point, because I have no patience for dating). It is my mother’s favorite holiday, which I think is ADORABLE, hence her nickname, Adorable Irene.

There are some great Valentine gifs out there.

Happy Valentine’s Day to you and AI!

The B2B site is doing that weird thing where you can’t find today’s thread. I found it through the next game tab.

I don’t get it. My phone is logged out and gets yesterday’s front page. My desktop is logged in and gets the correct one. I checked the page cache controls and they were off. I toggled on/off, purge cache, and still the wrong page on the phone.

Whatever you did, it worked!

WHO WHAT WHEN WHERE

I’m reading our current selection now and don’t hate it yet, but am having a hell of a time feeling anything about it. Appropriate, since it’s about machines.

I keep looking at it, but I’m yet to crack it open. I need to get started.

It’s really fucking with my enjoyable reading. I haven’t read a book I’ve wanted to since we started this!

Morning all! Uh, it’s Tuesday. That’s all I got this morning.

Good Morning, pals! Phony, I think you were AWOL the day I said I’m stealing that.
Jo is still sick – Happy Valentine’s Day? I like valentine’s day, even if it is made up to sell shit at a slow time of the year. At least I like it now. There have been years I was less fond of it.
I’ve been fighting off that flu she has and am winning so far. I use a broad spectrum of remedies, classic home remedies, health foody, granola, crunchy herbal remedies and am not afraid of pharmaceuticals!! I will crush you, virus!
Chillin’ today. I may break out some 80’s Bruins games that I still have on video cassette. Video cassettes, kids, were a predecessor… oh, never mind.
Coffee!!!! (maybe I’ve had enough!)

We have a thing called Lemsip – might have a different name in US, but I think it’s basically a really strong painkiller that comes in powder form and you pour hot water on it to make a drink.

Not sure if it cures anything but it makes you feel a bit better while you fight off the virus. The trick is not to use too hot water as that kills the active ingredient.

I told little ‘un the other day I had a tape somewhere of the band I was in as a teenager. She replied with a puzzled look “what’s a tape?”

I used to be with it, but then they changed what ‘it’ was…

Grampa has some great lines!

I think I do a fair job of keeping up with the times but kids sometimes say things that depress the hell out of ya!

I probably have a tape or two somewhere.

The time between the extinction of tape decks and the advent of “Aux” ports in every car, though, were dark times for those who wanted to use an MP3 player.

There were those cassette looking things that went in your tape deck, but had an Aux port on a wire for extra convenience.

That’s my point. Without the tape deck, those things were useless.

My father used to use one of those to hook up a portable CD player to a car without a CD player. Oh, the 90s.

I used to be with it, but then they changed what ‘it’ was…

I died a little on the inside when I had to explain what a Commodore 64 was to a teenager.

I know what it is (thanks technical background), but man, that outdates me by a few years.

True story: A couple years ago, my niece saw a wall phone and went, “OH MY GOD, I ALWAYS WANTED TO USE A PHONE LIKE THIS!!!!!” 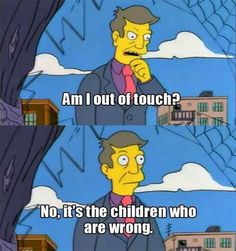 Several years ago when I was managing a game shop, a teenager came in and asked for the new Star Wars “Ay-Tee Ay-Tee” model.

Me: I saw all three original movies in the theater when they came out. When I was eight years old, I had an argument on the playground with a friend of mine over whether Vader was lying about being Luke’s dad. It’s called an AT-AT.

Me: Don’t argue with an eight-year-old.

Don’t argue with an eight-year-old.

At-At. You don’t spell out the letters.

Anyone remember the Atari 2600 Empire Strikes back game that was just endless shooting of @@s? I loved that game!

So it’s like halfway between a Captain 32 and an Admiral 128?

I’m going to check out the Lemsip, thanks.

Phony, I think you were AWOL the day I said I’m stealing that.

Probably, but I am OK with the theft!
Thought of you last night, a high school friend’s little brother was reffing the Beanpot. I was actually thinking that when I feel like my skating is back where it should be, I will making taking officiating classes. Seems like a fun way to make a few bucks.

Also, how is your knee?

a high school friend’s little brother was reffing the Beanpot

That is very cool! He must be really good, as Beanpot final is an honor.
Definitely get into reffing! It will change how you look at the game. I can’t tell you how many players say “Holy Crap! I never saw the game this way before!”.
The knee! It’s really improving! It feels almost normal until I do something stupid, like trip over the shirt I threw on the floor instead of in the hamper. I’m milking it out a bit now. I need to spend as much of February at the new house as possible. I’m thinking early March I’ll be back on the ice. I miss it, but I do like being home in the evening. Games that start at 11pm, stuff like that, I’m not missing that much. Guys saying “Cash, I’m gonna have take a penalty. It won’t be bad, but that guy is being an asshole.” “Okay, thanks. Do what you have to do.” Yeah, I miss that.

Definitely get into reffing! It will change how you look at the game. I can’t tell you how many players say “Holy Crap! I never saw the game this way before!”.

And you get to say “Five minutes each for FIGHTING!”

Wait, you can kindly inform the refs you are going to commit a penalty and still be considered a god guy?

Tonight is going to be fun.

When was the last time the Bean Pot updated its website?

VA (and others), you mentioned you can’t get into college sports, which is fine. Imagine the Beanpot, but from August to November. That’s SEC football.

Yeah it looks like most of the website is around a couple of weeks out of date.
They don’t even have the semifinals results on the main page, let alone last night’s.

I think I struggle to get into college sports due to where I live. The only real big thing would be college hockey, but UNH is well over an hour away, and I have no ties to any school not going to college myself. I cheer for Alabama thanks to family, but I wasn’t broken up at all when Clemson pulled off the upset lol. Now my family down in Alabama, boy were they pissed!

If I didn’t go to Northeastern or some other D1 school, I doubt I’d care about college sports at all.

PLEASE when the hell was Tennessee ever relevant in the SEC? oh, that’s right, 20+ years ago!

They had a chance this year!

they NEVER had a chance!

…am I doing this right?

I don’t do football, and college football is absolutely NOT a big deal in the northeast. We’re all about professional sports. College hockey is pretty big in town, though – how could it not be?

Well, only BC has D1 Bowl division team. So that makes sense.

UMass technically does now, too.

I say technically because they are, well, not good.

OH MY. Yeah, they make Wake Forest look like a power house.