Guys and gals, we have to talk about this.

Haha just saw this pic and I love it pic.twitter.com/WCGWyk2tas

David Pastrnak, aka Pasta, saw this and tweeted it. Now I know that not all tweets are endorsements, but I think the kid gets it and obviously loves it because he said so.

The Bruins are in action tonight against the Ducks in Anaheim at 10:30pm on NESN. Surprisingly, NBCSNPDQOMGWTFBBQ is not broadcasting this game under it’s Wednesday Night Rivalry brand. Anyway, we’ll have the late thread going up for all the one of you who might watch it. Hey, that would be me. Anyway, I’ll have a recap for you on Thursday AM.

So…how long do people think the Bruins can hold onto this win streak?

Curious to see peoples opinions on if this team is just Riding the confidence wave of a win streak, or if they are playing above and beyond any reasonable expectations, or if they are finally playing with their expected potential.

Honestly I didn’t think they’d hold on to it this long. It’s kind of a cop-out answer, but I’m just riding this season out. What ever happens happens because they’re a tweener team & if they do a lot within the next 8 days it’ll push them forward or backwards in a big way. Until then. Who knows.

Well, none of the wins in this streak have looked like flukes. The top players (Marsh, Pasta, Tuukka, Bergy) for the most part have been on top of their game most of the season and now secondary players are stepping up too.

Plus we’re getting more out of the D now. Saw a quote from Quaider today that they are playing as five-man units, and that sums it up pretty well.

Everyone is finally healthy, too, long may that continue.

I’d be more in the ‘finally showing true potential’ camp, but it’ll be interesting to see how they respond when a loss or two comes along…

exactly on your last point. I’m waiting for that 1st loss happens to see what it looks like. Too many times this year they’ve gotten down but then quit on the game.

ditto, im more interested to see what happpens once they lose a game or two and if the bad habits start creeping in again.

Too many times this year they’ve gotten down but then quit on the game.

If there’s one thing they’ve been consistent about this season, it’s being inconsistent!

I think they can finish the road trip.

I think their ‘expected potential’ is different now.
To throw a math analogy out there, the Bruins operate at
x% of Claude technique
+
y% of Cassidy technique

Where the sum may be greater that 100% of either.
I think they will regress over time, as they lose some of the benefits of Claude’s structured system.
They will also start losing games as opponents figure out how to deal with the new version of the Bruins.

I think tonight’s game is the most challenging of the road trip. If I had to pick a loss from the schedule, tonight would be most likely. They probably win a couple immediately following the next loss, but that will be a big test.

Good call! Also, we have no Twitter, so don’t go there to find it.

DAMNIT PRICE STOP BEING SO GOOD YOU RUIN EVERYTHING!

Sometimes a play is good enough, I ain’t even mad it’s the Habs that benefited.

That Pasta picture makes me about ten kinds of happy.

I went back to work yesterday after 10 days off, had to take my phone to be repaired today and having more root canal work tomorrow morning.

But apart from that I’m doing pretty well

I’m good! Just figuring out Meiji-era Japan. And excited to actually watch hockey this evening, even if it means a super late night!

Sassafrassin’ 10:30 PM games. I wonder what the NESN ratings on these tend to be.

wow i just realized the time of the game…thats….grr. 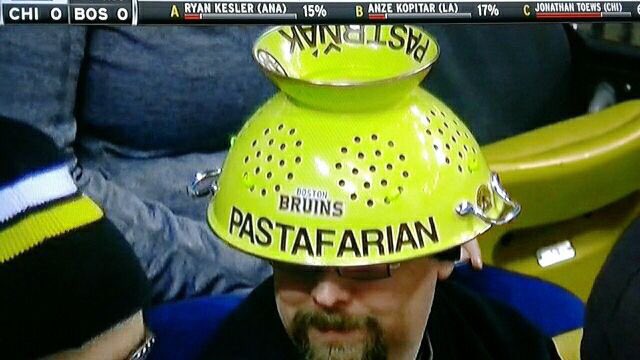 i suppose i could just visit on mobile…

I’ve driven to the correct building two days in a row!

I can remember after moving my residence, driving home from work toward the old address. Doh! That moment when you realize what’s going on!

When I changed jobs, once or twice I missed getting on the correct highway for my new job. Thanks to a perfect storm of location, that was usually a 10+ minute mistake.

Hope you hadn’t moved too far!

I once carried three bags of shopping to my old house, luckily only about qtr mile from the new place! 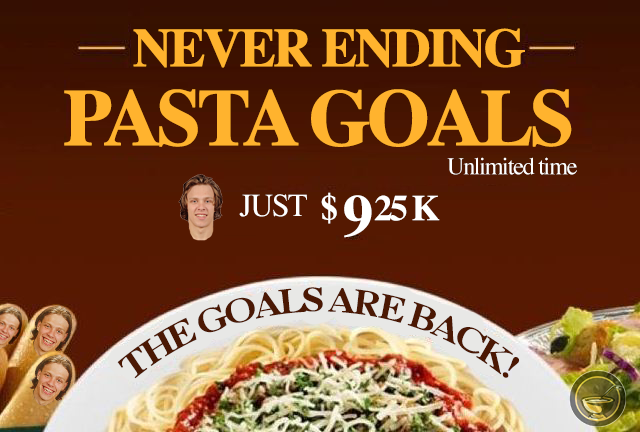 PASTA!!
I probably wont make it for tonight’s game considering last night I went to bed at 8:30ish. What’s wrong with me??

Last night the Bruins did a thing on snapchat / facebook with Vatrano & for every joke we make about hockey players having no personality, he has less. It was like listening to Ben Stein call out Bueller.

I can’t stay awake past 9:30. And my knee hurts. Getting old is dumb and stupid.

I was especially tired yesterday so I went to bed at 11.15 .

Seriously I wouldn’t sleep at all if it was optional – a horrific waste of the time I could be wasting in other ways!

I went to bed at 2:30am. I had a lot I had to do yesterday including editing BoT and finishing the 12th book of series that I decided I had to get the last 8 books all at one time from the library. One more book to go and then I have to start another Hate Read book.

My right knee has been so painful in the past week but I’ve been working it out a little more and it feels better.

^ This sets you up well for tonight’s game!!^

Indeed it does. And you get to benefit from my relative insomnia.

You can’t sleep when your family’s around?

Oh, that’s disappointing about Vatrano. Being such an exciting player I imagined he would have a similar personality.

Oh well, if he’s dull there shouldn’t be much danger of him getting into off-ice trouble…

Maybe in time he will get used to the cameras & some personality will come out, but man my wife saw it first and was like “wow, could he be more boring”

Yeah, that was my second thought – some people do just freeze up in front of a camera

Eh, I think the personality for off-ice stuff is driven out of them at a young age.

That’s pretty funny, because what I remember of Vatrano on the ice was talkative, he chirped a lot, and was pretty funny.

If only we could have him forever at $925K/year!

-We actually picked up the car last night (Given how Saturday went, that was no guarantee). Maybe my wife will let me drive it one day.
-With that, I am taking her old shitbox (’06 Elantra) and driving that sucker into the ground or until I can’t pass inspection next month, whichever comes first. It’s at 181,000 miles right now. Lets see if I can push 185k.
-I might catch a part of the first period. Maybe. If I don’t fall asleep first, that is.
-Too late for “Rivalry Night”, no?
-How is it only Wednesday? It feels later in the week.
-I need a day off.
-I need to stop rambling
-I need to actually start doing some work this morning.

Ha! I thought it was still Tuesday!

-How is it only Wednesday? It feels later in the week.

I hear you. Do you have to work Saturday again?

Am I actually coming in? Nope. Every other engineer has cashed in one freebie off and I”m taking mine this week.

Excellent. Working six days a week is fun and I love it so much.

I’m plotting to be back on the water on Thursday, Saturday and Sunday!!

No love for Friday?

No love for Friday?

What you did there, I see it. The question is, did you intend that joke?

Sadly, I was not intentionally that clever.

That joke, if it is what I think it is, has no cure and must be stopped.

On days like today, it just breaks my heart.

I really hope it’s not what I think it is, because I refuse to get down on Friday

Great news, it’s not what you think it is.

It will be gorgeous weather barring some rain. But, when you’re in the river, who cares about water falling from the sky?