You blew it, Bruins!

Bruins are now behind the Senators by four points with Ottawa still having two games in hand on them.

I could go through the game but I only saw one period myself and it’s now late and our power is out, so finding gifs is just not going to happen.

Well, except for this one (because I pulled it when I was more ambitious and we had functional electricity) that happened when it looked like the Sens would get a slashing call after Marchand stick was broken and flying through the air.

Editor
Satan 81's Sister
Spoiler
I should really get some work done at some point today.
Recch0Bag skate

Woo! Goin’ to the game tomorrow!

Sorry, I just had to get it out. The secret was killing me inside.

Morning all…woke up with both my sinuses and my throat swollen and my head feels like im hungover and i didnt even drink last night….not sure what the fuck i ate or did to cause this but im in no mood to be awake and alive today.

Uvula is being a little swollen fuck and needs to stop! MAKE IT STOP!

Missed the game last night to go on a pizza date with the wife. A new fire oven place opened up just up the street, and it’s pretty good, if a little on the expensive side.

Seems like those two points would have been nice. Get ’em next time, Bruins.

I ate a lot of veggies last night. All sorts!

And collard greens and a shit load of garlic

Spoiler
We have a spoiler tab now?!
Recch0Bag skate

Huh. Our house lost power immediately after I took the update, and I never got a chance to test it out.

My friend tweeted me this this morning and I thought there’s something true about it.

Hockey is a goth sport, it's cold, you run on knives, and usually there is blood.

I feel like I ran in my sleep last night: not so rested with very sore legs.

teams like to play in (mostly) all black too

I pointed that out. Although, I have to say the Isles’ black and white thirds are really dumb.

they are dumb. Probably top 5 in bad jerseys

They look like they forgot they had to make a jersey and threw something together at the last minute.

Get ready for the Bruins’ new alternate thirds: 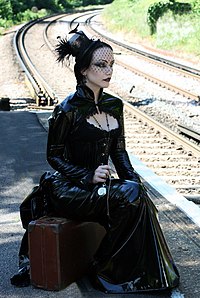 That’s a hot look but most people will complain about the lack of hemstripes.

I’m more concerned with them trying to play hockey holding both sticks and luggage.

The luggage stays at the bench. But I’m surprised the parasol isn’t here. The parasol is not optional!

It’s really bothering me that she’s not holding a parasol.

Right? Like I see it even though it’s not there.

I hate you guys.

I hate you too!

That was a hilarious episode. We got butt hurt so bad!

Hockey has too much overt emotion to be goth.

Well, The Bruins didn’t deserve to win that one in all fairness. Unfortunately the lack of passing accuracy from the Devils game continued. In fact at times it looked like Ottawa had slipped something into the Bs players drinks – all except Bergy, anyway.

On the positive side – that was the first time under Cassidy that we have looked clearly the second-best team, and they were much better in the third period – possibly having figured the key to the Sens style, so there is hope for the next two meetings. Clutching at straws maybe.

Spring has sprung here! Going for a countryside walk tomorrow which will take us past Nash College and Hayes School. Can’t find Schaller University on the map…

They needed to throw the puck deep and have bodies creating space on the forecheck. It’s too bad Hayes is barely aware that he is playing a hockey game most of the time because he’d have the size to make a difference in a game like this. Guys like Pasta and Marchy who can embarrass players one on one still can’t stick handle through a clutch of bodies. We needed a heavy duty forecheck or at least a guy to draw the defense then outlet it to a trailer. Instead we saw a whole lot of offsides and negated one man rushes.

When did we get blake wheeler back?

You are exactly right.

It was that clogging up of the neutral zone which was the Bs undoing and they wouldn’t have done that if they hadn’t got into such a strong early position.

Let’s also not understate the effect of giving up 2 goals on the first 2 shots of the game against a team that will happily play the trap for the subsequent 52 minutes.