The Bruins finally won one on Saturday night, downing the Isles 2-1 in a closely played and loosely officiated game. Intentionally Widenberg and I were lucky enough to be on hand for the game and we’ll tell you more about the Barclays Center once things slow down; we’re planning on writing about the different arenas we’ve visited in a Better Know An Arena series in the off-season. It was good to see the boys grab a win on the road. 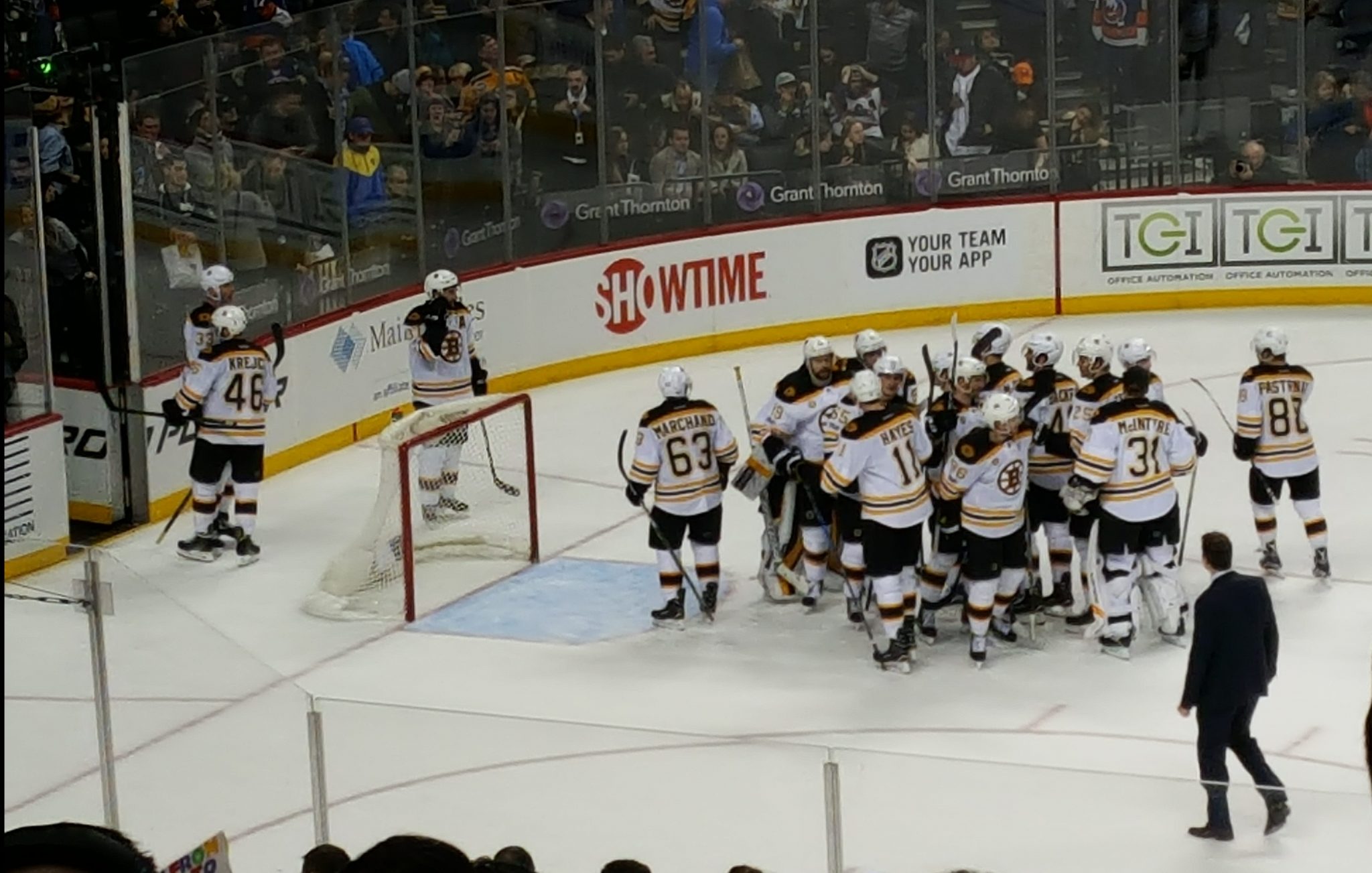 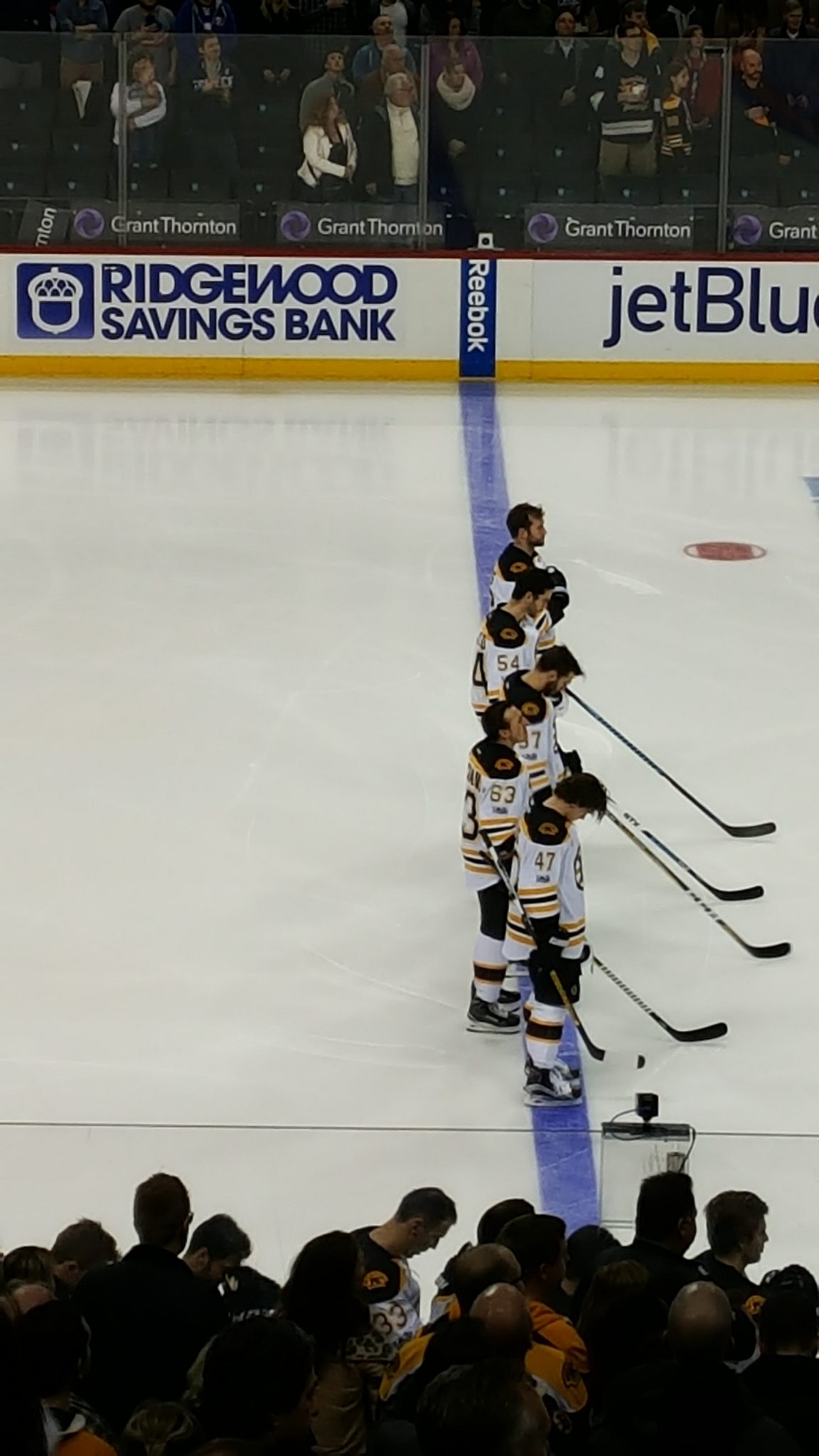 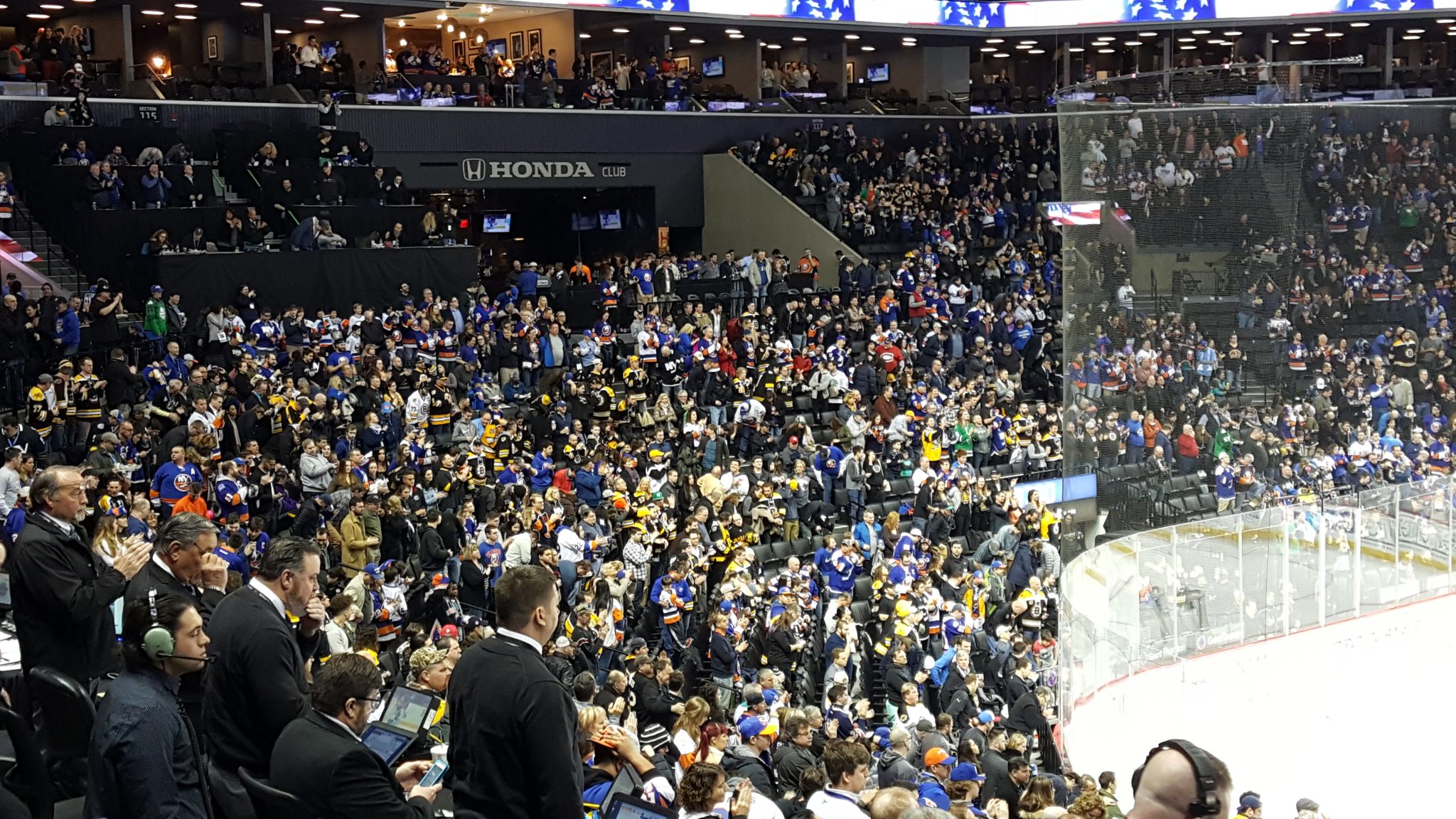 and, (3) Islanders fans do anything they can to get around the “Wait to Enter Until a Stoppage in Play” Rule. They pretty jerky about it.

(I have no picture for this)

Kids it doesn’t get any easier from here on out: the last 7 games of the Bruins’ regular season are being played over 12 days. First up, the Nashville Predators will be in town on Tuesday night (IW and I are going to that one, too!)

Stick taps to the Beleskeys!

Matt Beleskey and his wife welcomed daughter Ivy over the weekend. Congrats to the Beleskeys! pic.twitter.com/4UzPYY89Ds

As most of you know, all the Tuukka haters over the last few years have transformed me into a complete and total Rask apologist.

That said, I’m beginning to wonder. Tuukka is undoubtedly overworked, but it’s really frustrating to see him supposedly playing through injury all year and then bowing out when he’s badly needed. I just don’t get it. Like, do we move on? Do we try to move him and then go with a tandem? It could be less risky than dropping $7m into one guy. I don’t know. He’s really good, except when he isn’t. Could be said about all goaltenders though, I guess. Really tough to watch him let in totally weak ones without his view being obstructed. I just don’t know.

(apparently this is our “thinking out loud” segment of the morning skate.

Hahaha. I’ll think out loud for a second. I love Rask. I think Rask is a great goalie. One knock I do have on Rask is he, at times, seems to go into “not give a shit mode.” That Islanders goal he let in at HHG’s Birthday Game comes to mind.

Oh man, that was a bad one!

I’ll copy in what I wrote on that other site.

At least in terms of cap hit he’s the highest paid guy next to Krecji, and DK takes plenty of flak for not carrying the team in big games. I don’t see why Rask should be off limits. The bare fact is he needs to be better late when the team is getting pressured. If he can’t do that there’s no point in paying him all that and the money would be better directed towards signing star defensemen.

…Who do you replace him with?…

▼
Better defensemen and an off the shelf goalie (Sir Not Appearing in This Film?) who will seem good because the defense is better in front of him, much like all the random goaltenders who the Bruins have made look like stars over the past few seasons. Ideally we’d have both an iconic goaltender and a murderer’s row on defense but let’s face it the salary cap does not really help get there. Yeah I know. It’s a risk. But whether Rask is suffering because he’s mentally fragile or physically beat down, his pay grade is not helping the team get the pieces that would resolve the underlying problem of cack defense.

▼
And unfortunately I think to fix the defense some elements (Rask’s big-ass salary being something to consider) are going to need sacrifice. Something is going to have to give, and shuffling the third and fourth lines for yet another season is not going to make it happen. So I don’t advocate moving Rask because he’s so terrible, but he’s not helping in the highest pressure situations and may be a necessary sacrifice… much like a recently fired coach.

So what I’m saying is if the old men upstairs want to show some cojones, a good place to start would be shopping Tuukka.

I don’t think his poor play is completely his fault – lord knows the defense went from fantastic to unreliable in two, three years, but he still has to step up and keep playing his game. Last year I was willing to say, “Hey, the guy is sick, and it shouldn’t have come down to this one game”, but I’m done making that argument. Put up or shut up, Tuuks.

I don’t think his poor play is completely his fault – lord knows the defense went from fantastic to unreliable in two, three years, but he still has to step up and keep playing his game.

Thinking out loud some more: We’ve talked about the Bruins playing down to their opponents. I think Tuukka does the same with the D in front of him. When the D is good, Tuukka gives a shit. When the D craps the bed is seems like he decides to give up as well.

Everything has been needlessly difficult this morning, I feel ya.

And that brings me to a further point: You can’t expect your goaltender to rise above your defense all the time, but you should be able to expect him to have the ability to play at the top of his game even on nights when teammates aren’t. Sometimes it’s a valid excuse, but not all the time.

Absolutely agree. It’s why you got the big contract.

What i dont get is how he can stand on his head for an entire period and then let in a shot from beyond the circles with no screen or tip…. i really dont get it.

At least he doesn’t play drunk.

I mean, he wouldn’t care if he shit himself. You are on to something

And, if he gave norovirus or whatever to a team within the division…. WIN

Yay hell week. Covering at job two all week 5:30-9 then have to go work my actual job. Just going to be mainlining caffeine all week. At the office and my monitor won’t turn on. And yes it’s plugged in!

We haven’t mentioned McAvoy and JFK yet. Exams are this week, so we might be waiting a few extra days.

I take it both are young enough to avoid having to slip a year of their ELCs?

Then why burn JFK’s year? Seems foolish to me unless you expect absolute stardom

Perhaps they only do it if they think they’re making the playoffs, OR if they want him to play in Providence’s playoffs.

I wouldnt bother with either honestly unless you knew you were already 100% going to the playoffs and players need rest to recoup nagging injuries. I would guess building line chemistry and riding any form of momentum together if they start another win streak.

I don’t know. From everything I’m hearing, the signings are a foregone conclusion.

You could sign JFK to an ATO in PVD to get a couple of games in that way. McAvoy can play 9 games before he burns his first year. I doubt he’d play that many tbh

Superb pics, GH. Looks like you had a great view.

Had a top weekend. Both Mrs Bear and I have to work weekend days, so we rarely have time together, but we managed to get an all-too-rare family Saturday and it was fantastic.

Entertaining as the Isles game was, can’t help feeling the Bs got a little lucky. We were due some after recent games, but still. They need to be better and a LOT more disciplined down the stretch.

Been in London, guitar shopping this morning. I’ll be 40 this year and I want to treat myself to a 12-string electric guitar.

Tried a top-of-range one that was way out of my price range, but just to see what it was like. Then in a different shop I tried out a 50-year-old relic of a thing for a third the price that actually sounded rather better! Go figure. I’ll keep looking.

Mornings all, I am currently at home as the maintenance tech for my oil equip is giving me my yearly checkup. I suppose you could say im getting my pipes cleaned. I was gonna work at home till noon but stupid me forgot my RSA token soooooo i cant logon to the network. Looks like its going to be a late night at work.

I suppose you could say im getting my pipes cleaned

well…if you are into 60 year old males then boy do i have a service teach for you!

B2B has resulted in me googling a lot of random stuff. I am not, however, going to google “Elderly Male Stripper” gifs.

I’m glad I could bring the San Diego Chicken back into your life.
http://stream1.gifsoup.com/view/170185/san-diego-chicken-vs-barney-o.gif
http://imgur.com/WpZd3Y8.gif

You made my weekend.

Schwartz was impressed with the size of that bird!!

who knew Barney could breakdance…

Looks great if the boss checks your History!

well…if you are into 60 year old males then boy do i have a service teach for you!

Do not give Jo any of this dude’s info!!!

not to mention obligatory Beevis and Butthead comment. heh heh!

(3) Islanders fans do anything they can to get around the “Wait to Enter Until a Stoppage in Play” Rule. They pretty jerky about it.

Thats what i found weird about the paint bucket in Pitts….they dont have the rule. Then again there are no real gates in the PPG….its all on the top floor and you just walk down to your seat. I was annoyed about it though because the guys to our left were trying to get plastered so we had to stand up almost every 10 min to let them out/in for new beers.

My Spring League hockey team won last night! We won despite our goalie being so drunk he needed help getting up after making diving save.

That’s hilarious! Nothing funnier than a drunk goalie. I know, I’ve been one!

This team has been fun. They are all firefighters. My brother and I provide the sanity, which is not good news.

In our first game, we lost 5-1 and one guy got so mad, he slammed his skates and ruined his runners. In our second scheduled game, the ice melted. In our second game played, there was a drop the gloves fight.

Goood Morning, pals!!
Yay! The Bs won a game!!1!
Thanks for representin’, GH and IW!!
Tip o the cap to LB and the Tumblin’ Muffins! The Striped Mofos will be disc golfing early (and playing Miss Muse in consolation).
MOAR COFFEE!!!! LESS MONDAY!!!

Wait a minute, it IS baseball season. Spring training’s been going on for weeks and Opening Day is a week away!

ewww hope you are wearing your mud boots….its been raining here all day so far and all weekend…calls for mud slingin!

When I saw the Anaheim score this morning I thought the Muffins must be toast!

You never know. I rode Peter Budaj for four months. I still think LA screwed themselves and the Striped Mofos! That’s my story and I’m sticking to it!!!
Your team is HOT right now!!!