Bruins GM Don Sweeney announced that Charlie McAvoy has signed with the Bruins and will practice the next couple of days and play in Providence. He also answered questions about other Bruins prospects like Jakob Forsbacka-Karlsson and Anders Bjork.

"This is a good first step for us, for everybody."

Watch as Don Sweeney announces that Charlie McAvoy will join @AHLBruins on an ATO: pic.twitter.com/OcGPH9MM0Z

My new favorite dumb narrative that I just made up myself: 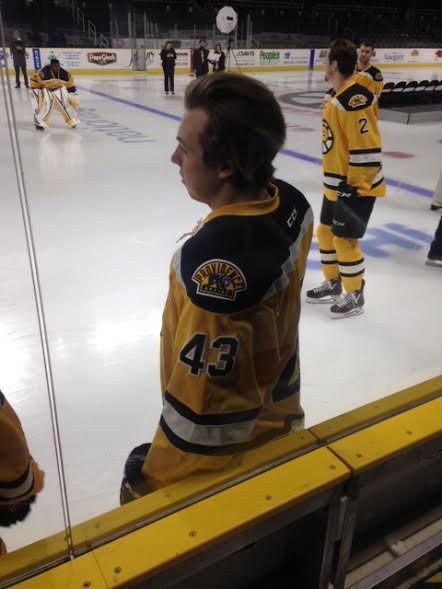 Vatrano is day to day and will not play tonight. Beleskey is in for him

Game day previews should have:

Whatever happened to Morrow? Has he been put on permanent nacho-duty?

Oh wow. I completely forgot about him.

Between the two, I think I’d rather Beleskey. If Vatrano isn’t scoring goals, he’s not doing anything else, either.

One week and one day away from the start of my spring break. Who wants to get wild with me in Madison, WI!

Good Morning, pals!!!
Kayak polo was awesome once again!
Looks like it’s time to quit reffing. I’ve been avoiding the reality, but the handwriting is on the wall (and what is it trying to say?). I don’t want to quit, but the knee is making a case for retirement.
I’ll be hitting the Farmington River this afternoon, with some buddies – yay!!
Moar coffee in the mean time (which is a groovy time!).

Oh, that’d be a damn shame. Give it plenty of rest this summer and see if it improves

No Stripes! The rink needs you!

Nooooooooo! Go to the doctor! They will fix you right up, you’ll feel like a million bucks!

but the handwriting is on the wall (and what is it trying to say?)

I don’t want to quit, but the knee is making a case for retirement.

You need to go and tell the weather that it’s been spring for ten days already!

Now, THAT’S a leaked video NO ONE wants to see. Doesn’t matter if it’s the hockey player or the ex-Sugarcubes singer! #B2BAfterDark

At back of plane on window? Board last!

Carry on the standard size with extender zipper? Better tighten it down or you’ll have to gate check. Unzipped bag fits with over 3 inches clearance.

I thought it was common practice that you boarded the plane back to front? Isn’t that the easiest??

You would think so, but not always the case. WTF?

That’s why I like JetBlue. They board from the back & they start asking for volunteers to gate check before boarding if the plane is full.

At back of plane on window? Board last!

And then comes the inevitable announcement: “The overhead bins are full. All remaining passengers will have to gate check their bags.”
Yes, I’m still a little bitter.

Yes, Utah. He disagrees with the Mormons’ stance on drinking.