The regular season games have all been played. The final seeding has been set. Even though they lost their final two games of the season, the Bruins lucked out.

Last night Columbus did us a solid by defeating Toronto; now the Bruins have the third seed in the Atlantic. The road is still a tough one as the opponent is now the second-seeded Ottawa Senators and thankfully not the Washington Capitals. Still, Boston was 0-4 against the Tootsies this season.

Thank you Angry Fonzie and the Blue Jackets crew!

With that, it’s time to focus on serious playoff business. Late last night, the NHL released the first round schedule for all teams. Here’s a screenshot for the Bruins-Senators series. 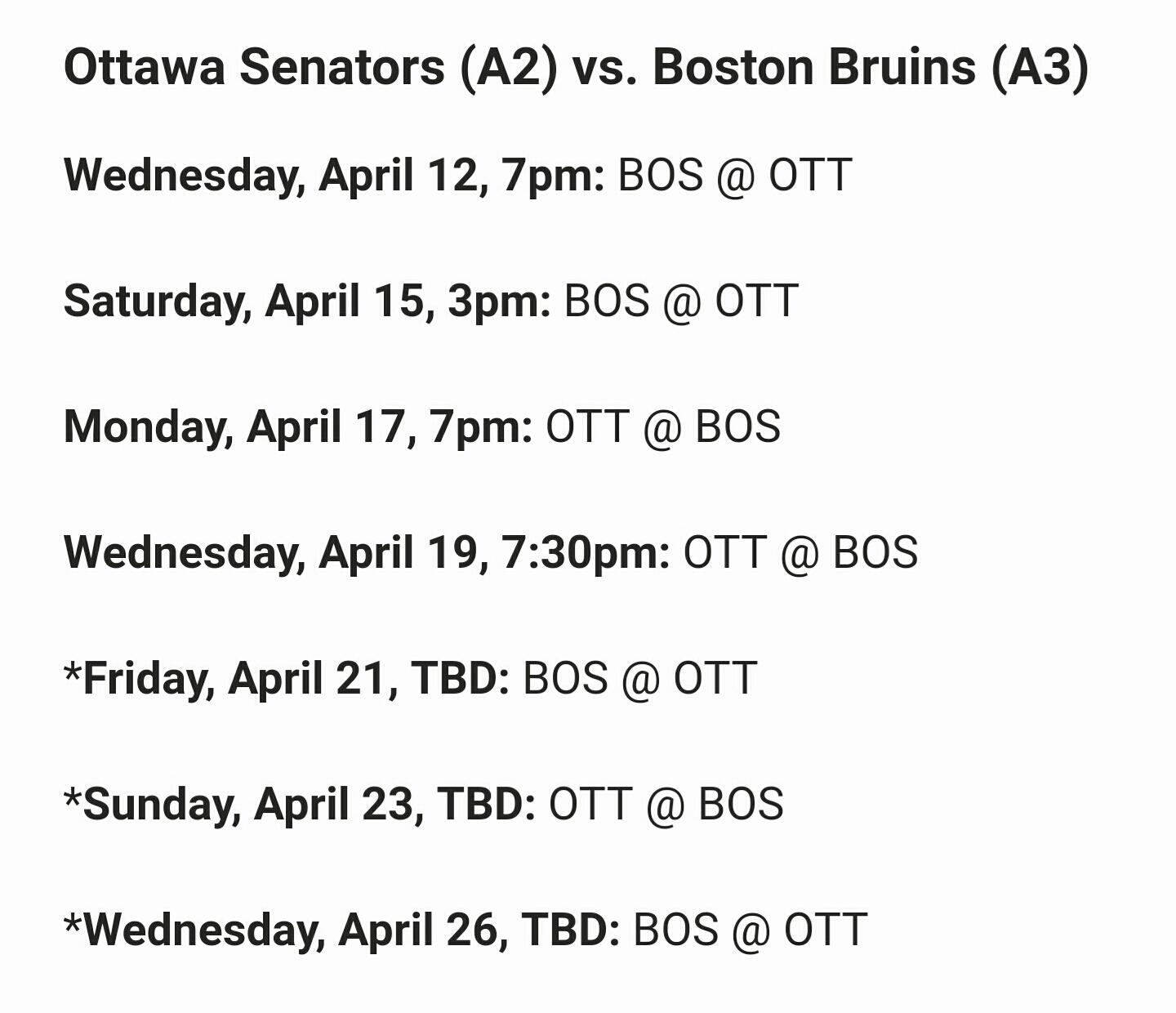 Below is the current Stanley Cup playoff bracket according to the official NHL Website. 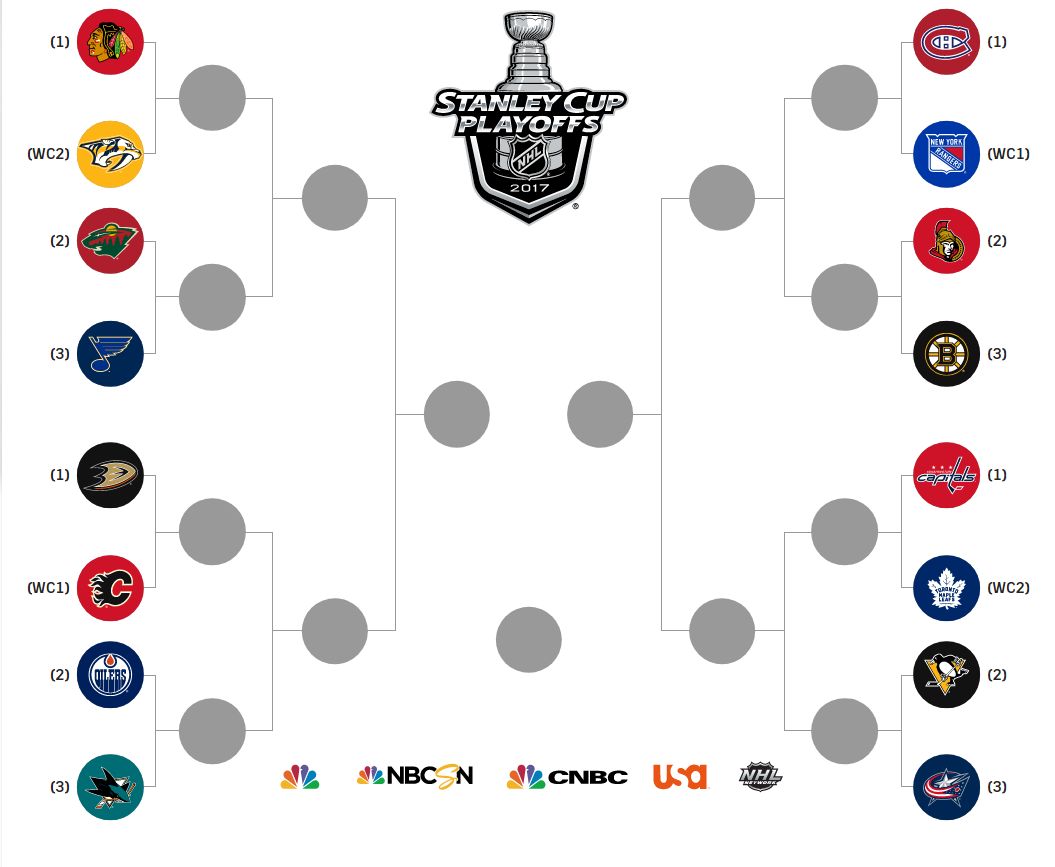 I have created two leagues, a private league for Bobby to Bergy (password Brand0Carlriss1an) and a public one for members and listeners of Bearly on Topic (no password). Join both or either. Brackets should be available to fill out starting today and must be completed and saved by Wednesday April 12th at 6:59pm ET. I emphasized saved because last year it was not intuitive. If you have issues, let me know and I’ll try to help you out.

Heading for the Farmington River. Going to get it all ready and Jo will join me after work. Yay!~!

You going to the Tariffville Gorge? dont get yourself killed!

Hey, does this mean playoff Krejci is going to turn up? I’ve missed that guy!

Playoff Krejci, now that’s a name I haven’t heard from in a long while

hey all, stopping by briefly….any updates on Carlo and Krug?

Both day-to-day. Haggs says Krug has a knee injury and Carlo has a concussion. Haven’t found another source to corroborate.

Sweeney said Krug probably out for game one. Carlo definitely out.

I think McAvoy-Liles is a super weird pairing. Why not put McAvoy with Chara instead?

Chiller and Killer is a pair I actually like. I can’t believe I said that.

What do you guys think of Edmonton’s chances? Can they even remember how to play playoff hockey out there?!

They missed out by 17 points last year.

I actually think they’ll do well. McDavid will show us that he’s got a whole ‘nother level, and Looch is going to turn it on like he can from time to time. I feel it, and I will be surprised if they don’t win a couple rounds.

Wow, Rowe is out in Florida.

They should have signed Clode, when the opportunity arose.

That’s what I thought.

The greatest sportswriter there ever was says knee injury for Krug, concussion for Carlo, both day-to-day. Is there another source for this?

I’ve seen nothing more for either. I did see something that said clavicle/ shoulder injury for Carlo but can’t be sure of that.

I wouldn’t mind seeing something like this again.
http://i54.tinypic.com/soy1l2.jpg

I saw it in person, and my brother-in-law and I were beside ourselves. Nobody in the entire section could believe it.

Dobby has died of Dysentary.
http://www.jimbo.info/wp/wp-content/uploads/2012/09/dysentery.gif

Maybe someone gave him a sock and he became a free agent Dobby.

What the fuck? Have the Bruins been hanging out with the Red Sox?

Ask and ye shall receiveth:

How did he look, GH?

Charlie looked good in Providence – comfortable. Let’s take him out of his comfort zone.

Nrrrrrgggh…I’m not thrilled about this. I’d rather they keep him longer for cheaper. We made the playoffs, we know we’re not getting far. Why rush this?

Well… we can beat the Sens. And otherwise our D looks like:
Z-McQuaid
Liles-Miller
Morrow-Other Miller.

Is it really worth it to burn a year of McAvoy’s ELC just to try to win a round?

Oh, is there something in the CBA where we’d lose this year of his ELC anyway? Like a turning a certain age before a certain date thing?

he wont play 40 games so it wont push him a year closer to UFA status (from various bits of twitter i’ve seen, no hard source on it)

Take it as you will (big ‘ole grain of salt to be sure) a lot of the number-y prognosticator’s like the Bruins if they clear the 1st round. Rags or Habs aren’t a hard target in the 2nd round either.

Yeah. I could go either way on it, myself.

Guys, if you haven’t figured out by now, I am a fucking magical item. I will things into existence! I have been a god luck charm and an oracle of some kind.