(Seriously, it’s been a slow Bruins news day and until breakup day, we won’t have anything new.)

Let’s talk about the Bracket Challenge! 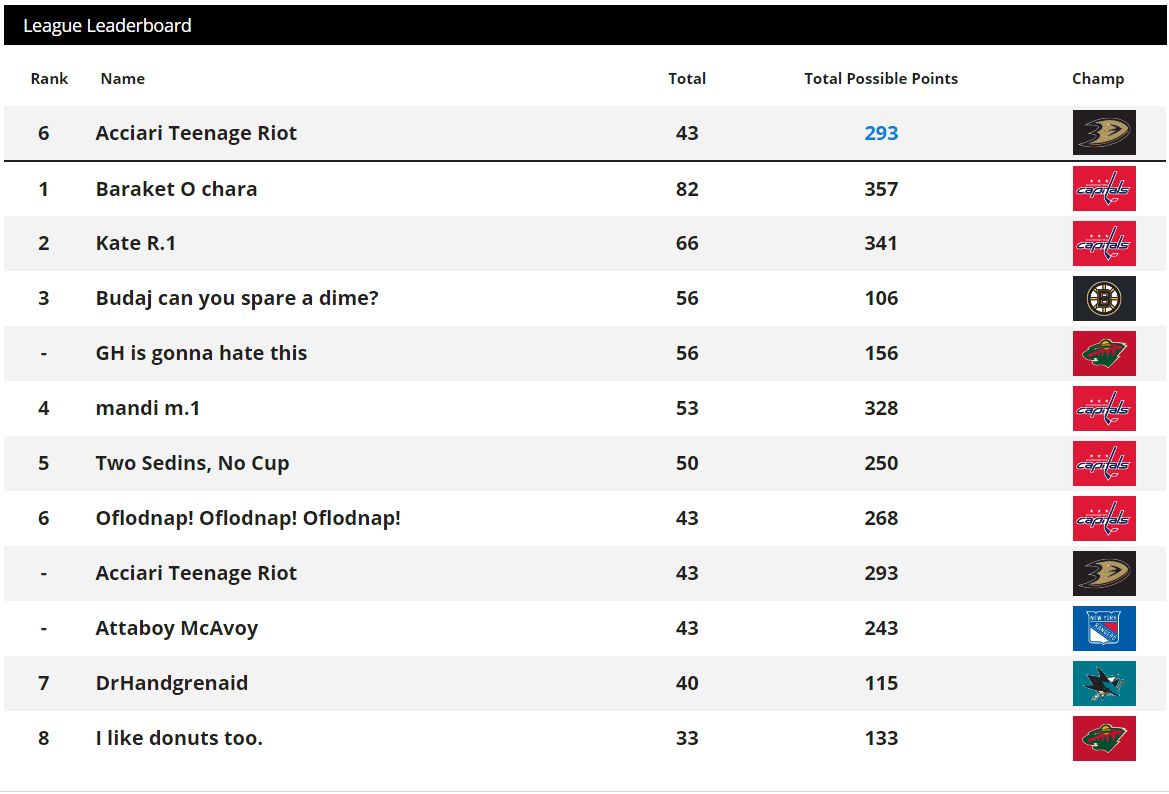 After one round, our current leader is TheTallest81 with 82 points, which is pretty impressive. He only missed one series prediction.

Muse is Second, Stripes is in a third place tie with CB18, followed by Phony. Admittedly, I’m not sure which bracket belongs to whom but I will admit that I’m sitting in sixth place after a disaster of a first round.

So, let’s have some trash talk in good fun.

Heading to the dealer with Mac’s (Jo’s mom) car for a recall. Bringing a book and I have the afternoon off!!!

You should read From Hell to Iowa. My great uncle wrote it about his family’s escape from communist Albania.

I think I need to read this

Nice! Waiting around isn’t bad if you have something good to read.

So when the Sweens sign Cassidy to a head coaching contract?

I’m in last place for the bracket challenge

i would really like this headache to go away please

Bergevin keeps saying he won’t trade Carey Price. So, when will he?

But it was worth it to see the look on Toews’ face when they lost.

I could never get the bracket to work on NHL.com but I do like everyone picked the Caps. I hope Ovi finally gets his ring

Yeah, I’m hoping for a Caps-Predleys final. That way either Ovie finally wins one or we get to enjoy an XL-sized serving of Habenfreude.

we get to enjoy an XL-sized serving of Habenfreude

Ooh I hadn’t thought of it that way! Go Preds!

The Blues are my preference to win, but it’s not realistic, so Preds, I guess.

Again I say, GH, you’re welcome. I sacrificed my bracket to save you from more Wild playoff hockey. But seriously I didn’t think Jake Allen had that in him to steal the series like that, nor do I trust anyone in the west to do anything.

I think I might be the only person awake this morning. As here & twitter plus real life everyone is talking about being exhausted.

Since my bracket is 100% busted, I think the Preds will win this one in 6, and if the Oilers can go 1-1 on the road, they’ll win in 7 for the west. While the Rangers I think will have more fits with the Sens than we’re giving them discredit for, winning in 6 & the Penguins squeaking out a 6 game win over the capitals (God do I want to be wrong)

So, this was you?

Thank you. Wild hockey never needs to be seen by anyone other than the masochists who like that sadness that passes for hockey. That series last year made me want to quit hockey. Thankfully, the Preds became a revelation and I have enjoyed them ever since.

I heard something about how Jake Allen was working closely with Marty Brodeur, who we know is in the front office in Bluesville, so maybe that can affect his game in a positive manner.

Maybe, but holy shit can I just talk about the frame rate of that gif. My god it’s beautiful

It’s also a fantastical kick save.

Thank you. I wish I could take credit for it but really I just found it. I do want to learn to make gifs, though.

Jake Allen’s wife had a baby early this year. His game went to hell for awhile (killing my fantasy team a little). He’s baaaaaack!