Yesterday, I learned a new term on Hockey Twitter™: Ratio City. Ratio City is the ratio of replies to the likes/ and or retweets. If the number is high, it means the tweet is a bad one. Somehow, I could have lived without this knowledge but it’s been a slow news week for the hockeys that I care about and this is what happens.

Anyway, Ratio City was being bandied about by the major pot stirrers on the Twitter machine, bringing my attention to this particularly crappy article. I would have embedded it but the article was tweeted multiple times and it didn’t show the proper number of responses. 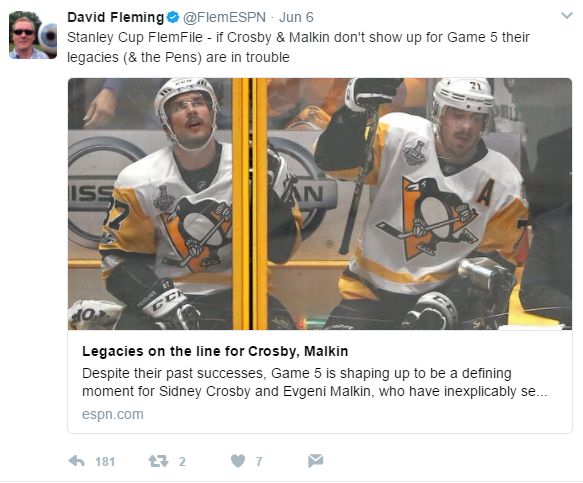 The ratio is high meaning Hockey Twitter disapproved of it. It’s no wonder- it is an article written by a non-hockey writer for ESPN, the same company that fired their whole department of NHL writers. The writer, David Fleming boasts of writing so many cover stories for the ESPN rag and has a column called “The FlemFile”, which sounds kind of disgusting to me. 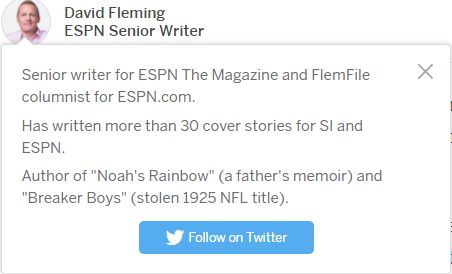 Anyway, here is the shitty article. I read it so you don’t have to. Basically, it starts off depicting the Penguins as living in the world of Sue Heck, surrounded by myriad bland motivational posters:

Scotch-taped over every inch of available wall space above lockers, on the bathroom walls and even in the hallway leading to the ice, was a greatest-hits collection of every sports motivational platitude known to man. They have put up the posters now for a few years, but this time unfortunately it ended up transforming the dressing room of the once-fierce defending Stanley Cup champions into something resembling a junior-high camp counselor’s office.

The temporary display included such hits as: Attention to Detail. Just Play. Hunt. Own it! And even the all-time work retreat classic — TEAM: Together. Everyone. Achieves. More.

The decorations were an odd and seemingly desperate gesture for a team trying to get its collective mind right before the series slipped away. Yet, as far as I could tell, the only cliché the Penguins didn’t have on display was the one message superstars Sidney Crosby and Evgeni Malkin needed most.

He then continues to emphasize how Crosby and Malkin, you know the only two players on the team, have failed at scoring, but also at their legacies. Blah, blah, blah. Sure, they having been putting up the numbers and Crosby has been being handled by PK Subban, who I heard was actually good at hockey. He rounds out the article by comparing Crosby (2 goals in his last 20 SCF) to Wayne Gretzky in his 1985 SCF. It’s just sloppy work comparing generational talents between two time spans in which the game couldn’t be more different.

This kind of lazy writing is what you get when you fire everyone with specific expertise. I hate that I gave it a click, that I read it, and that I exposed it to you. But, if it gives me the ability to use gifs from The Middle, I’ll take it.

In other news: Ulf Samuelsson has made the move to the Chicago Blackhawks coaching ranks, as if you needed more fuel for your burning hatred of the Blackhawks.

I might be regretting taking summer classes. I want a summer vacation, dammit! I want to jump in a lake whenever I want.

Morning all. Last day of work for the week then going to Montreal tomorrow! Much excite!

Have fun in Montreal!

ALL THE POUTINE IS MINE!

I’ve never had poutine there because it used to gross me out.

My first thought was “Oh, you might make it in time for first practice – it doesn’t start until 3pm (Time difference, what time difference?!)

It’s a shame the engines don’t make your ears hurt for a week anymore (or maybe that’s not everyone’s bag).

Hopefully you and CB18 will get to enjoy some Habs-denfreude first-hand!

Ha! Maybe one of us should start crying so we can meet our favorite driver.

Make sure to wear your Subban Preds jersey!!!!

CB and I are going to go throw rocks at the Bell Center.

Hey Pals!
Nice after work paddle on the Farmington River last night. Took Jo for Mexican after.
Twitter has never interested me one little bit.
Ulfie and the Hawks deserve each other. Fuck them.
Looks like a great day to mow.
Game 5 – crucial game! Go, Preds, Go!

Believe it or not, there are aspects of Twitter that can be fun. For instance, there are several of us here who have great fun together there. However, there are things like Hockey Twitter, which is a huge, negative echo chamber at times.

Oh God, so true. The thing that makes me want to not like hockey is that most of the fans I hear from are insufferable jerks who think that tweeting means they’re doing something.

For me personally, as a sport journalist who doesn’t actually go the events, it’s of great value to have somewhere to interact with people who actually are there.

And, as VA says, it can be fun too

Twitter certainly brings out the worst in people, myself included. And there are times when I just have to ignore it, especially Hockey Twitter. I don’t want to be the gal who tells people to “just stick to sports”, but honestly, I have no interest in the opinions of hockey writers on so many things. I am an adult so I just roll my eyes as I scroll by instead of writing the stupid incendiary comment. There have been people that I have just unfollowed and/ or muted because the stupid stuff outweighs their usefulness.

Just hang in there, baby!

Though, it turns out that “just hanging in there” is terribly uncomfortable