Earlier this year, the NHL announced that Adidas would take over jersey manufacturing from Reebok starting in the 2017-18 season. This news sparked a lot of conversation among hockey fans because it each team would only be allowed to have two sweaters, one home and the other away, with the alternate or thirds being abandoned for at least a season. Three weeks ago, reports were that 12 teams would be getting uniform changes that could range from minor tweaks to major logo and design overhauls. Pete Blackburn compiled all of the uniform glimpses that Adidas teased in the “Form the Future” campaign on Twitter yesterday.

For those in the know, this is just moving the jersey from one part of the company to another as Adidas owns Reebok. Honestly, it looks like Adidas has decided to have Reebok focus on other products outside of uniforms judging from the changes in the big four American sports.

Adidas showcased their work during the World Cup of Hockey. The uniforms were designed with special moisture-wicking mesh to regulate body temperatures more easily. No word on whether or not the famous three stripes will be incorporated or if they also control moisture and heat.

So how do the Bruins fit into this? Boston is one of the teams with at least minor design fixes. So what do we know?

Four days ago, a picture was released of part of the front design.

Yesterday, the logo and part of the nameplate were released. As you can see, it looks like the gold yoke is still in place and the material is different. The nameplate is different; the black “double stroke” of the lettering is missing, making it look more similar to that which was on the Men In Black uniform. 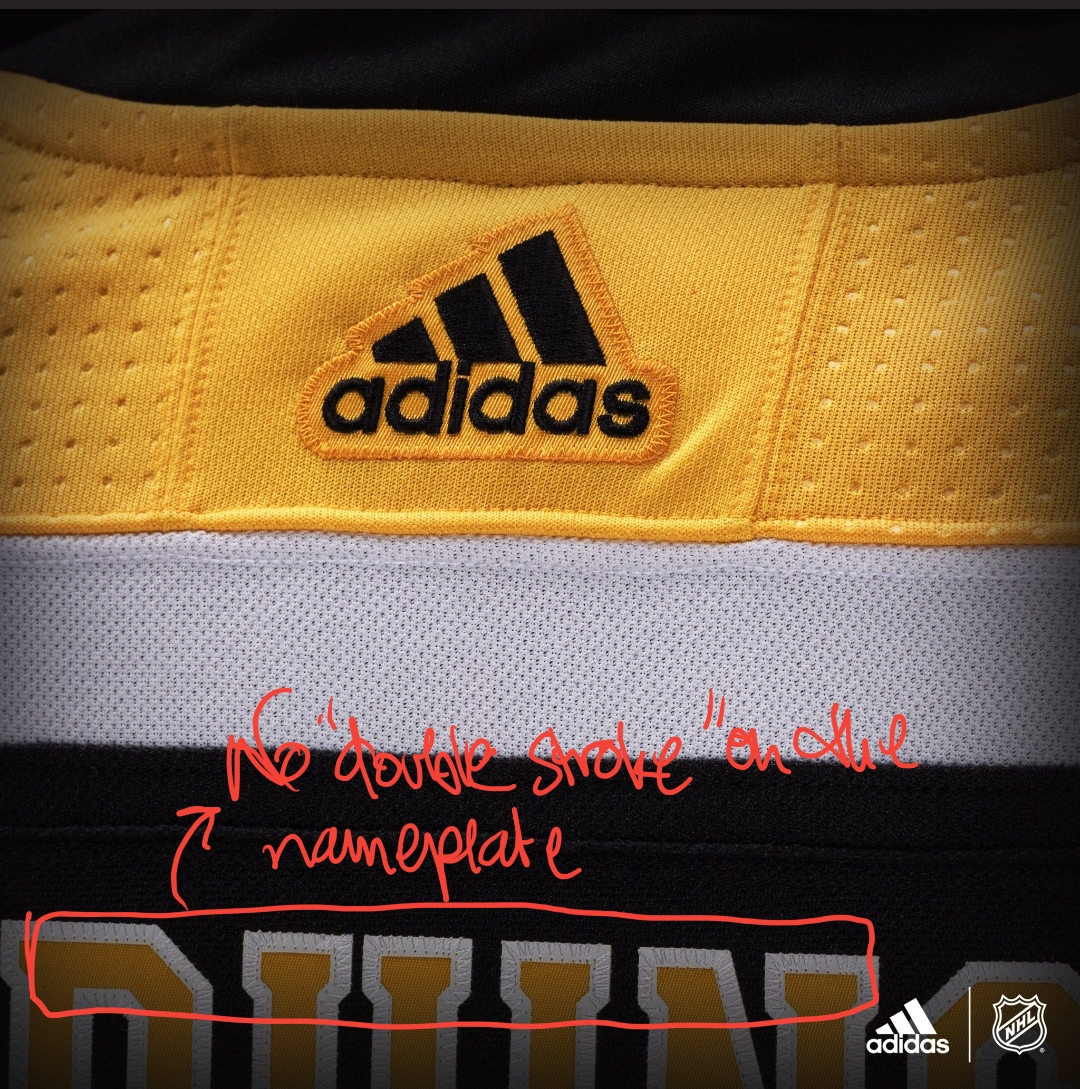 There isn’t a clear enough picure of the lettering to determine if the font is different or not. I might have to consult a font specialist.

Truthfully, we don’t know much.

The new uniform designs will be released on Tuesday, a day before the NHL Awards.

PLEASE GO TO MONTREAL! PUT THEM IN CAP TROUBLE!

That would be good to see, but my money’s on EDM. Chiarelli loves him some aging players on excessive contracts with NMCs.

He does ut a girl can dream, can’t she?

I’m excited about trades and free agency. Those are my jams.

I’m also not shocked that they would trade for a cry baby.

I would be pretty okay with moving our first for a d-man.

As long as it’s not just any D-man, but actually a quality one.

I’ve been in a terrible sleeping pattern the past couple of weeks in which I stay up way too late and I sleep later than I want to but never enough.

The Foxborough Summer League rosters finally came out and there are some exciting names there including one Charlie McAvoy.

This is my favorite article on fonts, typography and semiotics ever:

I often struggle to see beauty in inanimate objects – I’m more of a “functionality over form” kinda guy. As long as they don’t look really horrendous, I’m easy.

Working from home again today, this time because I simply couldn’t be bothered to go into the office. That’s not what I told the boss, of course ;-). I appreciate how lucky I am to be able to do that – must try not to take advantage.

Going to meet up with some old schoolmates tomorrow. We had a get together a little over a year ago, but since then three of them have had babies! So that should be fun.

Anyone watched the new series of House of Cards? I’m on ep 11. The last series was criticised for being far-fetched. True events since then have kinda expanded the boundaries of what is considered far-fetched, though…

Anyone got any fun plans for the weekend?

…I’m more of a “functionality over form” kinda guy. As long as they don’t look really horrendous, I’m easy.

Pretty much the same. I will say that certain colour combinations make me want to claw out my eyes, like those of the Avs jerseys. I loved the Oilers new homes however that new one’s blue is off. Whenever we talk i about it on the podcast, the guys go off on yokes, hemstripes, piping, etc and I just want to punch them all out because I know they never take such consideration when choosing their own wardrobe. I demand that they tell me about their hemstripes on all their clothes now.

Basically, I don’t care until someone makes me care and I’m mad that they do.

on the podcast, the guys go off on yokes, hemstripes, piping, etc and I just want to punch them all out

My workmates are prone to banging on about soccer kits in a similar way. Not for me!

I once asked if they would be up for a bit of ruching. It didn’t slay as much as I wanted it to.

Anyone watched the new series of House of Cards? I’m on ep 11. The last series was criticised for being far-fetched. True events since then have kinda expanded the boundaries of what is considered far-fetched, though…

Just finished it last night. I thought this season moved pretty slowly. I also found Frank’s rhetoric & policies to be increasingly GOP-esque, considering that he’s supposed to be a Democrat. It seems like they were trying to twist him into increasingly Trump-y contortions in an attempt to one-up reality.

Hey Pals!
Jerseys don’t excite me all that much.
Since I have done “D” league only since getting back on the ice, it makes PERFECT sense to put me on two “A” league playoff games last night, alone. First game was a giant pain in my ass. When the bitching started, I went over to the benches and said “Hey guys, I got fucked tonight, so there’s a good chance some of you will get fucked, too. And to be honest, I don’t care. Also, the harder I have to work, the bigger an asshole I will become.” I had to be a really big one. Second game a bunch of guys came to the box during warm ups to say hi, ask where I’ve been (injured) and why I was alone. Some guys said “c’mon, let’s have some fun.” and we did! They saved the evening, I got a good skate in, and the players were awesome.
Today I am le tired.
Moar sleep!

Glad the second team was awesome. Fuck that first team!

Ditto to that! Those guys sound awesome.

Game 1 – player A1 is holding player B1. My hand is up, but the non offending team has possession so it’s a delayed penalty. I tell B1 ” i got it”, but B1 is now pissed off and smacks A1. I blow the whistle and send both players to the box. B1 says ” you should have blown the whistle sooner”. Me – “why don’t you blow me, then I’ll blow the whistle. Oh, and fuck you, you fucking moron.” That’s how game1 was.

Me – “why don’t you blow me, then I’ll blow the whistle. Oh, and fuck you, you fucking moron.”

The game may have sucked, but this is hysterical.

I want to say this to someone, but no part of my life requires a whistle.

You can start wearing a whistle. It’s just that easy.

That’s genius – cos if you DO start wearing a whistle, EVERYONE will ask you to blow it!

What was it that Lao Tzu said? The journey of a thousand blows stars with a single whistle.

Jo-ann was running the clock and had to listen to all this. So the guy goes in the box and tells her to shut the door. She told him to perform an anatomical impossibility!

Other players WERE amused.

Why does this not surprise me

Oh, the Finns love them some metal!
Relatively few in UK. I think metal is seen as kinda dated over here.
Major nitpick, but it would have more context if the total number of bands (regardless of genre) per 1m people was known.
Where would the US rank, d’you think?

Ah, so the Canadians are a bit more into it. Great graphic!

It’s one of the lessons they learned from trying to infiltrate the Afghan death-metal scene.

Who knew Greece was a hot bed of metal?

Austerity and the fact that retirement age is practically 25.

Should we just move to Finland? We could have reindeer, saunas, and metal. What more do we need? If it helps, we can put extra vowels in our names and a couple of additional consonants. You’ve already got the double “n”s. I could use an extra “z”.

Poor Kosovo! It looks like they have to metal bands at all. Just a big “N/A” where a number should be!