Well, the NHL Network has done it again. With a stable of former beat writers, the NHL has amassed quite a collection of talent, content creators, and judges of hockey talent. Yet they create content like this:

It is blink and you miss material like this that makes it hard to take a list like this seriously. Several players flit by on the screen for 1-2 seconds and go nameless. Seriously, you expect me to recognise that blur as Mark Schiefele? Like I know all the Winnipeg Jets by heart.

I’ll save you some time and just show you their list.

Now, I ask, is Patrice “They’ll Name the Selke After Me Someday” Bergeron in the right place on this list or is he criminally devalued? The rankings on this list are obviously biased toward scoring more than the other skillsets that a centerman should possess because that is (probably) more exciting to (casual) fans than backchecking. But 11th? I just feel like the player that most of these players, especially the Team Canada players, would call the best center in the game would rank higher.

Why do you do this to us NHL Network? Are you that starved for attention?

Gang of Four on the box, welding helmet on head, crackin’ open a Dirty Mayor and watching the eclipse!

BTW, I am a mike rupp fan. He played for the Danbury Thrashers in the UHL during the 04-05 lockout. Only 14 games, but it was fun.

Trashers! That’s a jersey I really regret not getting. Alas, they were run by the mob and got busted. 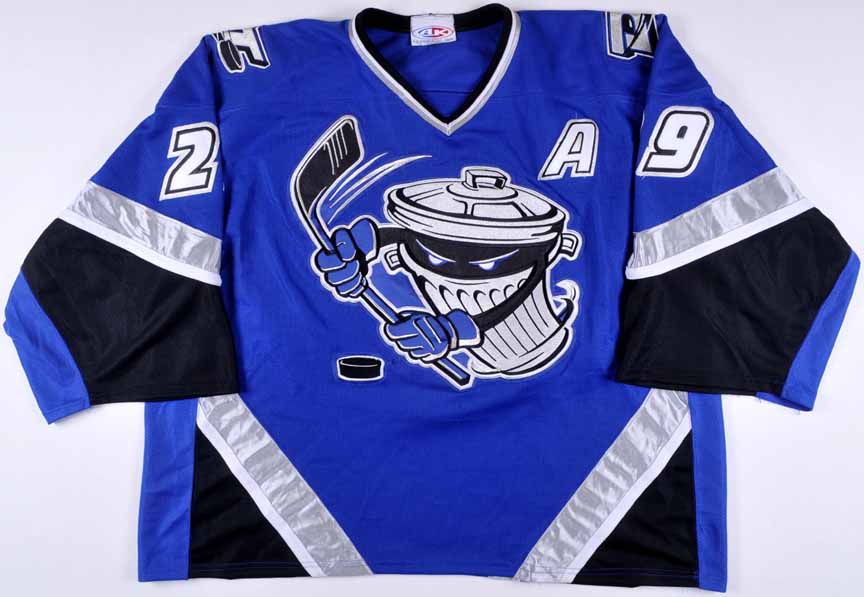 I have some Trasher tee shirts and pucks. I’ll look around the rink and see if there’s is anything worthwhile. I’m pretty sure there’s a UHL championship banner somewhere.

Their owner now lives in a big house with a yard and a fence around it.

Malkin at #3 feels way wrong. I know his PPG was great last year, but I also remember how easily he has been neutralized by the Bruins in the past. And his face-off percentage is abysmal.

Plus, Malkin is too ugly to be in the top ten of anything except an ugly contest.

So what album-that-we-probably-should-have-listened-to-by-now should we listen to?

Maybe Entertainment! by Gang of Four?

Digging it so far! The lyrics are great!

Couldn’t give it a proper listen since the people next door are in their office so I have to keep the volume down.

The Stone Roses Greatest Hits. Very influential in the Manchester sound of the late 80s.

Their debut album was HUGE on college campusses in the US in the early 90’s.

Why for the love of god why is Haggs writing about how the Bruins can only choose not to trade PAsta? This was settled last week. Also, I saw a headline that CSN Philly is pushing opining that the Flyers should try to trade for him.

Got it, CSN is just evil.

It’s August and it’s the only thing left to talk about. So they’re gonna talk about it. A lot. Whee.

I read that CSN Philly article and it boiled down to ‘if it turns out he’s going to be traded, then the Flyers should consider looking into it’. No shit, eh?

I’m excited for the eclipse. I think IW is coming home form work early for it. We’ll grab some chairs, a couple of beers, and watch it at the park. Who’s gonna stop us?

Maybe during the peak at 2:45pm, a certain player and his team will come to terms on a new deal.

Morning all. Love starting the week with a stupid long day. Happy eclipsing!

I have been without a shower or toilet in the house for a full week as the single bathroom in our 110 year old house is being remodeled.

The least anyone could do is sign a certain high-carbohydrate hockey player.

We had to completely replace the electrics and the ceilings in both upstairs rooms when we moved in (among other things).

Hose yourself down in the backyard? Find a local thermal spa?

And get a truck toilet!

I’ve cobbled together some solutions. It’s just not ideal.

Nicklas Backstrom is really great, but #5? Ahead of Bergeron? I do think that Backstrom is underappreciated and it’s good to see him getting some well-deserved love, but come on.

Scheifele ahead of Bergeron?!?!?

Eh, outrage is what these lists are for.

EDIT: Nicklas, not Niklas. I think Niklas is the goalie.

Hey Pals!
Bergy should be four or five on the list. He’s number one on my list, of course. Austin Matthews needs to do it a couple more times before I rank him that high.
Monday, meh.
Screw the coffee, give me bourbon.

Austin Matthews needs to do it a couple more times before I rank him that high.

You mean take a few more faceoffs, right? Just a few will do it.