With rookie camp slated to begin a week from today and veterans due to report in two, it’s a perfect time to speculate about the Stanley Cup Playoff picture. Yeah, I know- it’s August and hockey writers are itching to write about something. Paper rosters are often the strongest, right? Anyway, a writer for The Score has decided that 3 teams that made the playoffs last season will miss out this season. I’m going to let you guess about which one got the cover photo.

3 teams that won’t make it back to the playoffs in 2018 https://t.co/FSPbDG4NqG pic.twitter.com/Obe1XjXMKj

Yep, that’s right, the Bruins won’t make the playoffs this season but neither will the San Jose Sharks or the Canadiens. (Hold on, we’ll all point and laugh at the Habs soon enough because it’s always a glorious day to hate the Habs).

Sure, Charlie McAvoy and David Pastrnak are two young studs who have the capability to be the faces of the franchise for years to come, and the club managed to claw its way into the 2017 postseason.

However, that doesn’t change the fact that Boston lacks offensive depth, touts an injury-prone 30-year-old No. 1 goalie, and has an unproven blue line.

Now, not for one minute am I buying their argument about Tuukka. Tuukka played most of the season through a groin injury for which he required surgery. All season long, he downplayed this injury and continued to play through it. Sure, there were days in which he couldn’t go. But to call him injury prone is short-sighted in scope and isn’t taking into account his body of work since he’s been a starter. 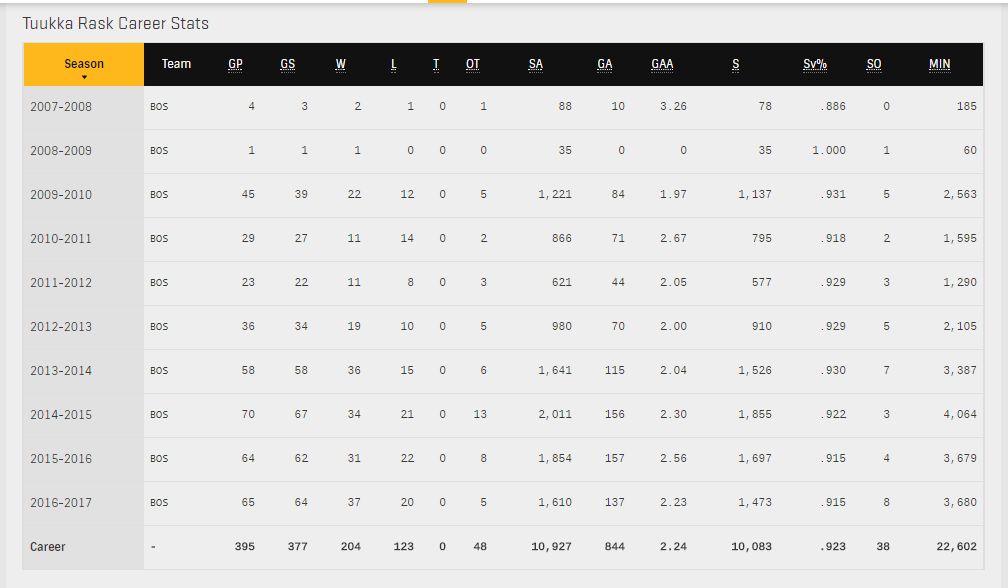 Is he perfect? No. But Tuukka is not a bad goalie by any stretch. He’ll bounce back this year.

Now, the offense- yep, it’s looking pretty shallow. Pasta still needs to sign. And there will be plenty of young guns clamoring for a starting slot which could mean good things, or bad. I think if anyone knows how to handle the younger players it’s Cassidy and his coaching group. He’ll be more willing to embrace change than Claude was.

The blue line held up more often than not last season and Charlie McAvoy will make a difference, even as he will undoubtedly experience growing pains. Brandon Carlo will get better because he knows he needs to. And Kevan “Do We Still Call Him KIller?” Miller built a good year even playing on his off side. Sure we lost Colin “The Player Formerly Known as Chiller” Miller (and Joe Morrow) but the Postma Always Rings Twice. (Sorry, that was terrible. And we want him to not ring anything.) Everyone worries about defense, and maybe we should, but I think the youth brigade will be exciting.

Especially when you consider some of the other talented Eastern Conference teams that will be vastly improved when the puck drops on the 2017-18 season. Toronto, Carolina, and Buffalo (yes, Buffalo) will all be stiff competition for Boston in search of the seventh or eighth playoff seed.

Will they all be? Toronto and Carolina will, for sure. But Buffalo? I think they’re still a few steps away. Not to mention that plenty of teams most likely got worse due to cap issues. These are all paper rosters and we’ll have to see what happens in games and real season situations.

Now, point and laugh at the Habs. They certainly got worse this season.

Before we get too ahead of ourselves, take in the forward lineup the Canadiens are prepared to play with this season:

Regardless of how you spin it, Montreal will struggle to score goals, as not a single one of their centermen has surpassed 29 tallies in a single season. As for the rest of the group? Well, let’s just say Carey Price better have another Hart-caliber year in his back pocket.

Anyway, I believe the Bruins will make it back. I underestimated them last season and I won’t again this one.

I forgot about Captain’s practices.

95.5 WBRU is ending FM broadcasting as of midnight. They were really good to me in my teenage years, so many musical memories and discoveries.

I has teh sad.

I enjoyed them – they had personality, and interesting content.

Very unfair to call Tuukka injury prone. Look how many games he’s played in the last three years. Can’t be many goalies with more than that.

Injury-prone status would have to be based upon missing a certain percentage of starts. Tuukka had a bad enough injury last season and still appeared in more games than he started. Not injury prone. However, are his numbers affected by his ailment? Yes, most likely.

That’s a fair shout. There were games last year when he clearly wasn’t 100%. Hopefully the surgery has put him spot on!

I was saving that fo tomorrow. I would have done that today but this article irked me.

Did you notice byline of the asshat who wrote it? Never give any credence to anything that comes from a grown-ass man who calls himself Flip.

We’re on the last day of August and I refuse to accept any of the “national” writers on what they say about teams being playoff-bound or not this season. I like thoughtful articles on the dawn of the season more because you’ve seen a little bit of the team at that point. Everybody has the ability to win or lose the Stanley Cup on paper.

I see no reason that the Bruins would regress. Am also not on the ‘canes bandwagon.
My early guess is that Leafs & Habs swap places. Maybe the ‘canes bump Isles/Habs/etc out of wildcard.

Tampa are favourites for the Atlantic Division and I heard someone talking them up the other day.

What have they done this offseason that’s so great?

I thought they lost more than they gained so it’s puzzling. It must be purely based upon Steven Stamkos coming back. But, will he really be back (blood clots be serious, yo) and will he be effective?

I say this only because he hasn’t played in about 1.5 seasons. The talent is still there but he’s probably slowed down some.

Stamkos is another one like Lucic where it baffles me that he’s still not 30.

It annoys me. BE THE AGE I EXPECT YOU TO BE!

The Bruins would regress if their forward prospects don’t perform well. That’s really about it. Tuukka isn’t the problem. The defense won’t be a problem.

And yeah, I agree that the Leafs will take the Habs’ playoff spot. Not sure what’s gonna happen with Ottawa – maybe losing Methot is a big deal, maybe it isn’t. Maybe the Canes steal a spot in the Metro, maybe the Flyers steal it instead, maybe both just miss out.

Morning all. The Bruins will make the playoffs.*

*This is not to be used against me if they don’t make the playoffs.

BTW, good morning everyone…..allergies are kicking my ass so im not going to be all that active lately.

If Bruins start off strong there is a very strong chance of them starting first 10 games 9-1….after that….ignore it….dont look….just dont do it.

Am i missing something? how did Carolina vastly improve to the point where they are contenders?

Not contenders, but they’ve developed well and have a shot at making the playoffs next season. The big difference is the improvement on defense, as they have one of the better young defensive corps with Justin Faulk, Noah Hanafin, and Jacob Slavin.