Now some fun from the four-letter sports leader and the little hockey channel under a major network umbrella. Did I say fun? I meant early morning eye torture.

First, an article that’s been kicking around for a couple of days from ESPN, a preview of the Boston Bruins 2017-18 season. It starts out just as lazy as it could and it doesn’t get much better from there.

It’s not a very good summer when the biggest move you make as a general manager is re-signing someone you couldn’t afford to lose. That’s exactly what happened with Don Sweeney and the Bruins this offseason, which ended with David Pastrnak agreeing to a six-year, $40 million contract just before the start of training camp. While re-signing Pastrnak was an absolute must — he finished behind only Brad Marchand in goals (34) and points (70) last season — the Bruins did little else in the way of improvement. In fact, the only new faces in camp are forward Kenny Agostino (who was named the AHL MVP last season, after posting 24 goals and a league-high 83 points in 65 games with the Chicago Wolves) and defenseman Paul Postma (who had a goal and 13 assists in a career-high 65 games with the Winnipeg Jets). “We made offers to players that signed elsewhere for different reasons,” Sweeney said. “That’s entirely up to the players themselves, whether the term wasn’t right or the dollars weren’t right or the location wasn’t right.” Sweeney might have been a little gun-shy after overpaying for David Backes ($6 million cap hit) last summer and Matt Beleskey ($3.8 million) the summer before. In all fairness, Sweeney entered the offseason with less than $10 million in cap space, and Pastrnak ate up $6.6 million of it with his new deal. As a result, the Bruins — who reached the playoffs for the first time in three years last season but were bounced in six games by the Ottawa Senators — will lean heavily on first- and second-year players to stay competitive in the Atlantic.

Let me get this straight: the Bruins will lose out by not overpaying in free agency? This season’s FAs were lackluster outside of Shattenkirk- who in a rare instance left money on the table to play for his hometown team. Drew Stafford waited as long as he could before signing with the Devils. But the Bruins future isn’t pinned to the chest of Stafford. Yes, there are legitimate concerns about obtaining a left-shooting defenseman, which didn’t happen. The only thing that seemed bungled about the Pastrnak deal is that it did take a long time to happen, partly due to the Draisaitl deal in Edmonton and partly because JP Barry is a jackass. And the deal is a good one for both parties. Agostino is hungry for a shot in the NHL after toiling in the AHL. Even if he’s the 13th forward, he’s still better than the man he’s replaced, Jimmy Hayes. Postma was looked at as a depth signing who will end up figuring in at the start of the year with Krug out. Even if a younger prospect like Grzylcek or O’Gara gets to start out the year in Boston and Postma is waived, it’s not a huge loss in any way. Sweeney’s vision for his Bruins team is not built in free agency, it’s around a core of veterans with youth starting their development in Providence and continuing it in Boston.

Anyone who watched the Bruins resurgence last season knew that Bruce Cassidy had a different look for the Bruins, one that emphasized youth, speed, and skill. He’s largely had a hand in the development of many of the players that will start out the season on the Bruins roster. Yeah, Beleskey didn’t look that great coming off a partial ligament tear and Backes had multiple injuries. He’s old, he’s slow, he didn’t score as much as other players. Yes, he may be overpaid for too long a term. I think that should they both stay healthy, they’ll have better years.

Too long, didn’t read- the Bruins are skewing younger and overpaying in free agency isn’t always a good thing.

Of course, we’re homers here but I expect that we can take and give some criticism for our team. Hell, we deal it out daily. So saying negative things about our team is not the issue. The issue is that ESPN fired all of their hockey writers and are cobbling this together with information that see on paper; its lacking insight at best. Case in point:

Case against: While the Lightning, Toronto Maple Leafs and Montreal Canadiens all made moves that should improve their standing in the Atlantic, the Bruins simply treaded water this summer.

Did the Haps make moves that would improve their roster? Preseason record aside, the team sounds like it’s a mess. And they’re considering Joe Morrow as a bottom-pair defenseman. The guy that Claude didn’t want to play in Boston for good reason (he sucked and his game doesn’t have an upside).

Earlier in the summer, NBCSN top pairing color-analyst Eddie Olczyk was diagnosed with colon cancer and needed time to be treated and recover. In the meantime, the network decided the best person to replace him and pair with Doc Emerick was this guy.

He’s taking this new role in stride and just trying to figure it out as he goes. Which sounds great, right?

“When you have a problem, someone has to fill in,” Milbury told USA TODAY Sports. “I’m a little nervous about it. It’s not something I’ve done a lot of. But the good news is when you are sitting next to someone as polished and celebrated as Doc Emrick you can just ride shotgun and not worry much. I hope.”

“He sees the game very well,” said Sam Flood, NBC and NBCSN’s executive producer and president of production. “When you watch a game in the studio, he has a lot of points that are relevant in the moment, but by the time we get to intermission, the moment might have passed.”

In the studio, Milbury watches games and has time to think about what he will say between periods. In the booth, he must microwave his opinions.

“You do have time to tee the ball up (in studio),” Milbury said. “(In the booth) you have to hit the pitch when it’s thrown and where it’s thrown.”

Because he is working with Emrick and Pierre McGuire, Milbury laughingly says that he knows that his job will not be to provide biographical information on the players.

Milbury said he believes the challenge will be deciding “when do I jump in and when do I pull back?”

“I guess my approach will be to shut up until I have something to say,” Milbury said. “Being patient and waiting for the right moment will be an interesting challenge.”

Oh, it will be an interesting challenge indeed. You may want to listen to the 98.5 audio stream for those nationally broadcast Bruins games.

Well, that’s happened. I wonder if someone will pick him up.

Oooh, the Czechs mix line is back!

Morning all. How dare the Bruins do the most important thing they needed to do. How do they sleep at night?

Agreed. It was lazy, lazy writing. It’s almost like they said, “Hey, we have to still pretend that we’re about all sports so let’s do NHL team previews! But, you don’t get to access the team, go to any games, watch any broadcast preseason games, or get any other info than what’s on this sheet of paper”.

Another thing, I noticed that Josh Cooper had written a Preds preview or something. Didn’t he write for Puck Daddy? I know Puck Daddy is bare bones now (only Wysh and that asshole Lambert) but it surprised me to see his name there.

The first sentence is just so damn stupid.

It’s not a very good summer when the biggest move you make as a general manager is re-signing someone you couldn’t afford to lose.

A not very good summer would be failing to re-sign someone you can’t afford to lose. Argh that first sentence makes me want to bang my head against the wall.

Yeah, not signing him or even trading would have been the worse. I’m glad they didn’t pick up an expensive FA. I’m excited to see draft picks become players. I like that from Sweeney on down, there is shared philosophy about the youth movement. I’m excited for this team. It’s going to be painful at times but it will also be super exciting. As much as I loved Claude, I feel like Cassidy was the breath of fresh air they needed.

You can't be a contender unless you spend too much money on free agents you don't really need! It's such a horrible thing that the Bruins would actually show confidence in the prospects that they've spent the last several years developing!
I mean, isn’t the whole point of having guys in the developmental leagues that you intend to actually use them some day?

No, it's so you can trade them for injury-prone veterans purely to piss off the fanbase

Well, shit. I wonder if Yahoo is hemorhaging money that much that they’re going for video content instead of print.

I think the author is a glue-huffing asshat.

I can imagine he wrote this after huffing glue.

The same can already be said for Chara, who at 40 should probably be home watching the New England Patriots on Sundays

Yeah, Chara has slowed down but we don’t need to Old Yeller the guy and take him out back and shoot him.

The next line is even worse:

Even Bergeron, 32, is starting to slow down: His 53 points last season were his lowest full-season total in seven years.

And then there’s this:

Rask should be entering his prime at the age of 30, but his numbers have leveled off in recent seasons.

In both cases, he blatantly ignores the known fact that the player in question was hampered by injury (sports hernia for Bergy, groin for Tuukka). How many other players at their positions would have been even half as good playing with such an injury?

Oh I knew there was sometjing I forgot. I was very pissed at that shit. No digging to find out what happened to those players and why they might have had issues.

Good Morning Pals!!!!!!
While the Lightning, Toronto Maple Leafs and Montreal Canadiens all made moves that should improve their standing in the Atlantic,
Yeah, that comment made me say “WHATTTTTT?” The Habnots only got worse. ESPN has not been hockey friendly for some time, so fuck them!
Milbury, always good for a few laughs. Milbury trying to shut up will be hilarious. Fuck Doc and Pierre anyway. They deserve Milbury.

I miss food association friday so I’m jumping in with pie!!!!!!!
I made two yesterday. One apple, one apple with some grape reduction I made from grapes growing outside the house.
The one with the grape reduction must be Pie McKenzie as he is from the Don “Grapes” Cherry era. I guess, by default the other is Daniel Paille. But who is the banana bread? I made some of that, as well.
Coffee and Pi, Pie, pie!!!!

That ESPN preview is like doing a book report when you haven’t read the book.

When I read that, this is what went through my head. 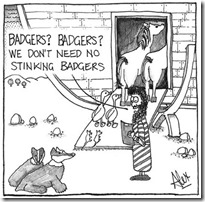 I have to make up some invites for Piefest! somehow and soon.