There’s another story brewing in Montreal, one of confidentiality of a current player, a malcontent ex-coach, and an outing of a substance abuse problem over the airwaves.

Mario Tremblay, one time coach of the Montreal Canadiens, is currently an analyst on the Canadian French language sports network RDS. This week he spoke about Alex Galchenyuk and his possible substance abuse problem. (Warning: the webpage is in French so you may have to use a translation page.) On 98.5 FM in Montreal, he stated that to his knowledge, Galchenyuk has had off-ice problems and hinted that he’d been through two courses in the NHL. What he means by two courses is anyone’s guess. Galchenyuk was asked about it after the Canadiens win against Florida on Tuesday night and rightfully disregards the question.

“I do not listen to the radio, I have Spotify. I do not know what you’re talking about,” said Galchenyuk, who met after the Canadiens’ 5-1 win over the Florida Panthers yesterday.

Relaunched on Tremblay’s words, he remained evasive. “I do not know what you’re talking about. Next question. “

What Tremblay actually means about two courses is curious. Is he saying that he’s been through the protocol twice or he’s been through treatment twice? It certainly doesn’t mean that he is in stage two of the substance abuse program, as former Canadiens player Zack Kassian was a couple of seasons back for he would be immediately suspended without pay.

The actual program that was determined through the collective bargaining agreement states that a players can undergo any number of treatment options from attending counseling to being admitted to rehabilitation facilities, as determined by the two doctors, one hired by the NHL, one by the NHLPA. Two rounds could even mean that he’s been through treatment and counseling.

Mario Tremblay is not new to getting under the skin of players. Most notably, he was the coach that pissed off Patrick Roy enough that he no longer wanted to play in Montreal. He would go on to lose other players during his brief two-year stint as a Habs coach. To say that Tremblay was a player’s coach would be a misstatement.

What’s the point in outing Galchenyuk? Is it to excuse his play or shame him? Confidentiality with regards to personal and medical issues should never be breached regardless of the person’s stature or how poor their play is as an athlete. Seems to me that some guy with a big mouth and an opinion is trying hard to remain relevant in a league that hasn’t had need of him in almost ten years.

Tuukka backing-up Dobby, too if that’s not old news

To be fair, he IS coming off a concussion. They’d probably rather NOT play him tonight, even if he COULD. 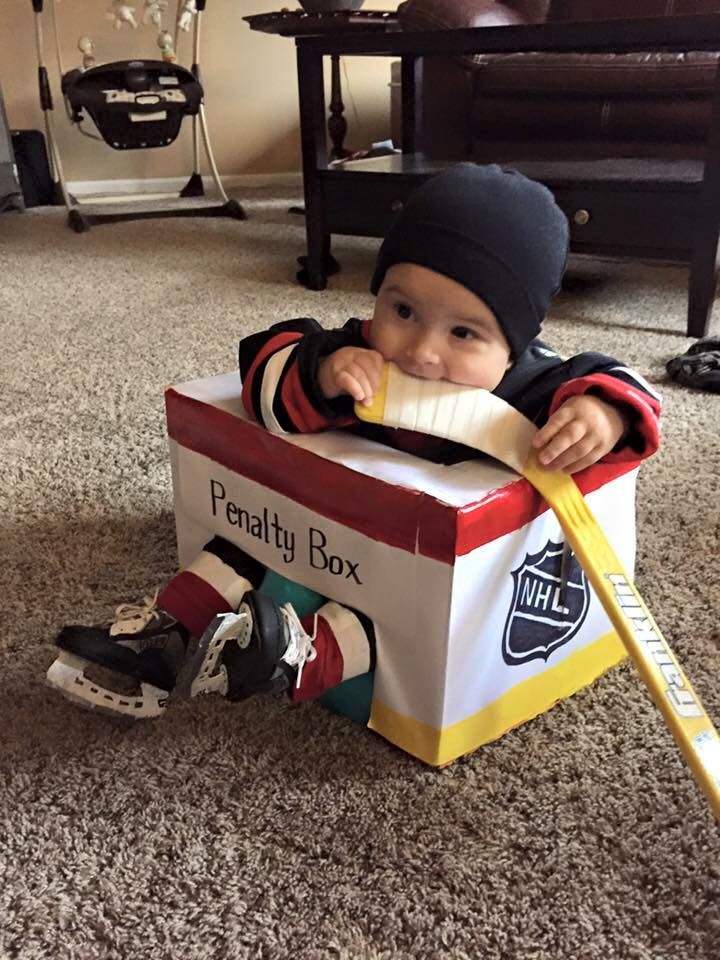 And that kid wins Halloween.

I’m only mad I didn’t see this before we started making a costume for our kid.

The biting of the stick blade puts it over the top

I love that he’s biting the stick!

Never felt old until a grown man with a beard told me he went as me for Halloween. pic.twitter.com/6xvugdLhyb

I’m dying at the fact he dressed as Bob Ross. The only question is why isn’t he drawing penalties?

This is a REALLY good question!

Morning all. Got have a late start to the day which is always nice. Tremblay is a douchecanoe.

Yep, his personal problems are his business and his employers and no-one else’s.

I’m planning to stay up for the first period tonight, but I’m not feeling great after rolling in at 2am this morning. I really should start acting my age …

Despite some heroic chirping, we lost our darts match against a better team. They even had a trick of their own – playing very slowly, which got even slower when they realised it was destabilising us! We’re learning as we go …

I keep meaning to ask, what does PUP stand for? There’s a punk band called PUP but I’m pretty sure it’s not about them.

Hahaha! It’s “Play up Punters”. Our team is called Ordinary Punters. Portsmouth soccer fans chant “Play up Pompey” to the tune of the Westminster Chimes, so it’s based on that.

That makes sense, thanks!

-As much as I hate on the Habs, this isn’t OK or funny. Even if Tremblay is right, this is bush league stuff.
-If he is correct, I do hope Galchenyuk gets the treatment/support he needs. Screw the rivalry, this is above that.
-But seriously, what the actual fuck, Tremblay?
-I implore all of you: do not get sucked into a web game called “Universal Paperclips”. What a time sink.
-I am very tired. See above comment. And baby.
-Might be able to watch the game tonight – if I can stay awake.
-Hopefully there are enough players left on the active roster tonight. Really does feel like we have a whole team of McQuaids right now.

Happy Thursday everyone! We’ve almost made it through the week.

What is this Universal Paperclips game…huh…

It’s a click based game where you are an AI that makes paperclips for a company. Although I didn’t finish the game, I do know that by the end

Member
UnstableElement
Spoiler
Pretty sure by the end the AI doesn’t care less if you live or die as long as every resource in the known universe is a paper clip or a component that helps make paper clips.

Seriously, though, the endgame is a bit of an existential moment regarding AI.

It is really hard to try and increase your paperclip output while trying to help a client on the phone.

Hey Pals!
Single game last night, single tonight. The legs feel fine skating – it’s walking that’s killing me!
Mario Tremblay – he was a Hab back when they knew how to play hockey. He has rings. He’s probably disgusted with the current version of les bleu, blanc, et merd.
Bruins hockey tonight!!l! I’ll be listening until I go on the ice (9:10), then I’ll be getting updates from Jo behind the glass at the scorer’s booth.
Mo work today!!! Hey, it keeps me off the street.