No, not really. It seemed like it was a bunch of tripping penalties with some skating in between. And that was just the first period.

Nothing really happened but tripping penalties. At one point, Matt Beleskey seemed amazed that he got half his stick stuck in Jonathan Marchessault’s skate. It was amusing.

Anyway, no score going into the second.

This is when the excitement begins!

Early in the second, Riley Nash is down and dirty, trying to squeeze a shot by Vegas goaltender Maxim Lagacé when it hits the opposite post. The puck comes back to him after Brad Hunt and Lagacé scramble to clear it and Nash slams it in the net for his first goal of the season.

If at first you don’t succeed, try again. 1-0 #NHLBruins pic.twitter.com/E7OnhaGVct

Of course, Vegas got lucky and Cody Eakin scored around the halfway point of the period.

Then, later on, Paul Postma did a beautiful thing: he prevented a goal by pushing the puck out of the goal mouth.

Pretty much all you need to know about is that there was at least one weak call (holding on Charlie McAvoy) and a huge first regular season NHL goal for Sean Kuraly.

At first we thought it might get called back because the net got knocked off it’s moorings but even Vegas’ attempts to bring No Goal into this game were in vain.

All the kids came out to celebrate.

We see @kurals9‘s celly hasn’t changed much since the spring. ⬆️ pic.twitter.com/VFp6n4CaGp

I guess with that game winner, Kuraly is pretty much out of the doghouse for all those penalties last week.

Ugh. It sucks it’s incurable but it looks like it’s treatable in some way.

I had a feeling Krejci wouldn’t be back this week and indeed he is not.

Ugh, I went out with a friend last night for a couple of drinks (white sangria!) and I’m actually feeling a little rough and not wanting to do anything today.

Good morning all! I’ll try to be around for the Caps game.

Took a little trip over to HEOTP and if you swap Tuukka for Price in this post he would sound like a Bruins fan.

The reason people shit on Price is because he is playing like shit and the body language looks as though he could not care less. Coupled with the fact that he is getting 80 million is reason to shit all over him. He is paid to play well. If he plays like hot garbage, like he has all season and for a long stretch last season, he deserves to be shit on…

Price was never the best in the world. He had a couple of good seasons, but he has never done anything in the NHL. Olympics do not count either because of the team in front of him. In fact, Price is an average goalie. I’d take many other goalies over Price, for much less money, any night of the week.

OMFG, that is Priceless! It is almost verbatim what I’ve seen RE: Tuukka.

They WILL be Priceless Saturday as he now has an LBI. Or will they find him later that night at a bar eating chicken wings?

HEOTP has got to be comedy GOLD right now.

It’as always a glorious day to hate the Habs! 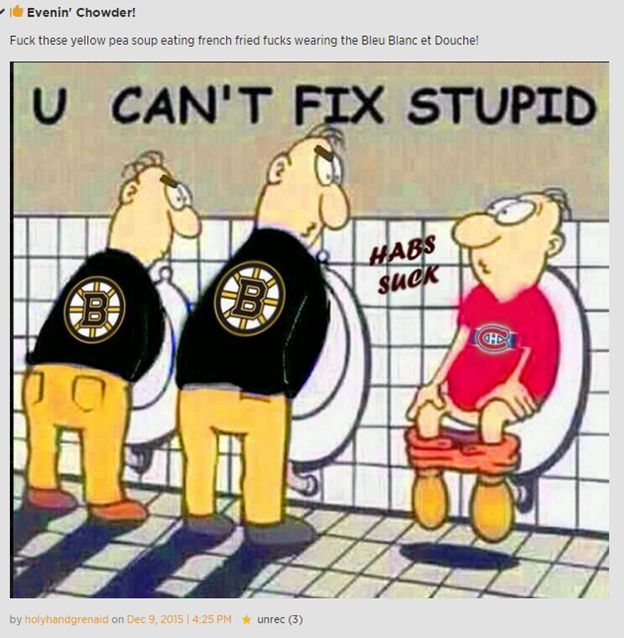 Wow, you dug for that one.

Nah, just did a google image search for “Hate the Habs”.

That reminds me I meant to check the Habs result. Guess I don’t need to now

I’ll take that win. points in six straight games is huge considering the injuries. With TOR and TBL in the division we need all the points we can get.

Not sure why Brick thought Beleskey penalty was harsh, but there were a ton of non-calls when Bs players got fouled. Again.

Watched the first two periods, then went to bed and lay awake for what seemed like a couple of hours. Ah well.

I’m speaking to you from halfway up Canary Wharf tower for the last time – on Monday we move offices nearer central London. I’m fine with this but after 18 1/2 years it’ll be a bit odd at first!

Did you darts guy get his shoes back?

Oh the poor chap. They phoned the pub and they did indeed have a pair of shoes. Sadly not his!

How many people lose their shoes in London pubs?!

And is this a new trendy thing to do or tradition?

I mean, my first thought when I walk into a bar is “What do I want to drink?” not “Got to take off my shoes!”

Yeah, usually I want to know what they have before I begin to strip get comfortable.

We’re too sexy for our shoes

Not shoes but it is most definitely RSF.

He was too sexy for lots of things. Was shoes not one of them?

Definitely need to change those to play darts …

Ahhh, Canary Wharf. I have beered there.

Really? Excellent! When I started here there was only one pub – and only one tower!

There are some decent places but a few too many trendy wine bars. Where we’re moving to, old-school boozers are more the norm. Which suits most of us!

Yes, we beered there after wandering around a bit, after you ordered me to take a nap because I was a crankypants, and we ate exactly no food. It was fun.

there were a ton of non-calls when Bs players got fouled.

It kind of made me wonder if the Knights’ success this season has been (at least partially) the result of officials’ generosity.

Hey Pals!
A win is a win!! We saw some of the game. I thought the kids were alright.
The tripping penalty against St Patrice was obviously called in error. The ref must have forgotten that he’s perfect.
I’m unusually sleepy after a night off. I even took a nap after Jo went to work.
COFFEEEEEEE!!!!!!!!!!!!

Morning all. Tried to watch the game last night but the first period put me to sleep.