Well, uh, that was a week of games, eh? They won against the Wild, then lost the last three, although it should be noted the penultimate game was an overtime loss, but they should have won it.

It’s hard to watch this team when they play like they did on Saturday. Hopefully, the rest between that game and the next one on Wednesday evening will be fruitful. Yes, this week is the dreaded West Coast road trip, which is early this season, starting in Anaheim on Wednesday and ending on Saturday in San Jose. Yep, three games in four days should be so fun. Well, that and the 10 or 10:30 (it varies) start time.

Anyway, how was your weekend? Did you lose in overtime on Friday night?

Thanks. Was trying to do a link from my Google Photos account but it was lacking the .jpg and thus came up as just a link. 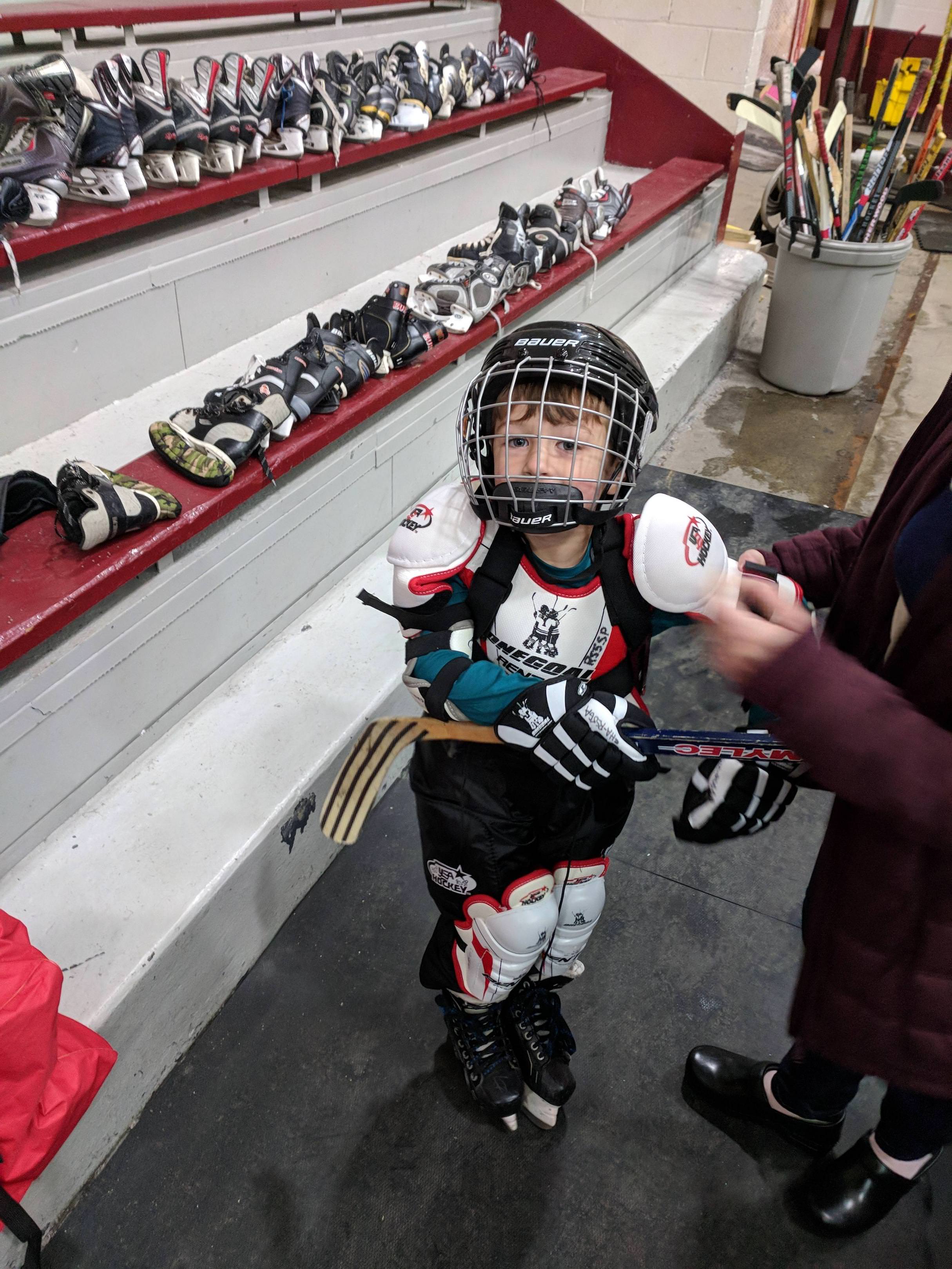 Awesome! Kids in hockey gear will always be adorable.

Thanks. First time on skates at a free ‘learn to play hockey’ session.
In skating classes now and pretty impressive. $70 for 8 hour-long sessions and they gave us a bag with all the needed equipment (skates, kneepads, elbowpads, helmet, hockey gloves) to hold onto as long as needed. He outgrows something just swap it out for free…

Makes sense from a big picture standpoint cause there’s no way I’d shell out for all that gear without knowing if he is serious about playing.

He better be serious about playing, the Bruins could use him on this road trip.

He could be second line center.

Bs do have a kid movement in progress.

It is snowing here and I am NOT okay with this!!!

My boss has this crazy idea that I came to work today actually wanting to do my job.

Krejci showing no ill effects from his back issues.

Skating with the team. EEEEEEEEE!

Noel Acciari, Anders Bjork, and Brad Marchand are not present for practice this morning. #NHLBruins

My reply to this is awaiting moderation. Weird!

Ha! Thanks. That was weird.

We got a puppy this weekend. Well, she isn’t exactly a puppy but she’s only 2.7 years old. Since we don’t know her exact birthdate, I’m going to call it March 1st. She’s pibble mix and a cutie. This morning, she discovered how to go upstairs. We’re going to have to think about how that plays into where she sleeps.

Ah, the B’s. As a fan it’s frustrating to watch but I imagined that we’d have more time and room for the new guys to kind of sparkle and grow. Injuries down the middle of the lineup definitely do not help that. They looked absolutely flat at times last week and that is worrisome.

Ah, there’s the solution. Unstable just needs to hit them with a bit of the ol’ razzle dazzle!

I think having multiple injuries down the middle is the biggest problem and likely has something to do with them looking flat. Once Krejci and/or Spooner are back, there should be less upheaval and confusion, and we’ll see a team that’s much more in sync with each other.

The Force was with you.

Hey Pals!
A less than glorious weekend for the Bs.
Maybe the west (wrong) coast trip will help them bond? Or maybe I’m bound for the asylum as this team is driving me crazy (I think there’s a gif for that).
Great weekend with Jo. Date night Saturday, disc golf with my kid yesterday. Lots of together time.
We saw Murder on the oOrient Express. Yeah, Big in Japan is right, it was okay. I’m not recommending it.
Had ref training at Trinity College yesterday at the crack of Are you kidding? It’s not a rule change year for NCAA, and the Federation (high school) rule book only changed some wording. Yay! I already know EVERYTHING!!!!
Okay, probably enough coffee.

I don’t get the ragging on Tuukka other than the fact when you lose its easiest (and laziest) to blame the goalie. I know a lot of people don’t like the salary but that’s not his fault. Even the defence isn’t THAT bad. They aren’t great either but about average.

As it’s been for a couple of years now, lack of goals is the main problem. Leafs are one of the worst defensive teams in the league and we put 3 past them in over two hours of play.

Only three teams in the league have fewer goals than the Bs and one of them has played fewer games.

Obviously the injuries haven’t helped there but they need to pick it up.

Yeah, it wasn’t Tuukka specifically that was the problem. If you don’t get opposing players away from your goal and out of your paint, you’re going to keep having problems. Tuukka can’t be blamed for the lack of scoring either.

Correct. They allow players to stand in the crease, uncontested. Come on!

On top of that, other than DeBrusk and Bergy, I don’t think any of our guys get in front of opponents’ goaltenders and clean up the rebounds for garbage goals in the crease with any consistency.

In no world anywhere is Khudobin a number one goalie. And I’m also trying to figure out how we’ve gone from “Must sign Pasta but the front office is the worst and will fuck it up and we’ll regret losing Pasta for the rest of our lives” to “PASTA IS THE WORST PLAYER EVER!”

Gotta love Bruins fans. Maybe they should adjust their meds or drink more. One or the other.

It’s all fans. Every fan base. Everyone wants everything from every player.
I was saying this at the Four’s the other night – you can’t ask every player to do everything. No, you don’t want Pastrnak to make ungodly turnovers – which he has been doing – but you can’t expect every player to be great at every aspect of the game.

Pasta just needs to figure out when to be flashy and when to keep it simple. That said, everyone is going to get burned from time to time.

I keep hearing about how bad Carlo is, too. I think he’s been half decent and I think he’s going to be just fine. He’s only little!

Also, getting lost in a sea of adorable bear cub gifs was awesome.

Yes, I am currently doing the same!

This was me getting out of bed this morning.

Excuse me while I die of cuteness overload.

PASTA IS THE WORST PLAYER EVAH EVEN THOUGH HE’S LEADING THE BRUINS IN GOALS & POINTS!

Dobby has had better chances at being a number one elsewhere and it just didn’t work.