Bruins – Caps is one of those matchups that you don’t quite want to see. Good thing is that this season series is now 2/3 over!

Early on, Zdeno Chara took Tom Wilson aside and let him know that he wasn’t taking his shit.

Lars Eller thought he scored but the Bruins video review team knew otherwise and spotted the offside Capitals player (it was Brett Connolly) so the game remained scoreless with NO GOAL joining Washington.

Later on, though, Jakub Vrana put the Caps on the board for reals this time late in the period.

Jakub Vrana SCOOOOORES and the Capitals go up early! pic.twitter.com/zJXE50L9bF

Capitals took a 1-0 lead into the intermission.

Early in the second, Jakub Vrana went to the penalty box for holding Brad Marchand’s stick (#B2BAfterDark). Patrice Bergeron figured it was the perfect time to capitalize on his error. Note that Alex Chiasson submarined Bergy just after he let the puck rip.

Patrice Bergeron is my favorite thing about hockey pic.twitter.com/VFaDoLpw5i

This wouldn’t last. Nicklas Backstrom scored his own PPG after Charlie McAvoy was called for hooking.

Backstrom is usually setting up the power play. This time he gets set up for the goal.

Brad and Dmitry Orlov got into a scuffle at the end of the second.

We can’t have nice things.

Remember when we couldn’t even score on Holtby? Well, we can do that now. Someday, the Bruins will win against the Caps just not yesterday.

So if a team claims Beleskey, is hockey twitter gonna complain that the Bruins lost something for nothing?

Hell yes.
In fact, they will complain that we got nothing for him, while simultaneously claiming that he was a useless component of the team.
Then someone will follow the chain of picks & trades all the way back to the Seguin trade, explaining how the Bruins have therefore traded Seguin for a handful of beans and sorrow.

Haggs? Is that you?

And Seguin has done wonders for Dallas

well, I just laughed my head off

“We’ll give you a player to be named later and cash considerations.” “We want beans and sorrow.” “Deal.”

Don’t come too near – I seem to have succumbed to the cold that has afflicted everyone else I know.

Didn’t see the game – couldn’t find a decent stream. The highlights seemed to suggest it was a fairly even game – Caps just managed to find the net more often?

During the Detroit game, did you notice when the puck ended up on top of the goal they played the song “How Bizarre” over the PA. I laughed outloud at that. Little things…

Have a great weekend!

Didn’t see the game – couldn’t find a decent stream. The highlights seemed to suggest it was a fairly even game – Caps just managed to find the net more often?

Shots heavily favored the B’s and we had numerous golden chances that we just couldn’t convert. Honestly, I thought it was a really fun game despite the loss.

The game was a fun one to watch, yes

I was hoping that the B’s would have turned a corner with the Caps but it’s going to take more time. Having them on the back end of the back-to-back didn’t help.

A longtime season ticket holder and institution in our section swooped down to his row (literally swooped) and sat next to him. She babysat him for the entire third period.

Not all heroes wear capes.

There are very few things more annoying than paying good money to go to an event only for it to be ruined by morons near you.

Hey Pals!
Bruins were due for a loss and the Caps have been their bette noir of late. This could be one of those seasons where they lose all regular season games against a team, then shock them in the playoffs! Yes, I dream big.
I think Caps fans would be happier if they matched up against the ‘Guins as well as they do the Bs .
I lined two girls games yesterday and the knee wasn’t horrible. New brace is awesome! Lining a girls game today, Reffing girls high school tomorrow. I dumped a couple boys games until I feel more comfortable.
Jo goes to Miami for the weekend (bee-aach). I have tons of work to do so…. FINE!
Mo cawfeeeeeee!!!!

How was the show last night?

Was consumed! No wax ( last night, anyway). I remember when wax referred to records(the music kind).

I was going too say if you consumed wax, that was one hell of a night!

Is that what the kids called it back then?

On a vaguely related note, there’s a Matt Damon movie “Downsizing”, where he joins a colony where everyone gets shrunk to ~4 inches tall.
I can’t help but think of a Steve Martin comedy bit called ‘Let’s get small’ 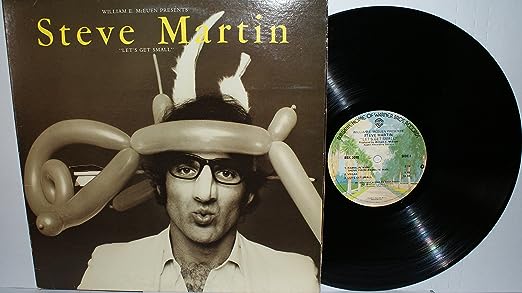