There were no shouts of “But it’s my birthday!” from section 306 last night as the Bruins won in a shootout on birthday boy Charlie McAvoy’s first and only attempt last night.

However, there was a shout of “Move the puck that way!” or something like that when Jake DeBrusk went on a hockey adventure in his own zone during overtime.

The first goal was on us as Phony and I used assorted prayers to the kind, benevolent and just Hockey Gods™ to will it to happen. Then I got confused because I thought it was my boy, Pride of Rhode Island™ and the game’s poster boy, Noel Acciari who scored it. It was Krug. Oops. Then, a minute later, it was on me because the Hockey Gods™ do not like too much gratefulness. They who giveth taketh it away.

I can’t remember if it was after that we tried mental telepathy (with assorted sound effects) but we did offer to sacrifice Dr. Handgrenaid, a la Mola Ram. He said something about wanting to stay conscious and alive to view the Bruins win. Fine, whatever.

We probably won’t have a post on Monday because it’s Christmas, so I wish you all a Merry Christmas, or a Happy Monday if you’d rather that.

My secret santa gift arrived yesterday! So thanks, Secret Santa, for the Marchand Pop and the cute dog calendar!

I’m still fighting a cold, but I’ve got some good doggy attendants and some old school JRPGs to power me through.

My boss and clients keep thwarting my “leave early” plans.

Hey guys! Rough morning! Catching up, or not!
Brought my boss’ gift in and guess what, he’s not here! AHHHHH

Just noticed only three of last night’s ten games finished in regulation time! And the three that did were won by the underdog

Before McAvoy took his shot, I said to DrHandgrenaid, “Of course he’s going to score.”

I called him as the game winner when OT began because it’s his birthday!

There were no shouts of “But it’s my birthday!” from section 306 last night as the Bruins won in a shootout on birthday boy Charlie McAvoy’s first and only attempt last night.

It was his first and only one last night. I am well aware of his first ever, which was also a game winner.

Has there been a shootout that went long enough to have to start re-using shooters?

Morning all. Oh boy that was a fun one last night. You just knew it was going to go to a shoot out. I wasn’t even mad when the Jets tied it. I just burst out laughing.

Andrew Shaw and Joe Morrow got in shoving match at the Habs practice yesterday!

All the laughing gifs here!!!!
Habenfreude at an all time high!!!!

Andrew Shaw and Joe Morrow got in shoving match at the Habs practice yesterday!

Oh my god, I love this. I take Joe Morrow’s side.

Wow, did you guys ever pick the right game to go to!

Great entertainment and a perfect finish! How good are these Bs right now?!

I hear Trumpty is bringing Christmas back. That’ll be nice for you. I wasn’t aware it had gone anywhere, but there you go!

Anyway have a good one if you celebrate it, and if not, I hope you enjoy your day off work.

I’m impressed you stayed up for the whole game!

Little Bear is done for the year at school so I didn’t have to get up this morning!

Actually I was forced to surrender to sleep 10mins from the end of regulation. Like you, I could see it was headed for a drawn-out finish and I wanted to enjoy the climax while fully alert

I hear Trumpty is bringing Christmas back. That’ll be nice for you. I wasn’t aware it had gone anywhere,
First you have to bring back Jesus!
have you found Jesus?

Yeah, the Bible-thumpers are so hung up on “putting the Christ back in Christmas”, they’re forgetting to keep the Christ in Christianity. Have you ever noticed that whenever they quote Bible passages to justify their hatefulness, it’s always from the Old Testament or Paul’s writings and never anything that Jesus actually said? I’m pretty sure that truly being a Christian take more than just calling yourself one – you have to do your best to live according to his teachings. They really should all go out & get one of those fancy Bibles that Jesus’s words in a different color (usually red) ink and just pay attention to those parts. Of course, if Jesus were to come back today, most of them would probably denounce him as some sort of “hippie liberal” (all that “love thy neighbor” & “blessed are the peacemakers” stuff) and look to crucify him all over again.

Spoiler
Full disclosure – this rant is a non/ex-Christian’s take on the matter, so make of that what you will. 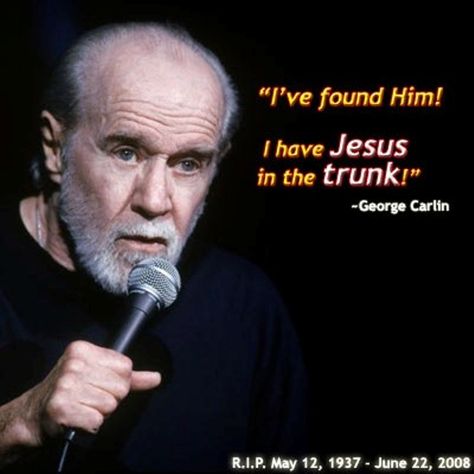 I read the other day that it was Christians who first insisted on “Happy Holidays” as they felt their religion was becoming over-commercialised. Sounds plausible.

Hey Pals!
What a great game last night! Beaucoup energy!!!!! The Bs are looking like that perfect combination of youth, still hungry veterans and great goaltending that goes places in the playoffs (going places as they are not likely to have a home ice advantage). Of course, this is December. If ifs and buts were candy and nuts….

So I posted instead of starting a new paragraph – shoot me!
Heading downstairs to the lab. Seriously, I have most of the gear the Orange County Choppers guys have. Less motorcycles, though.
I need to finish these bookcases for Istvan Francer for tomorrow delivery!! It would make great telly, except I only argue with myself. ” You eeediot! Vat de fug are you doing? See I really need a fall guy..
I have to go pick up the wood from my carpenter. Hopefully, he has it right. I need to get paid!!!!!
Merry Christmas everyone!!!
Coffee loaded with bourbon!!!!! Hey, it’s practically Christmas!!!!!

goes places in the playoffs

It’s early days, of course, but at the moment the most likely scenario sees us play Toronto in round one, then the Bolts, then Caps/Rags. If the Bs carry on as they are, those are all winnable series – not easy, sure, but winnable. Dream big!