Well, last night’s game was a wild ride. Goals were scored early and then, not at all for a long period of time, Dougie getting physical, and not enough booing for him. First, a rant.

I don’t understand why Boston fans don’t boo the fuck out of Dougie when he comes back. Every time PK Subban even thinks about Boston, a fan boos him, and he hasn’t been with the Habs in a couple of seasons now. However, Dougie who couldn’t hack Boston for whatever reason and basically went around with both middle fingers blazing on his way out of town, who said he didn’t want to be here and made fans and Don Sweeney sweat for a few weeks about a RFA contract that he didn’t want here, the fans don’t jeer him. Dougie screwed you over much more than PK did. Dougie deserves every ounce of bile you have, Bruins fans. His entitled ass deserves it and you should give it all to him. Fuck you Dougie, you shitbag.

Riley Nash scored in both the first and second periods, Patrice Bergeron also had two goals in a game in which tempers flared at times. Let’s be fair, there were some blown calls and embellishment by the Flames, but not on that Tripping call on Tim Schaller. He needed to go to the box for that one.

Calgary scored twice in the first, mere seconds after Nash’s first goal at 28 seconds. Then, again. But that was the end of their offense. Well, they were still offensive but that’s because they have Dougie.

The final nail in the Flames coffin was from the captain from deep in his own zone into an empty net.

Big Zee with the swish from downtown. #NHLBruins pic.twitter.com/clNzGQY9Ov

This was a good win for this tenacious Bruins team. You can feel the love between papa bear and his cub.

Swing your (defense) partner round and round. #NHLBruins pic.twitter.com/xx6oiCls3H 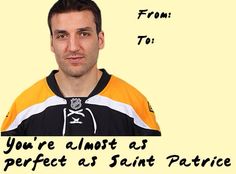 I told them they need to boo hard because Dougie sucks, and also because the Flames ruined the best thing in hockey (besides Patrice Bergeron): Jaromir Jagr. Now he’s incognito in Eastern Europe.

And don’t forget the bait-&-switch they pulled on us with Jarome Iginla!

Morning all. Bruins are one point behind Tampa with two games in hand. What a fun season. Absolutely enjoying it.

Seriously though, what a change from October and November.

Hey Pals!
I don’t have any feelings about Dougie. He’s gone.
Nice win last night.
I’m heading back to the river…. and have three games later….

Same about Dougie. He’s in my “don’t care” folder along with Seguin. Part of me finds it rather hilarious he doesn’t get much of a reaction. Go be a spoiled brat somewhere else, we’re fine without you. Charlie has all our love now.

I’m not mad that we traded Dougie. I dislike him intensely because he wanted out. I try to ignore whatever I can as far as people bitching about either trade goes, though.

Agreed. Everyone who’s still has their knickers in a twist over Dougie and/or Seguin needs to come to the realization that’s it’s time to move on.

Doesn’t Satan81 usually do the jeerleading when Dougie’s in town?

Hasn’t Dougie’s brother left Calgary now? He’ll be looking for a way out of there next.

Was Dion Phaneuf traded midgame last night? Why would OTT want Gaborik? Injury prone and we’ll past his sell-by date.

I’m watching Slovakia get thoroughly outplayed by Russia (or the Olympic Athletes). It was 2-0 after 4 mins but the Slovak goalie has found his rhythm now.

Two guys from the local team where I am are in the Slovak team, including the captain Tomas Surovy. He played for the Pens for a couple of season aeons ago.

It’s developed into a cracking game 2-2 after two!
Looks like US are having an easier time

I love the generic “Olympic Athlete From Russia” jerseys. My dad wants to get one and sit and the stands holding a flag that just says “flag.”

I think it’s funny that they have to share an acronym with a crappy pop-rock band (OAR).

Freddie Hamilton got traded (or picked up on waivers?) to Phoenix, I think. Or Arizona. Wherever it is they play.