Today’s the day of the big reveal of the Winter Classic sweaters! Everyone is excited, right?

Get your gear to go #BackOutdoors. Winter Classic jerseys arrive Thursday at 10AM. pic.twitter.com/BcGWlgMiJg

My question is this: who is the owner of that furry paw opening that walk-in freezer door? Is it Blades the Bruin, the longtime official mascot of the Boston Bruins? Or is it a bear of another persuasion? 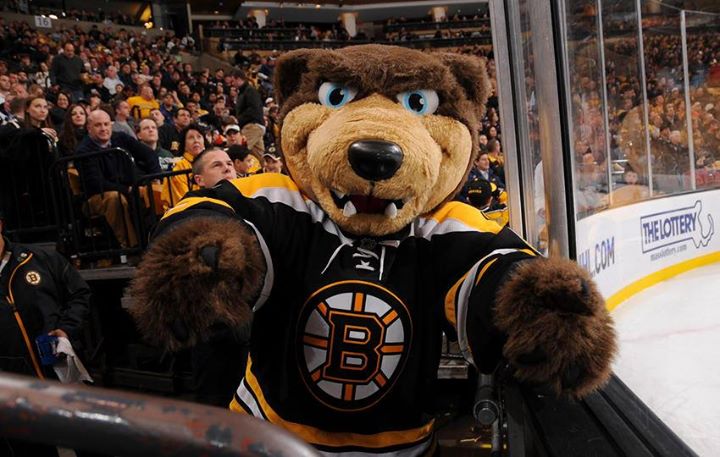 An aside: did you know there was a Wikipedia article on NHL Mascots? This is what it says about Blades:

Blades the Bruin serves as the team mascot for the Boston Bruins. Blades the Bruin is notable because he is the only known bear who does not hibernate. Blades first took an interest in hockey when watching Johnny Bucyk play pond hockey with groups of neighborhood children. One day, he sneaked in the back of Bucyk’s truck and was taken to the Boston Garden where Bucyk fed him pizza, hot dogs, popcorn, and pop from the concession stand. Blades was named by a young fan, Jillian Dempsey, in attendance at that evening’s game. Bucyk invited Blades to stay at the Garden and he agreed, assuming that the Bruins were bears like himself. Blades wears a XXXL jersey and size 13 skates.[8]

In January and February, Blades travels around the greater Boston area giving bear hugs to raise money for the Bruins Foundation.[9]

For a sizable amount of the team’s more recent TV and online ads, a different anthropomorphic, and more “lifelike” ursine character simply known as “The Bear”, but without a Bruins jersey/uniform, appears in official Bruins video advertising

It’s been quite a long time since we’ve seen Bear in anything that weren’t animated weirdness. For some reason, the Bruins advertising team has just abandoned him. For the record, there is precedent for Bear introducing the Winter Classic jersey. He did it in 2009 for the Bruins first one.

I hope it’s him, I really do. I miss Bear. He needs to be a greater part of our lives.

An injury update: looks like Kevan Miller and Urho Vaakanainen are back skating.

So my name says Ellen on my email so WHY DOES THIS WOMAN KEEP CALLING ME PEARL?!?

Because obviously you sound and look like a Pearl.

Funny story: at the local park I am known as Priscilla by some people, most notably a man named Steven who has two adorable Westies. I told him my name and apparently he thinks I said Priscilla.

Sometimes you just have to go with it. There was a woman in my town who for years called me Jodie. I didn’t care enough about her to correct her. And Priscilla is a pretty awesome name, especially if you’re on top of a bus with a long silver cape:

nd Priscilla is a pretty awesome name, especially if you’re on top of a bus with a long silver cape

Which of course you are, if you’re Queen of the Desert.

Not gonna lie, a lot of people do call me Queen.

Author
the german hammer
Spoiler
I think Priscilla was the name of the bus.
But I am a huge fan of capes, queens, and lamé.
Recch0Bag skate

That is fantastic and I am giggling like a weirdo now

Because you’re such a gem!!!

Send her a nice pearl for her trouble.

It's here. Get your 2019 Bridgestone NHL Winter Classic jersey at the @BostonProShop on Level 2 of TD Garden. #BackOutdoors pic.twitter.com/H21VAz87ap

That is a nice jersey. And it’s Xmas soon!

Love the felted B. Definitely treating myself to an early Christmas present!

If you want to make your eyes leak today You Tube has the full version of “The Away Game.”

Morning all. Had a dream last night that we all went to another game together. Couldn’t tell you how the game went because we were too busy celebrating Long Winded Mofo’s acceptance to Harvard Law School! Congrats Mofo!

I’m studying the law of averages! Thank you! Thank you very much!!

HA! Congrats, Stripes! You would probably be the worst lawyer ever!

The answer is out there in the netherworld…..and i think you’ve found it!!!!!

Hey Pals!
MIA yesterday because I BOATED!!!!! That’s really all i want to do these days.
Single game last night. Got to stretch the legs out a bit.
Was it Kassian that hit Urho? Whoever it was should still be suspended. One game, no? Insufficient.
Canucks tonight. Fuck ’em up, boys!!!
Now, do i try to reschedule the doctor appointment that i already moved from yesterday to today so i could boat? Cause i want to boat again today!!!

And…. Where’s the news on Chuck?

And Bear…. WTF? Don’t they know we love Bear?

Was it Kassian that hit Urho?

Borowiecki, I think. Yeah, a one game suspension then in his very next game he hit someone in the head. I presume he got a further suspension but haven’t heard anything about that.

You can go to the doctor anytime – I’m guessing boating conditions are only right for a limited time?

Did you get the sticker?

Or is it a bear of another persuasion?

I miss Bear. He needs to be a greater part of our lives

Definitely time for a Bear and the Gang reboot!

Oh man, Bear and the Gang with Pasta would be comedy gold! Make this happen!

haha, yes – we finally showed up! There’s been an air of the Bruins third line about us this season – maybe they can click into gear tonight too!