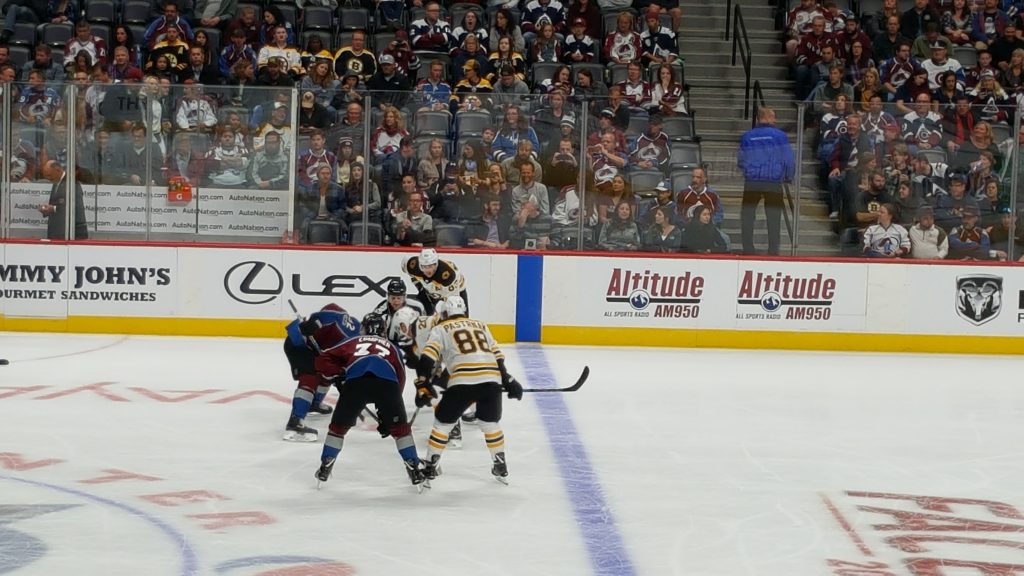 The Bruins are out in Coloraddy, in order for the Avs to play…
(OK, that line is best read in the voice of Charlie Daniels – or Yoda)

We’ve been hearing all year that Marchand-Bergeron-Pastrnak is the best line in hockey. Well, Avs fans have been hearing that about Landeskog-McKinnon-Rantanen, and now we get to see them head-to head. Or head-to-checking-line or something.

The Bruins have come off a two win streak vs the Toronto Maple Leafs on Saturday and the Vegas Golden Knights on Sunday.
Jaro Halak, stopped an insane 71 shots, including blanking the Leafs on a dismal 9-shot penalty kill in a 20 shot period.

Tuukka Rask returns after taking some personal time, but Halak has been on fire, and got two days off so will start. Charlie McAvoy and Urho Vaakanainen are skating again after extended concussions symptoms but are still not ready to play.

Prospects Jakob Forsbacka-Karlsson and Jeremy Lauzon will be on the ice again tonight. Defenseman Kevan Miller is still not ready and forward Noel Acciari will again be a healthy scratch. Brandon Carlo still has an upper body, and so is able to wear a shirt, but is not expected to play.

So the lines map out pretty much like they did on Sunday.

The Colorado Avalanche has been sporting a strong top forward line with Mikko Rantanen tied with Connor McDavid with a league leading 26 points (slightly ahead of Boston’s Patrice Bergeron) and linemates Landeskog & MacKinnon have 11 goals each. This has not necessarily led to victories but they are only a little behind the Bruins at a record of 8-6-3. To no-one’s surprise, they are not as defensively sound, actually sporting negative Corsi-rel scores.
They have not been completely immune to the injury bug, but I dare you to name the guys they are missing as none of them have played 100 NHL games. Carl Soderberg has apparently learned to play like someone better than Carl, as he made some nice moves against Connor McDavid on Sunday and is on pace for his best scoring season to date. (h/t Daily Faceoff and beat writer Ryan Clark):

Crazy here today. Short three people. There are two of us. AHHHHHHH

God damn it, Krejci.
That unnecessary holding penalty cost you this game. And it went down EXACTLY like I knew it would.
Waste 2 minutes with no offense, then give up another goal.

Why didn’t Carl play like this as a Bruin

Hey Pals!
Just back from my game.
WTF? I leave for five minutes and you break another d man?

Nuh-uh!
Carl did it. I wuz just watchin!

How random yet perfect.

GUYS THIS IS FUN, WHY ARE YOU SLEEPING