Can you feel it? Tuukka Rask is heating up and we all might just get Tuukka Fever. For the record, this is the best kind of fever you can get. Yes, it looks like Tuukka is getting into his true form as the sparkly BAMF with another strong outing and a shutout to boot.

Sure, only 24 shots against him but he saved every one. Tuukka also had excellent support from his teammates who put up four goals through the end of the second period and his defensemen who were determined to squash the Wild.

As is becoming the usual thing, Patrice Bergeron quietly put up a three-point night. Marchy did as well. Hey, even John Moore had a multi-point night.

Marchand being able to get this on net is pretty damn amazing pic.twitter.com/iyeXyvqded 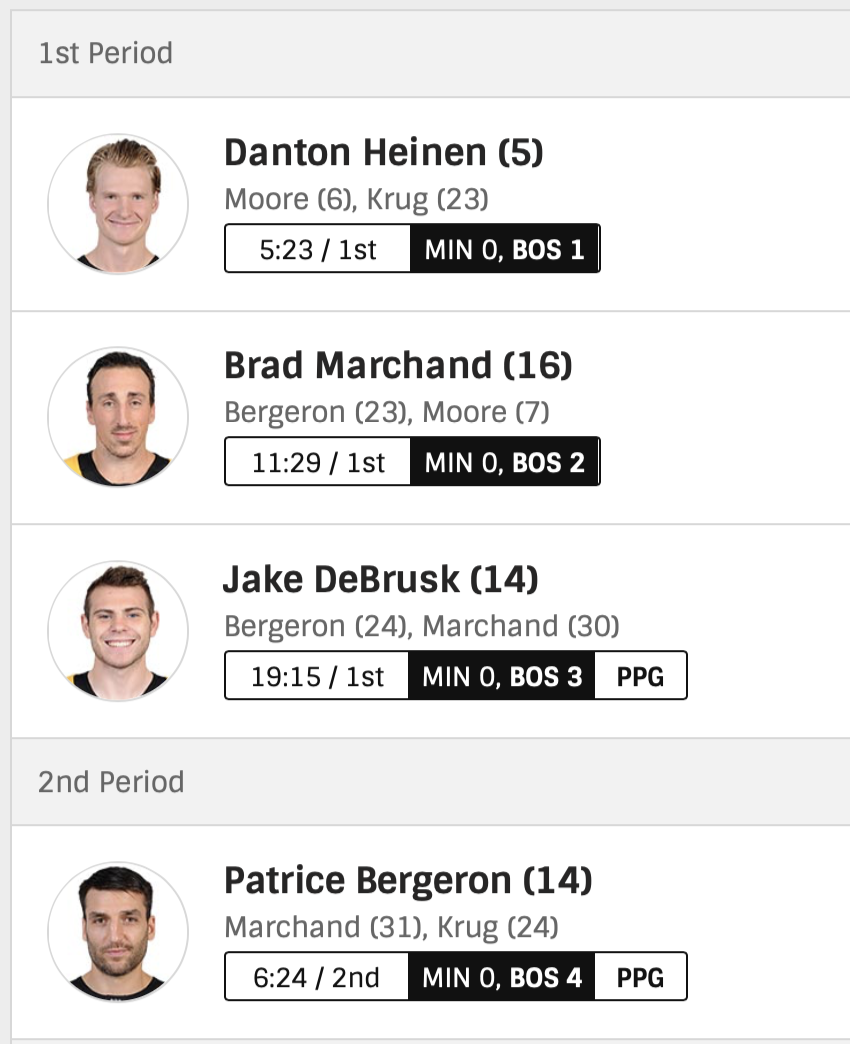 It’s also good to see some secondary scoring from Danton Heinen, who started off the scoring, and Jake Debrusk who had the weirdest goal of the Bruins perfect 2019 campaign.

It’s obvious he wanted to make a play without playing it with a high stick, so his chest worked just as well. Take a closer look at that smile.

Everyone knows I hate the Wild for having made me watch miserable, boring playoff hockey. However, had I known who would be the subject of the 8 Spoked Salute tonight, I would have high-tailed it down to the Garden to give multiple ovations.

The Bruins’ latest #8SpokedSalute is Peta from the U.S. Air Force. Look at this very good boy: pic.twitter.com/WHw8Mx96ag

The Bruins are riding a five-game win streak. Can they make it six when they meet the 2018 Stanley Cup Champions, the Washington Capitals on Thursday?

How many NHL teams need to die before the Boston Bruins demands are met?

How many NHL teams need to die before the Boston Bruins demands are met?

Will this finally shut up the “Trade Tuukka” crowd?

Hi All!
Saw the beginning, then watched the last hour of bruins in 2 when i got home…1 am!
Roofers are roofing today after a four day hiatus…… Please, God, let it end!!!
Heading up to paradise tomorrow!

Morning all. Too much shit to deal with and I just want to curl up on my couch and hide.

Love Brick being professional and actually breaking down DeBrusk’s goal instead of just laughing which I wold probably do.

I wasn’t sure it was even legal to score like that! You can’t kick it in, punch it in or head it in, but chesting is OK?

I’ll take any puck luck because the Bs are certainly due some this season.

But was there a distinct chesting motion? That’s what they’re looking for.

After further review, there is no chesting motion…… The call on the ice stands….We have a GOOD GOAL!!!

Last night’s game was fun, even though the Bruins were basically playing against a corpse army.

I think “corpse army” is the best description that the Mild could ever hope for. It’s infinitely more interesting than what they actually are.

Agreed. These guys would definitely provide a more exciting game:

Yeah, I think it makes them sound like they’re actually intimidating. We know otherwise.