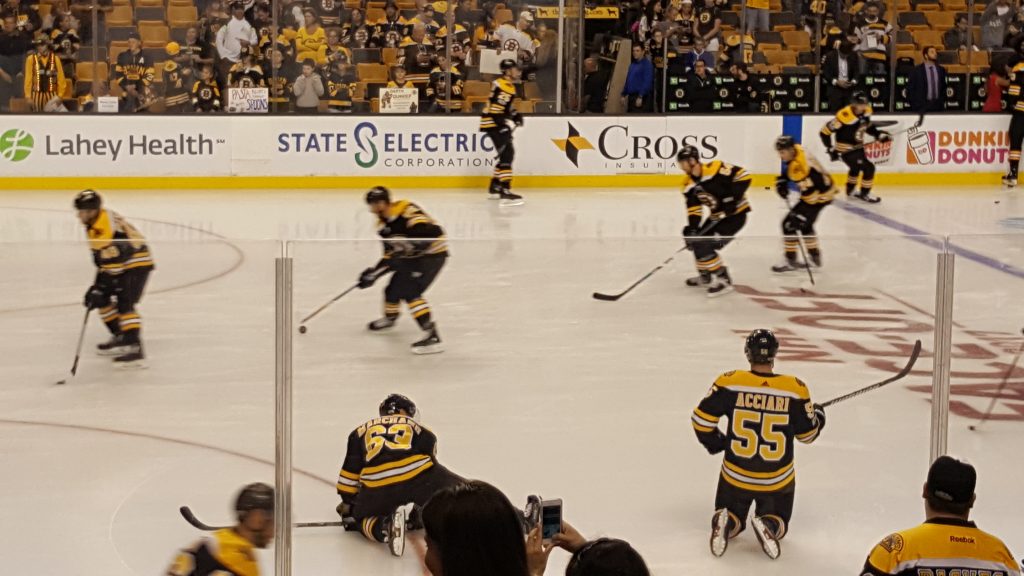 Tonight we get to see what we have all been waiting for: A match between 2019’s two undefeated (this week) teams, in a battle for dominance of (3rd place in) the conference! Capitals, Bruins, at the TD Garden.
BE THERE! Or not. I don’t sell tickets to this stuff.

All right, maybe it isn’t the marquee matchup that I have implied, but at the very least, we will get to see what the whole of North American hockey fandom is dying to see… which of Brad Marchand or Tom Wilson will pull a jackass move first, and will either of them see supplemental discipline.
BE THERE! And bring an attorney!

The Bruins have started the year on a roll, with 6 victories in a row, stretching back to a match vs the Buffalo Sabres in December. The Caps have won 2 games in a row, and have a one game advantage on the B’s. The Bruins have fared poorly against the Caps recently, being on the poor end of a 13-game losing streak, which usually involved being unable to score on Braden Holtby.

"I think we’ve been playing well, especially at home, and with our lineup playing the way it is, I like us against anybody. It’s a great test."

Winger Joakim Nordstrom suffered a cracked leg bone (fibula) in the Winter Classic, and is out on injured reserve, his condition to be reevaluated in 2 weeks.
Charlie McAvoy, has been skating with Steve Kampfer in practices, has been suffering from lower body injury – which has been revealed to be an infected wound on his foot – and is still not ready to play.
The kids are back from juniors, but no sign of any of them on the roster so the defensive pairings from the last few games are expected to persist yet again today.
Coach Cassidy has announced that Jaro Halak will start in goal tonight.

Living on a Prayer makes its return!

Bruins are getting the goals for once. Just not the saves,
and that one at least seemed like Halak had a pretty good view of it.

Yeah, his view was fine there.

Not a great goal there.

For Halak of a save.

Is it falling downhill, drunk on Red Bull & vodka?
Is there even a sport involved?

It is fucking awesome, is what it is