I know there was a bigger game to be had yesterday, on that involves super deluxe priced commercials, over-hyped performances, and a game with an oddly shaped ball but HOLY SHIT THE BRUINS BEAT THE CAPITALS!

In a game that was player much earlier in the day than the Super Bowl, the Bruins managed to score one more goal than the goose egg that the Caps served up. It was Pasta -> Krug -> Krejci.

David Pastrnak set everything up pic.twitter.com/qvNxlBwqCa

Tuukka Rask stood on his head and proved that he is a sparkly BAMF. 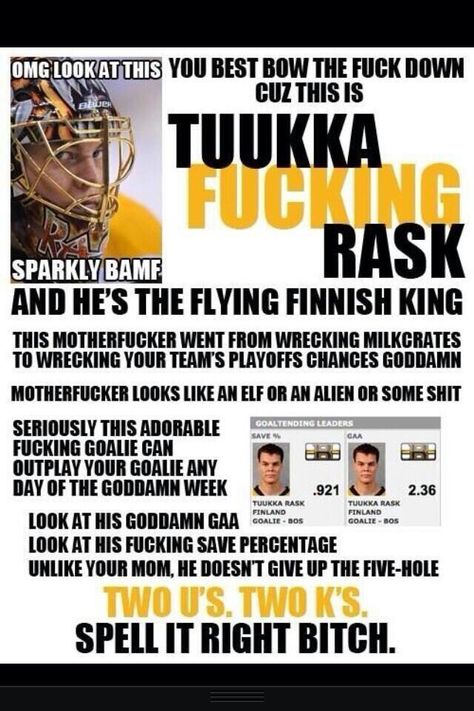 Finally, Tuukka is the winningest goaltender in Bruins history after surpassing Tiny Thompson with his 253th victory. Suck it, Tuukka haters.

Yeah, some other Boston-area team won last night as well.

The drought is over! After 98 days a Boston team finally wins a title. 😏 pic.twitter.com/eMtu1CnNQH

Turns out there will be a parade in Boston on Tuesday at 11am for them.

Hopefully, the Bruins are next.

On shit! Can I give all my future recchs right now???

Have you seen Man at Arms Reforged videos on YouTube? Metalwork isn’t really my thing but those shows are fantastic.

Morning all. Congrats to GH and IW on the Super Bowl win.

And congrats to Tuukka.

Thank you. GH & I worked really hard to get this far

Hey All!
Missed a beauty yesterday as we opted for whitewater over the Bruins – Craps. Ten boaters on the Farmington River! Fun, fun, fun.
Very pleased for Tuukka. Also glad he didn’t let Ovie (currently tied with Fedorov) become Russia’s all time scored on his watch. There was a little something missing it seems…..FOR THE LOVE OF GOD, COULD WE SEE SOME SCORING!!l!!
I watched halftime as long as I could bear it. I try to be open minded, I really do. Watched the second half. I do love that 90% of the country was mumbling and cursing all evening. (We’re close enough to NY for it to be audible.)
Back to production. Adulting!!!!

Anyone filming from a phone in their mouth?

Someone was filming and taking pics, but using a more conventional approach. Whether any of it becomes available to me????? Yo no se.
Had a very nice slide down a snowy hill, across the ice shelf and into the river….. hope the cameras were rolling!!!

For me, I don’t think anything will ever top Prince’s half time show.

I imagined the halftime show would be boring and bland but I didn’t expect Adam Levine to be tone-deaf, out of key, and just that horrible. Was I the only one who wanted him to put his shirt back on? Why do people who have terrible tattoos always want to show them all off. Seriously.

I have to go to work, but I’d rather sit here and do nothing. Oh well

I have to go to work, but I’d rather sit here and do nothing. Oh well

Yes, the first two games of the annual BC/BU/Harvard/Northeastern tourney happen this afternoon at the TD Garden. At ~5 & ~8 To be shown on NESN

My Beanpot guy forgot about my tickets, it seems, so we’re just gonna go to the championship. Oh well!

Was watching the 2015 Beanpot Championship during the first half of the Bowl. Shit ton of NHL players in that game! Future on display tonight!!!!!

Grizz with the OT winner!

Tuukka gets over the hump with a shutout win — against the Caps! HA!
After going something like 0-12-3 against them the last 5 years.
WOOT!

That’s our good old, predictable Bruins. Look really poor in losing to a bunch of non-playoff teams then beat the Caps for the first time in 14 years or however long. That was the first time the Bs have played at that arena this season, right? Right.

I swear the Bs were in their own zone for 10 of the last 11 minutes! Was that part of the gameplan?

There was another big event yesterday – the first ever Slovak league Winter Classic, held at the soccer stadium a quarter-mile from my in-laws’ house. The day before, there was a legends game featuring, among others, ex-Bruin Miro ‘the Hero’ Satan.

Unfortunately, on the day, the weather didn’t play ball and it pissed rain the whole match. A late empty-net attempt was prevented by the huge puddle in front of the goal. Ah well, they tried.

I looked for that Slovak Winter Classic on TV yesterday. Only some other sport i didn’t really get.

Just a glass of wine with dinner, occifer. Why do you ashk?

I swear the Bs were in their own zone for 10 of the last 11 minutes! Was that part of the gameplan?

Oh man, that was heart-attack inducing. I was about to head down to Washington and clear the damn zone myself.

Bs defence have periods where they seem to choose between three options when they get the puck on their stick in their own zone.
1) just stand there
2) slip over
3) pass to opposition.

Thankfully Tuukka was on his top game.

All I could think was “OH MY GOD GO PLAY THE OTHER WAY IT’S FUN I PROMISE!”

They seem like pretty good dmen most of the time. Glitch in the Matrix????

I feel like Quaider took all those delay of game penalties, and they’re all afraid to do it because of him!

You forgot attempt A and B, but shank it to opposing player wide open in slot.

AAAAAAGGGGGHHHHHH!!!
*Pulls eyeballs out of own head*