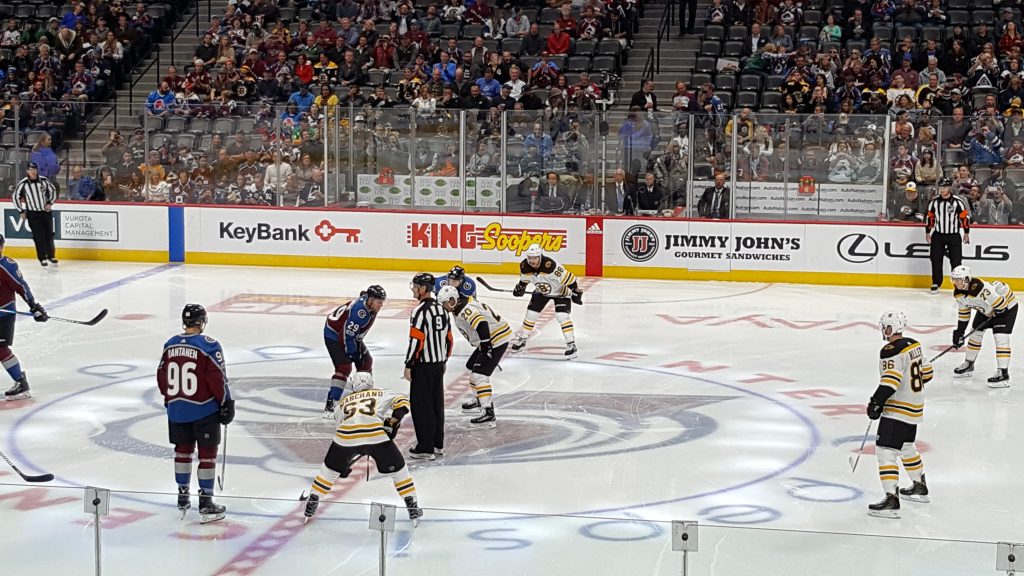 Today, the Bruins are in Boston for game two of NOT their “West Coast Tour” vs the Colorado Avalanche

Game one, vs The LA Kings, was yesterday, and the Bruins came away with two points.
The Bruins absolutely dominated time of possession in the first period, keeping the Kings to a mere 4 shots on goal, but in spite of that, they ended the period in a 0-0 tie. Early in the 2nd period, we had an actual penalty called for Drew Doughty knocking the net out of place. Yes, it happens regularly, but it is rare to see the delay-of-game penalty called. The scoring opened up a couple of minutes after the power play expired with this little play by Patrice Bergeron with the follow through by Charlie McAvoy. (Danton Heinen with the previous pass for a secondary assist)

After that, the script flipped, with the Kings controlling the puck. A series of two back-to-back penalty kills (Chara – Interference followed by Krecji slashy-thingy immediately after the kill) would cost the Bruins the lead with this sequence ending in Alex Iafollo putting a puck in the net:

It’s frustrating to see that, since Krecji’s slash to the hands was both too weak to accomplish anything defensively and too ticky-tack to actually blow the whistle for. So why do it, since you know it risks another penalty? Rabble Rabble.

The Kings would then take the lead with this passing sequence, after the Bruins were being pinned in their zone too much.

Dustin Brown sets up Anze Kopitar to give the LA Kings a 2-1 lead 😎#GoKingsGo pic.twitter.com/AHRnt8sssp

The Kings put 16 pucks on net in the 2nd period compared to the Bruins 4.

Early in the 3rd period, the Bruins tied up the game again with this Danton Heinen goal. Heinen was skating with Bergeron and Marchand in what appears to be an effort by Bruce Cassidy to spread the Bruins scoring to multiple forward lines.

Charlie McAvoy and Brad Marchand would get the assists. This would also launch the home crowd into chants of “Beat LA!” Bruins 2 – Kings – 2

The re-mixed 2nd forward line of Cehlarik, Krejci, Pastrnak has reaped some benefit, with a #47-#88-#46 goal off of this zone entry.

The Bruins would increase the lead with a shorthanded goal. A 2-on-1 with Bergeron and Marchand going against a single Kings forward has the expected result. We’ve seen a lot of that this season – it’s nice to be on the winning end of that sequence.

So the Bruins have a nice lead. This is great. Now pretend that you remember one time Bruin, Nate Thompson. Go ahead, I dare ya.

With 4:47 remaining in the 3rd, the Kings tied the game again, from an unexpected player

Oscar Fantenberg wasn't cool with the whole "trailing" thing so he decided to tie the game up 😎🇸🇪#GoKingsGo pic.twitter.com/ZyPoplGjVt

This would be Fantenberg’s only goal in 53 games this season. Tie game. 4-4

So the Bruins played against the last team in the Pacific Division, and rolled up a 2 goal lead in the 3rd period. Naturally that means they were destined for…

And Tuukka was forced to stop a rather dangerous Kings scoring opportunity before the Kings would commit a penalty – Ilya Kovalchuk (probably accidentally) put his stick under Patsta’s skate for a tripping call.
This put the Bruins on a 4-3 power play in OT. They rolled out #47-#37-#63-#88, and that led to this game-winning power-play goal.

So the Bruins got two points, which should have snuck them ahead of the Habs in the standings, but the Habs also played yesterday in Toronto and walked away with a loser point, so the Bruins remain in the top Wild Card spot, one point behind the 3rd place Habs with a game in hand.

In an apparent effort to spread scoring around, David Pastrnak started on the 2nd line yesterday, with Heinen taking the spot on the top line, albeit on his off side, with call-up Peter Cehlárik still playing on David Krejci’s left side. This trio should provide the B’s with some scoring creativity.

Other P-Bruin call-up, Trent Frederic got yesterday off, with David Backes back in the lineup. It looks like Backes will get today off bringing Frederic back at center, with Nordy playing wing and Kuraly rejoining the Acciari-Wags line. Frederic has been given scant time on ice at ~5 minutes per night in appearances so far. Defenseman John Moore was played last game as the guy he usually rotates with — Matt Grzelcyk — has suffered a lower body injury, and does not seem ready to rotate back in. Carlo was opposite Moore and McAvoy played at Chara’s side. All of this is likely to remain the same today. Jaro Halak gets the start today.

On Friday, Coach Bruce Cassidy commented on the lineup issues for this weekend:

Today is a second matinee game in a row, this time against the Avs.
They started out the season on a tear, challenging the Bruins Marchand-Bergeron-Pastrnak line as ‘the best line in hockey’ with their own Landeskog—Mackinnon—Rantanen line. However, they’ve lost a lot of games lately, falling to 6th in their division with a record of 22-22-10 for 54 points. They still have had success against the Bruins, most recently with a game in November, where Zdeno Chara was injured early, resulting in a decisive 6-3 Avs victory while the Bruins struggled playing with only 5 d-men.
Current injuries: Mark Barberio is out with a head injury, Vladislav Kamenev is still out after shoulder surgery in December
Ian Cole was injured on Thurday in a fight with… Tom Wilson, and I’m getting mixed signals as to whether he will play – he did not play yesterday, with Ryan Graves coming in as their 6th D.
(h/t Daily Faceoff):

Two big points – puts us back above the Habs.

Enjoy the rest of your evenings

Have a good night!

Was beginning to think they’d have to move to a new building to beat Colorado!

My autocorrect changes “big save” to “Big Dave”

Tell us about Big Dave!

Varlamov needed a Big Dave there.
He’s hungry for BiG Dave and hasn’t been getting it like he used to.

You don’t have to pass it backwards, guys, it’s not rugby

I really want Charlie to get a goal with the game he’s having.

I love how confused & disgusted the Avs look when they get an unambiguous penalty.

Well that was a nice development after Krug’s hook

Can we not with the penalties.

Unless of course Colorado also goes to the box.