I wanted to write something about trade talk and all that but late at night when I take the time to do this, my brain is mush. So, we’ll table that for later in the week and I’ll give you some fluff for now.

In the spirit of tonight’s game, I present this video from the NHL talking about how all the hockey players love dogs. Well, almost all of them.

When it comes to players' favorite pet… it's a 🐶 by a LANDSLIDE. pic.twitter.com/rQOqknwcKZ

Even Tuukka, who has allergies to cats and dogs, still would want a dog. Poor guy sucks it up when he has to pose with dogs for the Pucks and Pups calendar and he wishes he could have a dog.

How can you not love this?

It’s official, Patrick Kane sucks as a person. I bet dogs dislike him. And he doesn’t deserve them.

On to a better, more awesome person, who owns a dog: Patrice Bergeron was named the NHL Second Star of the Week. He only had a million goals and a gajillion assists in the past week, fueled by his 1000th game in the Bruins organization.

The NHL named Patrice Bergeron the second star of the week. But for Bruins fans, he’s always the first star in their hearts.

He is the number one star in all of hearts all the time.

General manager Don Sweeney, addressing the media here at Warrior Ice Arena, says that David Pastrnak underwent a procedure on his left thumb. Repair was successful. He will be out for the next two weeks and then be re-evaluated.

Pretty sure he got slashed the other day.

Reminds me of when Matt Herr said “Hey Stripes! C’mon. They’re slashing my 35 goal scorer out there!”
35 goals? They’re not slashing him hard enough!!!
“What????”

I got stuck late for work and now all the things are happening at once.

I’m obsessed with kittens this morning:

In the wake of the latest news, I see your kittens and I raise you one puppy

More pets being cute and adorable:

Oh my god so orange I love him!

Hey Pals!
As you know… “Anyone who hates kids and dogs must be Patrick Kane!”
so much talent wasted.
Okay, looking for a cancellation tonight…. need to see the Bs live…. yup, I watched me some replay yessrday at 3!!

Stay strong Stripes! Is the work to do with your skate hangers, or working for The Man? Cos if it’s the latter, then screw it!

Both!!!! At least the skate hangers will make some dough??

I sympathise with Tuukka – I’m allergic to all sorts of animals. It didn’t stop me trying to be a jockey… I could say that didn’t end well, but it a roundabout way it led me to where I am and I can’t complain about that.

That said, I’m struggling for motivation today. Friday is my last day of work before we go to Slovakia for our annual winter trip, and I can’t wait!

It didn’t stop me trying to be a jockey

Hey, your family’s got horses, right? Early mornings and hard work – not sure how I’d cope with it now. When you’re 16 it doesn’t occur to you that one day you will get old!

You don’t believe people when they say your body will start to hurt for no good reason! I wish I believed them! hahaha

I remember Ol’ Mrs Parsons telling me about joint pain…. so, really, what could I have done about it??

Morning all. If you don’t like animals then I don’t trust you. They do cute and adorable things that make our lives wonderful. 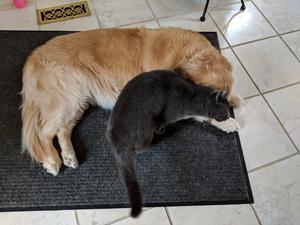 Where are you? I hope you all haven’t perished, or been abducted by fake aliens, like the poor girl in Abducted in Plain Sight.

been abducted by fake aliens, like the poor girl in Abducted in Plain Sight.

Oh my god there was so much mind blowing stupidity with that case.

I keep thinking about it and shaking my head. It’s totally bananas.