These Stanley Cup Playoffs are chaotic; evil or good depends upon your vantage point. Last night was the final game of the first round, another series that went to Game 7 and multiple overtimes to determine the winner, the Carolina Hurricanes.

With the Capitals out, that leaves the Bruins as the top seed in the East and with potential to have few dangerous obstacles. By no means am I suggesting that the Bruins won’t have a workload nor that any of the remaining teams are pushovers, but rather with Braden Holtby out of the playoffs, the Bruins chances to return to the Final are much better than they were yesterday morning.

This series against Columbus looks to be fun and physical.These teams met up three times this season, each time after the trade deadline so there should be few surprises. Even though the B’s won the season series 2-1, the one game they lost was a blow out, 7-4. So, that memory should keep the B’s on their toes.

Supposedly, we can make new brackets for the Second Chance Bracket. I guess there was so much chaos that the NHL decided to be nice to us. Presumably, we have to do them by 7pm tonight. I have no particular insight as to how to complete one. If I figure it out, or if anyone does, we’ll share that info here.

Ohio native @kurals9 discusses the #NHLBruins second-round matchup with Columbus and the influence the Blue Jackets had on him growing up: pic.twitter.com/dRmt4yzWgh

“Yeah, i lived there for awhile, not much to say about it.”

Just having a Normal one.

All of this is very useful information. 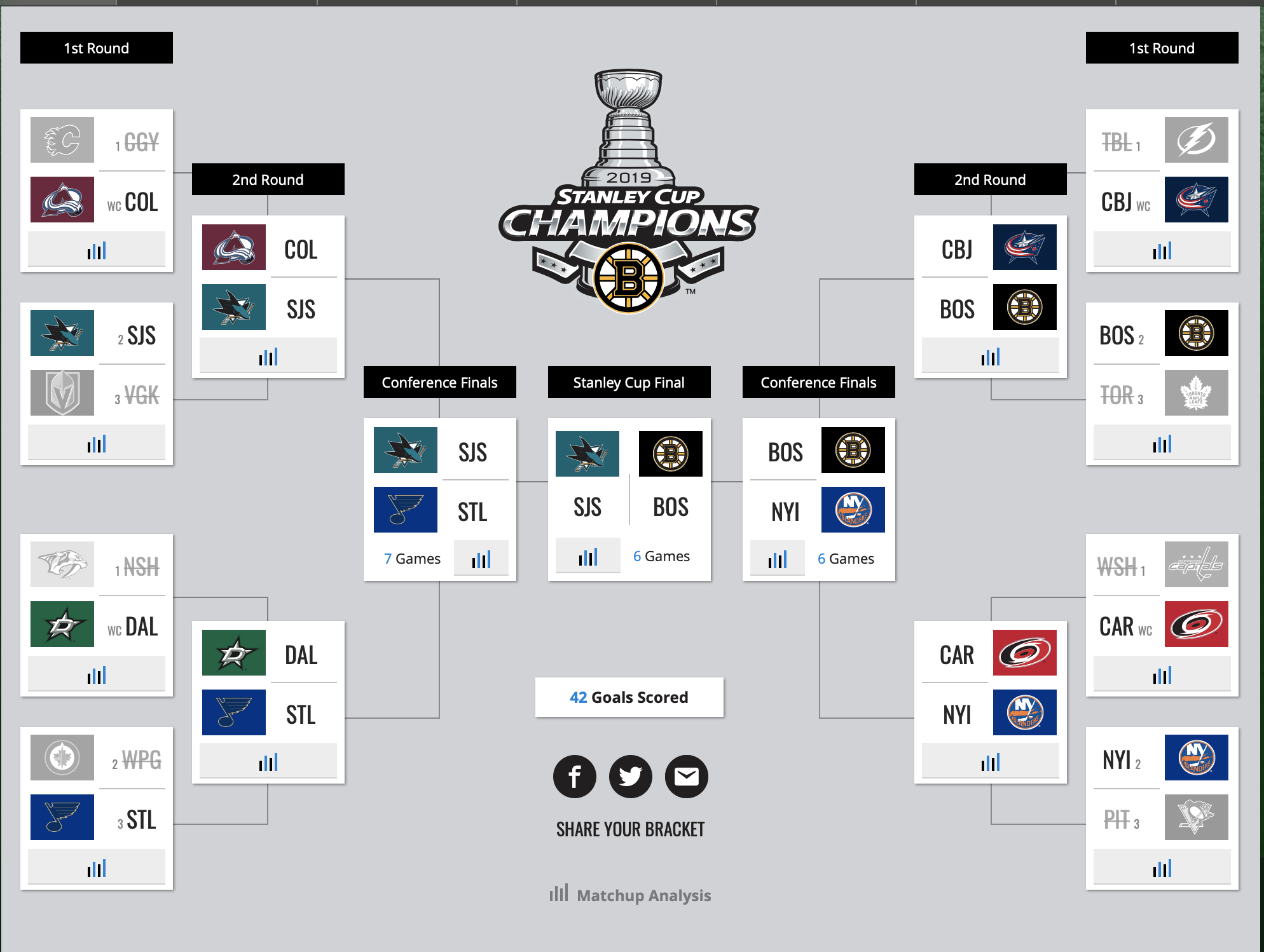 I am fucking PUMPED for tonight. See you at the Garden!

Ugh! I’m jealous!!! Not as jealous as i’d be if you were in that sweet luxury box that GH and Eye Dub shared with us!!!!

So the Canes made the local news last night.

Must have been a slow news day

Do they have a new post game act, or something?

Featuring the Meat Puppets, i hope!!!!

Do they really not normally make the news at all?

They make the Raleigh area news, but outside the Triangle (Chapel Hill, Durham, Raleigh) not often. It also doesn’t help the team typically sucks.

Morning all. So exactly the playoff results we’ve all predicted.

All my bracket have the Bruins going all the way!!!!!!

My Barely On Topic Bracket is completely nuked.

I actually had the Canes in seven on one of mine. Think it was the “close eyes and click randomly” entry!

So all of the division winners lost to wild-card teams?
That’s unusual.

I’m particularly shocked to hear that the Caps underperformed in the post season.
That never happens.

“Here are your winnings, sir”

Hi Pals!!!
Wow!!! Caps gone golfing!!! The ‘Canes are no joke. They play a different forecheck and never give up.
The Bruins need only concentrate on the BJ’s, er, Columbus. Got to get on ’em early, before they get the rust off.

Just to be on point, my darts team lost to the bottom team in the league last night, 7-6 despite taking an early 2-0 lead. Ah well.

Bs straight back at it tonight, eh? Time for some favourites to win.
Don’t know about the players but I’m exhausted and could’ve done with a rest!

I fell asleep early in the first o\t…. Still exhausted.