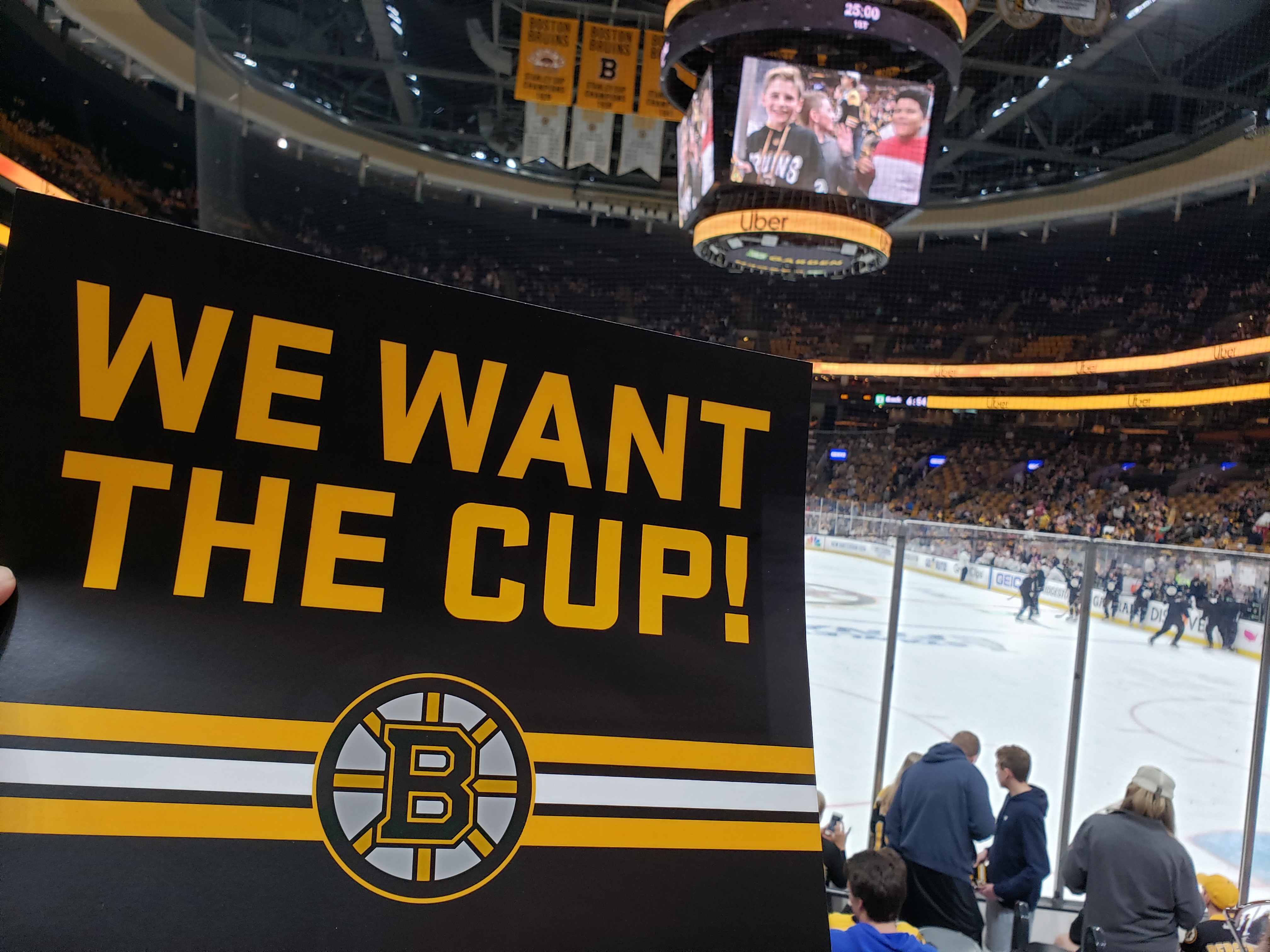 Last night, the Boston Bruins held an inter-squad scrimmage, one team wearing white and the other black. This event was to help the B’s get their legs going before Monday’s Stanley Cup Final Game 1 with ticket sales going to the Bruins Foundation. The place was packed.

The game started before 7pm, which left many people left out of the action since Boston traffic was just the worst yesterday. (It took us 2 hours to get from our house to the Garden) It was supposed to mimic game action but with two periods of 25 minute play and refs to oversee the action. Well, the players wore practice jerseys without numbers and no one kept score. 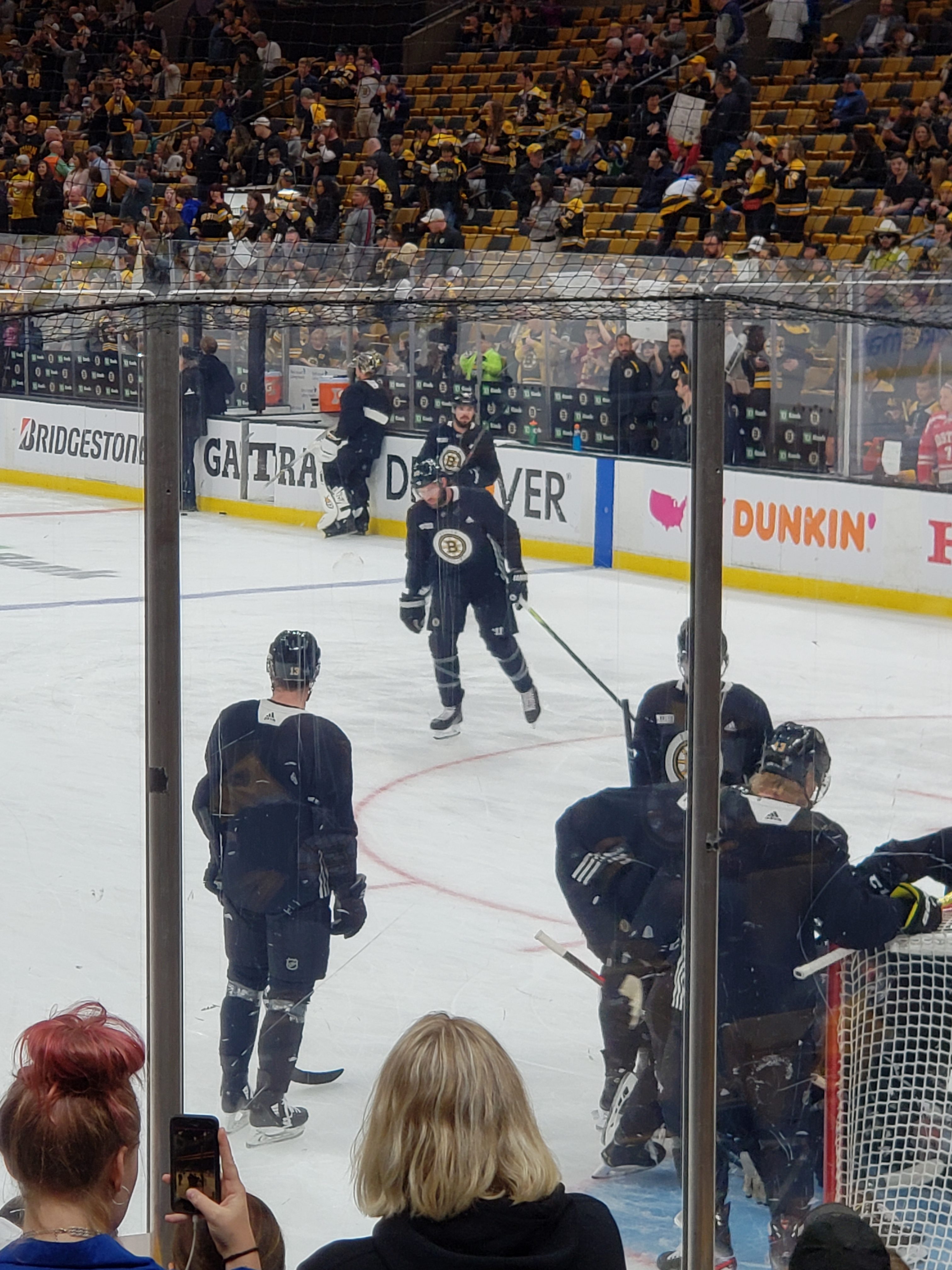 There was a penalty, one that I can only guess was for shooting the puck at an official. And Jake DeBrusk was traded from the black team to the white one with 6 minutes left in the first period.

One scary moment occurred when Brad Marchand skated off the ice gripping his wrist. He came back for his next shift, having shaken off the pain.

“Once you go 10 days with no playing, I think it’s good to get a little action in and get used to that pace,” Rask said. “I think that’s what we wanted to accomplish and it looked good.”

It was fun to see the players up close. Even Charlie Coyle’s grandmother was there, so proud that he was going to play for the Stanley Cup.

Fun part – Tuukka did not come back for the 2nd period, with Zane McIntyre filling in. But since they were both in unmarked white jerseys with black helmets, the folks in the back didn’t notice that they swapped, and chanted “TUUUUUUKKKK” after a blocked shot.

Then once people started to figure it out, they didn’t know what to chant.

I tried to start the “ZAAAAAAANNNNNNE” chant but no one else wanted that.

Also, fans did the wave last night. I was so embarrassed for them.

Morning all. Pretty calm right now but I’m sure the Cup Final stomach ache will be here soon!

I’m starting to feel it too.

I wonder how Backes is feeling. This is his first Cup Final in case you didn’t know.

Yeah! And he’s playing against his former team too! He was their captain.

Looked like the scrimmage was fun, although a shame they couldn’t wear numbers or keep score – that would have made it rather more engaging for the fans. Ah well.

Turns out the cottage in Scotland I’m staying in next week does NOT have Internet access! Ahhh!

Could be a blessing in disguise, though. A week without social media isn’t a bad thing, and by the time we get home the NHL.tv blackout will have expired and I can binge watch the two or three games I’ll have missed.

So, to those going to the games – enjoy! Cheer the boys on and go home happy!

See you on the other side when we’re hopefully at least on the verge of lifting the Cup!

Looks like you’re just going to have to cancel the trip!

Ha! I wouldn’t be very popular at home ….

A small price to pay!

Hey! Did you know David Backes, who is 35 years old, will be playing his first Stanley Cup Final game? It will be against his former team the St. Louis Blues. He was their captain for many years.

That rings a bell. I thing I may have heard that somewhere.