Yesterday morning or perhaps late into the night before, Brandon Carlo agreed to a bridge deal to end his training camp holdout, a deal that turns out to be a fantastic deal for the Bruins in both the short and long term: 2 years at $2.85 million AAV. After locking up both Charlie McAvoy and Brandon Carlo for under $8 million for the next two years is the kind of skill that resulted in Don Sweeney winning GM of The Year for the 2018-19 season.

We have more good news…@1996_Carlo has been signed to a 2-year contract with an annual cap hit of $2.85 million: https://t.co/dWqMVsyE9z pic.twitter.com/HPWvIg6tTv

Not a bad way to start the day. @1996_Carlo | #NHLBruins pic.twitter.com/RhXB8wwSsw

Despite what Ryan Lambert thinks, this deal is pretty sweet since Carlo was likely in the $4 million/ year range before the playoffs and upwards of $5 million a year after. 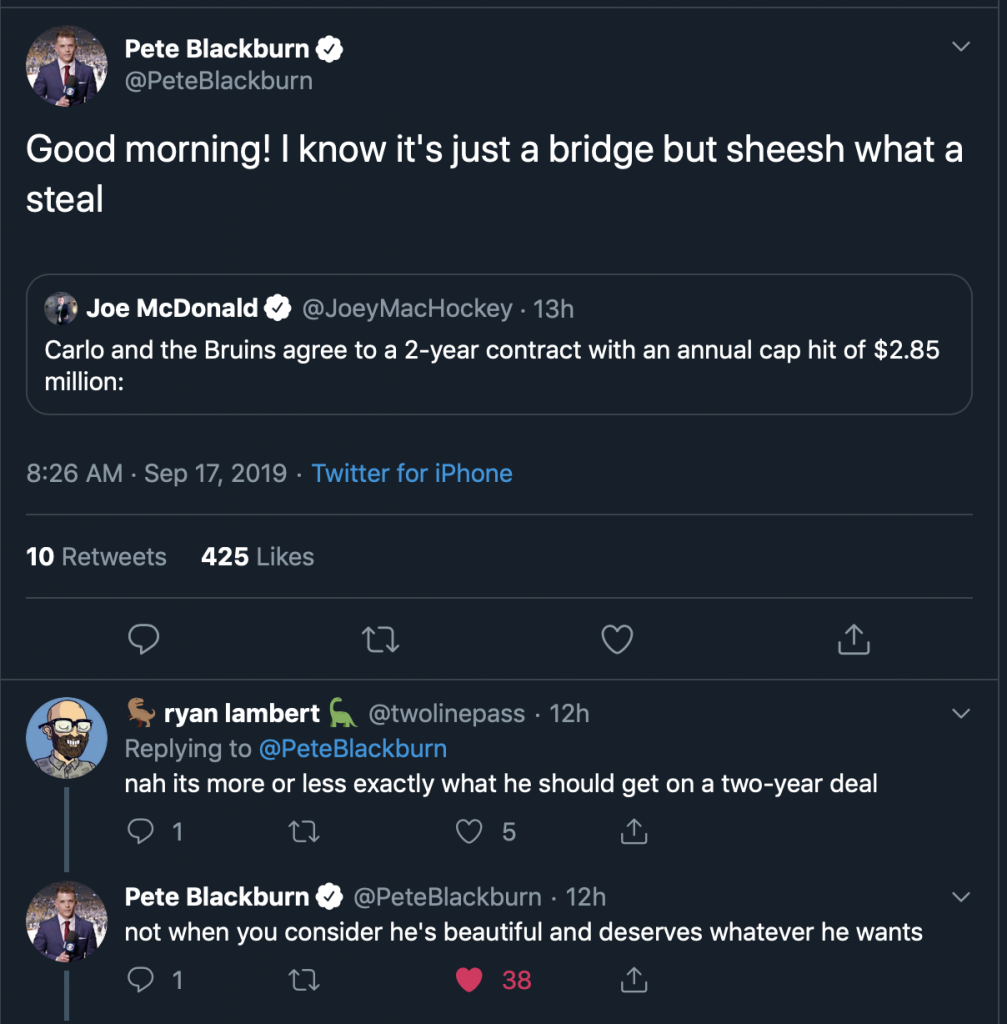 By the way, Pete is absolutely correct. Brandon is beautiful and deserves it all.

With Carlo getting a shorter deal and still retaining his RFA status, he’ll no doubt be looking for a longer deal and more money as the the contracts of David Krejci, David Backes, and Tuukka Rask come off the books. Charlie McAvoy’s deal expires the next year but having both deal staggered makes it easier for Sweeney to sign them both.

.@1996_Carlo goes 1-on-1 to talk about his new contract and the City of Boston: "All the people here treat us so well. It's really become home." pic.twitter.com/FtgydWloko

One of the more curious things to come with yesterday’s news was Sweeney’s presser during which he made it clear that he was responsible for Carlo missing the time he has in camp. was this part of the deal that he would cop to this? Or was it just his way of owning up to his mistake and apologizing to Brandon for making him wait so long on a deal. I mean come on, he had to work on both deals.

The team is as complete as it will get at this point, so let’s play some more preseason hockey and shape the Boston and Providence Bruins.

Hey, everyone! Great to see a hockey-like substance via streaming!

I really enjoy that when I go to YouTube and start seaching for “bruins leafs game 7”, I get my choice of three different games to watch.

I had a wacky dream this morning that I was on a hockey team of mostly goalies and we worked at a Target. The dream kept shifting from game to game in a store and I was really fed up with my fellow goalies for sucking.

I had a dream I was in a hotel looking for a bathroom and realized that everyone who goes into this hotel gets murdered. My first clue was a dead guy hanging in a closet. My second clue was the bellhop coming to murder me.

But I did go to a big beer hall first and had a beer so the evening wasn’t a total waste.

Hi All!
Yay!!!! Steal is not the right term…….. Highway Robbery!!! Grand Theft Dman… suntin’ like that. Just me, but in the long run Carlo may be more important to the Bruin’s future than McAvoy, and that is not meant as a slight to Chuck. With his size, skating ability, and ability to see the ice well, Carlo has plenty of potential.

Headed north yesterday. An absolutely perfect day in the hill towns!!!. Got a bit of work done and went to visit Uncle Donald (carpenter’s uncle, but everyone seems to call him “Uncle Donald”) who has a saw mill on top of the mountain. Looking for a slab of wood to make the bar top. Unc D is going to make some flooring for us, as well.

Today I really will try to work!!

I think you might be right. Charlie is great but he still has some mistakes he needs to iron out and his lofty reputation is something he maybe sometimes tries too hard to live up to.

Carlo just seems to be getting better and better.

I dunno, maybe I’m looking too hard for a narrative.

Carlo is much more important in my future than McAvoy is something I just typed out.

I just love him. Someone’s gotta love the stay at home defensemen.

I really feel Carlo is more than a stay at home D man. He is D first, but has learned that when the outlets are choked off, he can skate the puck until someone is open. A d man moving with the puck puts a lot of pressure on the opponents team d. If no one adjusts, Carlo can go take a shot. If they adjust, he has outlets.

I really hope he will be a life long Bruin!!

Carlo is a wonderful story – one easily missed by the less serious hockey pundits like Lambert.
With some of the contracts out there, getting Carlo for < $3M is pretty impressive.

Morning all. All hail the Sweenius.