Greetings from the Quarantine Zone. IW and I are both on the Injury Report this week: IW has an illness and I have an illness plus and abdominal injury (from coughing). Seriously, we’re on the edge of death over here.

Other players are on the official injury report for the Bruins. David Krejci, who’s been fighting either a recurrence of the same injury or a new one entirely, will not play tonight. He’s listed at playing 5 games when it seems like far less; he did leave 2 games early and he’s missed 3 outright. Karson Kuhlman, who sustained a lower body injury after blocking a shot, will sit out tonight. Joakim Nordstrom will be a game time decision.. Par Lindholm looks like he could play tonight.

David Krejci did not skate today, will not play tomorrow vs. TOR.

Karson Kuhlman (blocked shot in TOR) did not practice.

Joakim Nordstrom (red non-contact) "not as far along." pic.twitter.com/4z5yZaIaqC

Tuukka Rask will start tonight in his 500th game.

"He's been a great teammate and he's so easy going…He's had a phenomenal career and nowhere close from being done, very happy for him."

📝@tuukkarask takes a moment to reflect as #Tuukka500 nears: https://t.co/l0EnjxPKrc

And finally, my favorite time of year has arrived! The Bruins players did their photo shoot with dogs from MSPCA or their own private stock for the annual Pucks and Pups calendar.

Hey Pals!! AWOL yesterday. Beautiful day in NW Mass. Saturday and Sunday on the West Branch Farmington in New Boston. 3 miles of boogie water, stay on your game!!! So much fun. Helmet saved my ass (and head) Sunday. Broke the chin strap on impact. I rolled up and the helmet was floating next to me, scooped it up and found a place to get my heart rate down. Quick fix got me through the day.
Bs looked good both of the last two games…. predictable finishes. Glad Bruce gave Kuhlman a shot at second line with Coyle and DeBrusk. I guess something was lacking in his eyes. Depth!!! We’re about to see how valuable it is!!!
Cutting wood today!!! Come help, please!!!

Wow. You are one lucky bastid.

Morning all. Best thing to come out of Pucks & Pups is this: 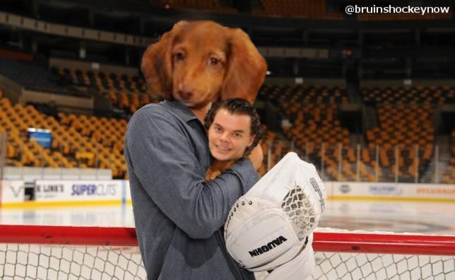