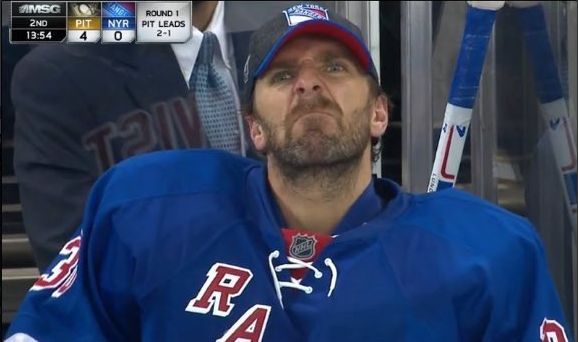 The Bruins face the Rangers in the big apple tonight at 7PM EST on NESN & MSG.

After 10 games, and winning the “well we coulda-shoulda got the championship” consolation cup match vs the Blues, the Bruins are at 7-1-2, which is good for 2nd place in the Atlantic.
The NHL leader boards currently have a lot of Black & Gold on them. The Bruins are the league leader in fewest Goals Against per game with a stunning 1.90. The player with the most Goals scored is David Pastrnak, with 11. The goaltender with the highest save % is Tuukka Rask at .952. The best Power Play in the league is the Bruins, scoring 34.4% of the time. It’s been a good start to the season, though secondary scoring hasn’t really developed.

Not quite the usual suspects today.

Well David Krejci has been out with an upper-body injury, but was last skating in a white jersey at practice, and is expected to return on Tuesday. Karson Kuhlman is on IR with an arm fracture, after blocking a shot. Anton Blidh is having shoulder surgery, and will miss the next 4 months. Joakim Nordstrom, who has been in & out is out again with an infection. Chris Wagner, who returned to Saturday night’s game after a shot block that sent him down the tunnel, will not be playing tonight. Peter Cehlarik has been called up from Providence on emergency basis – he has scored 6 goals in his last 6 AHL games, and we all know how the B’s like to call up the hot hand.

Jaro Halak will be in goal today.

This evening’s opponent are the Rangers. They are healthy right now, with no reported injuries. There have been quite a few personnel changes since last we faced them. Most significantly, they were the winners of the Artemi Panarin sweepstakes. Vladdy Namestnikov is now a Senator, Jimmy Vesey is a Sabre. Mats Zuccarello is on the Wild, Kevin Hayes is a Flyer, Kevin Shattenkirk is a Bolt. The Rangers are an anemic 3-4-1 on the season, putting them in 7th place in the metro division. You can expect to see Hank in net tonight.
(h/t Daily Faceoff):

Pasta and the King mixing it up!!

Hank getting a little pissy. He’s always been a bit of a drama queen.

Lightweight Lundqvist is very frustrated goals are being allowed, maybe he should try to stop the puck? Good for Bruins!

It’s tough being the king when you haven’t won yet.

YESSS!!!!!
I Definitely see why THAT was a goal!
HAHAHAHAHA!

Please stop yelling, I have a headache.