Last night’s game was ugly. There was way too much animus between these two teams that only meet twice a year, likely because one team is riding high and the other is sinking further in the depths of the Pacific.

Last night was Hockey Fights Cancer Night at the Garden and the star of the night was Weymouth’s The Mighty Quinn who dropped the puck for his best friend.

I’ll bet the Mighty Quinn is mighty excited right now. When his mom told me that he says Charlie Coyle is his best friend, well, my heart exploded.

The Mighty Quinn, you are truly an inspiration. 💜#HockeyFightsCancer pic.twitter.com/iNXXRgvY7u

The first period was all about discipline- who had it and who needed it. San Jose committed three penalties in the first, two back-to-back. ultimately, the scoreboard would reflect the winner of the battle between the leagues top Power Play (Boston) against the leagues top Penalty Kill (San Jose). The power play won out twice with goals by those two crazy Czechs named David, Pastrnak and Krejci, about 10 minutes apart.

After a brutal one-game skid without a goal, David Pastrnak is back at it.

Hopefully the start of something good for this guy, idk pic.twitter.com/1A1dbhcg3j

David Krejci with his first goal of the season.

The Bruins have now scored on 35 percent of their power plays, more than a third of the time.

They have two of them tonight, lead 2-0 after one against the Sharks.

The Bruins decided at some point in the second frame that they would put on a clinic. In this period, all of their goals would be at even strength. After Brent Burns scored on the lone second period power play for the Sharks, Charlie Coyle showed how to light the lamp after the man advantage expired.

A little over three minutes later and not content to allow the other local kid (and former South Shore Kings teammate) to outshine him, The Mayor brought it home.

The silkiest mitts in Walpole belong to Chris Wagner pic.twitter.com/3fbJO5KTPf

Brandon Carlo with his second goal of the year.

So far, 11 different Bruins skaters have recorded at least a point tonight.

Brandon Carlo has two goals in three games. Feels like we can stop talking about secondary scoring now

In this period, Evander Kane decided to go into full-on Dick Mode. He nastily hi-sticked Charlie McAvoy, Zdeno Chara to want to have words with him, with Brenden Dillon interceding. Penalties all around! After serving his penalty, he decided to try more dickish stuff by having a fellow Shark pancake Charlie again. This time, Chara was having none of it and wanted to go. The refs had other plans but ultimately no one would go.

Later, other Sharks would try other moves, like high hits on Marchand, but whiffing.

Just after Jack announced it was a powder keg, Brett Ritchie and Barclay Goodrow exchanged pleasantries.

First fight of the season for the B’s.

While both would get matching fighting penalties, Brett Ritchie also got a Game Misconduct and was never seen again.

In this mess, the Sharks lost their bench boss.

Then a wave of penalties: 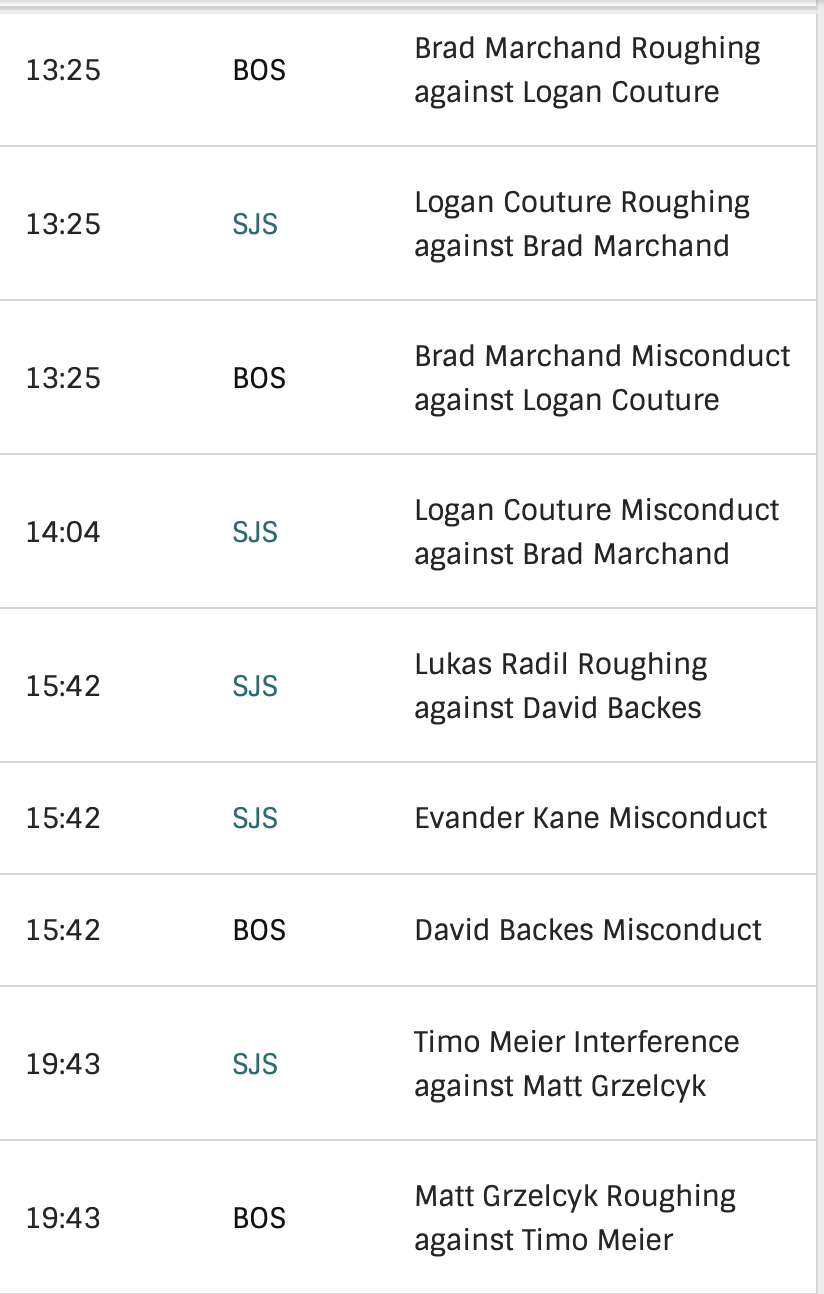 So many penalties. Thankfully, the B’s protected their precious assets, well mostly.

Bergeron and Pastrnak did in fact not play the final 5:56 https://t.co/YGLlALD6EF

Bruins won 5-1 after they outshot the other team 41-17. I wouldn’t be surprised if San Jose gave DeBoer the axe after this game.

Nice to see this team support each other during difficult times:

Very happy for @pastrnak96 to break through and show perseverance.

I watch the New York Rangers this season and I honestly can't decide if they're just naturally this bad or if they're actively trying to be bad on purpose pic.twitter.com/1Q8qvWVkX8

Really don’t get what’s going on with Tampa. On paper they look at least as strong as last year.

Glad I only stayed up for the two periods of hockey and not the 20-minute free-for-all!

It just shows you the lack of wherewithal and discipline the Sharks have right now that instead of buckling down and trying to score more and “win” the game or at least have some dignity in their defeat, they made a decision to go dirty.

Replay of the Sharks in the third period:

Pretty much. We’ve seen a bunch of bad teams throwing tantrums on the down-low this season, but this was a pretty overt one.

Thank god Marchand was able to avoid the high hit so it just became a funny gif. Shudder to think if that connected.

Morning all. Haven’t been paying too much to other teams around the league so I didn’t realize the Sharks were such a dumpster fire.

Neither did I. I look at the standings from time to time but it really doesn’t hit you until you the see the team in action.

I subscribe to the Stathead hockey newsletter – one email per day with a bunch of stats about the previous day’s games. Only takes a minute to skim through but it really helps to keep abreast of the leaguewide situation.

Didn’t know just how bad they were until I scanned for basic stats to make the game thread.
They’re literally the worst 5×5 team in the league. Even though there are a few teams with worse records *cough* *Ottawa* *cough* the Sssssssssharks are pretty much the worst team out there.